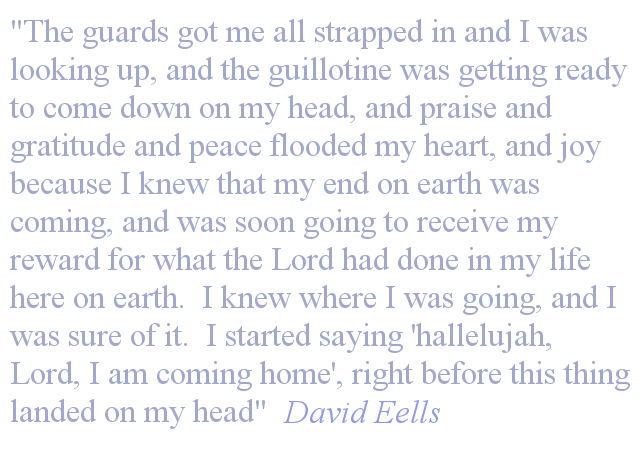 David Eells had a dream about martial law and the mark of the beast.  In his video “Christians Will Take The Mark”, he describes what happened when UN Troops arrived on US soil.

I was in a mid sized American city.  Larger than Pensacola, but smaller than the larger cities, like Chicago. In the city, chaos and panic were taking place.  Martial law had been implemented and the streets were flooded with people panicking and UN troops – The UN being the United Nations.  I was filled with the Holy Ghost, as I remember it in this dream.  In this dream, my life on this earth was soon to be over.  I knew it.  I believe this dream could be a glimpse of what my end could be.  I believe the Holy Spirit prepares people for things to come.

In this dream I was running from the UN Troops, and I hid in the crevice of this high rise building.  It had a small entrance way, nobody could get in there. as you had to be really skinny to get in there. I was being chased by UN troops.  These guys were in full combat riot gear and they had a black police style fatigues on.  They were wearing black combat boots, black shirts, with white patches on their shoulders which said the UN, they had black bullet proof vests on, riot helmets and they had a fully automatic firearm on one arm, and they were well prepared.  They had what appeared to be mini tanks and paddy wagons on the street where they were gathering up people.

After having that dream, I looked into the technology that they have, and they do have a lot of advanced technology, far beyond what we can even comprehend.  They found me out, and I came out of the crevice building.  I was filled with the Holy Ghost, and was submissive to the authority, that the Lord had placed over me, which was these people.  They threw handcuffs on me, and brought me into what appeared to be a paddy wagon.  They shipped me off to a large gymnasium.  As I entered into this large gymnasium, there was two lines in front of me….real long.  At the end of these two lines, were these tables established with two government employees, and at the tables there were ladies.

The people in this line, a lot of these people were from church.  Most of them however, were regular folks, ….you know citizens.  A lot of them were from church.  As I first entered into the gymnasium, at the very front of the line, I saw them take one person, and take them to this part of the building, to my right, and they took them into the room, where nobody knew where they were taking them.  I had my own ideas, but I wasn’t for sure.

Everyone else was willing to accept what they were doing, and everyone INCLUDING the brothers and sisters that,……well that I believed were the brothers and sisters from my church were entering into the other room, and after they entered that room, the whole side of the gymnasium, you could see glass, you can see outside.  They were exiting this room, admiring their new microchip implant that had just been injected into their right hand.  They were outside the perimeter of this building. Around this building was barbed wire.  They were actually able to leave the area and go back into population.  After they got their new micro chip identification.

It grieved me, because I saw people from church accepting this thing.  I believe that thing was the mark of the beast.  The thing is, I didn’t feel sorry for those people, because I realized that weren’t really my brothers and sisters, that they had made their decision was to choose what I believe was the mark of the beast, and they had chosen death.  The bible says if you receive that thing, your going to burn.  I didn’t have any kind of feelings towards those people.  My focus was dead set on the Lord.

When I reached the front of this line, I got ushered to one of the tables, and one of the ladies there, started asking me for all of my information.  She asked me for my name, my social security number, my telephone number, my address, and all my information.  I gave it to her, I answered each question.  I felt like a double portion of grace and mercy, and peace rise up in me.  I really felt the fire of God, start to be stirred within me.  It was almost as if the closer I came to my flesh being killed, the closer I got to being at peace.  I knew where I was going, I knew the Lord …and I knew the Lord was in me.  As far as I was concerned,  I was already dead, because Jesus lived in me.

After I got to the table after she asked me all these questions, …the lady asked me ‘Are you ready to receive your new micro chip implant’….and I looked at her and was kind of amazed and marveled at her in amazement, at how people could be so diluted, and blind and not know the truth.  The bible clearly tells us about these things to come.  You would have to be seriously blind or diluted not to know.  I said ‘excuse me ma’am, I will have nothing to do with that.  I believe in Jesus Christ, and I believe that is the Mark of The Beast, I will have nothing to do with that.  She looked at me and said ‘oh, well, you need to put those kind of thoughts to death right now’  And she said ‘read this’, and handed me a piece of paper.  She said ‘come back after you read this’.  I glanced at the heading and it said 101 reasons why you should receive the new micro chip implant.  Listed were all the benefits to this.  I guess if you were an average citizen, you would think it was an excellent thing.  Stop crime, no missing children anymore…It solved a lot of problems.  It seemed like an excellent benefit program.  The only thing is, this paper didn’t list all the down sides to it.

So I looked at this paper in horror, and crumpled it up, and felt even more of the fire of God come through me, righteous indignation rise within me.  Almost as if fire could shoot out of my eyes, and blow this table in front of me.  I felt burned up inside, at this lady, at what she was asking people to do.  I crumpled this paper up and threw it on the ground, and I looked at the lady, and said ‘look, lady, I cannot deny that Jesus Christ is Lord of Lords, and King of Kings, and If I were you I would chop off my right hand and beg for his mercy.  The lady looked at me, and just laughed.  I guess I amused her.  She said to a close by guard….’we got another fruitcake’.   Here, take him over there. I was the ONLY one, since I got in that whole line of two major lines in front of me.  When I first came in there, there was one person, out of the whole line that went into this room.  I was the only one since that person.  There might have been anywhere from one hundred to two hundred people that went before me.  So there had only been one person, other than me that didn’t receive this thing.

They ushered me up to the room where they had a guillotine in there.  That kind of surprised me.  None of the dreams surprise me, they all sort of happen how I thought they might happen.  The thing is I was brought up to believe that we were going to be raptured before all that happens.  The Holy Spirit has led me to believe otherwise sine then.  The guards got me all strapped in and I was looking up, and the guillotine was getting ready to come down on my head, and praise and gratitude and peace flooded my heart, and joy because I knew that my end on earth was coming, and was soon going to receive my reward for what the Lord had done in my life here on earth.  I knew where I was going, and I was sure of it.  I started saying ‘hallelujah, Lord, I am coming home’, right before this thing landed on my head….and then I woke up.

Technology For The Mark Of The Beast?  Posted On America’s Last Days Blog

Years ago I had a dream from the Lord of the future technology in the world. I was in a dark room viewing the stars sleeping trying to wake up. I could see the hot red embers of a black beam fallen at my waist. As I struggled to awaken myself i could see others sleeping all around. I awoke and escaped this room to the left.  As I left the room I walked in a hallway with 2 other doors. I broke these doors open  to wake people up in these rooms but no one was able to free themselves from the deep sleep.  I looked in the 2nd door from my room and I could see a woman asleep clothed with a golden metallic sash. She did not awake herself. I then looked at the 3rd room to see a pail skinned man clothed with a metallic electronic covering. His face had the expression of bliss as if he were in some kind of trance.

The Interpretation begins with the tower falling on 9/11 and the hot embers of explosives at the base of the tower which burned for weeks. I woke up to the truth of 9/11 and the hidden works of the government and there plan for economic collapse I then saw the sleeping woman with a safety metallic electronic sash. This may be the birth of a new electronic fabric used to keep people safe. I then saw a man in a trance covered with this material. This may be and electronic skin tattoo of some kind used to keep this man under a new form of mind control. I would normal dismiss this dream but they just came out with new metallic electronic skin tattoo microchips for health and brain wave scanning.

“The camps all have railroad facilities as well as roads leading to & from the detention facilities. Many also have an airport nearby. The majority of the camps can house a population of 20,000 prisoners. Currently, the largest of these facilities is just outside of Fairbanks, Alaska. The Alaskan facility is a massive mental health facility & can hold approximately 2 million people.” Read more at candidcupcakes.wordpress.com