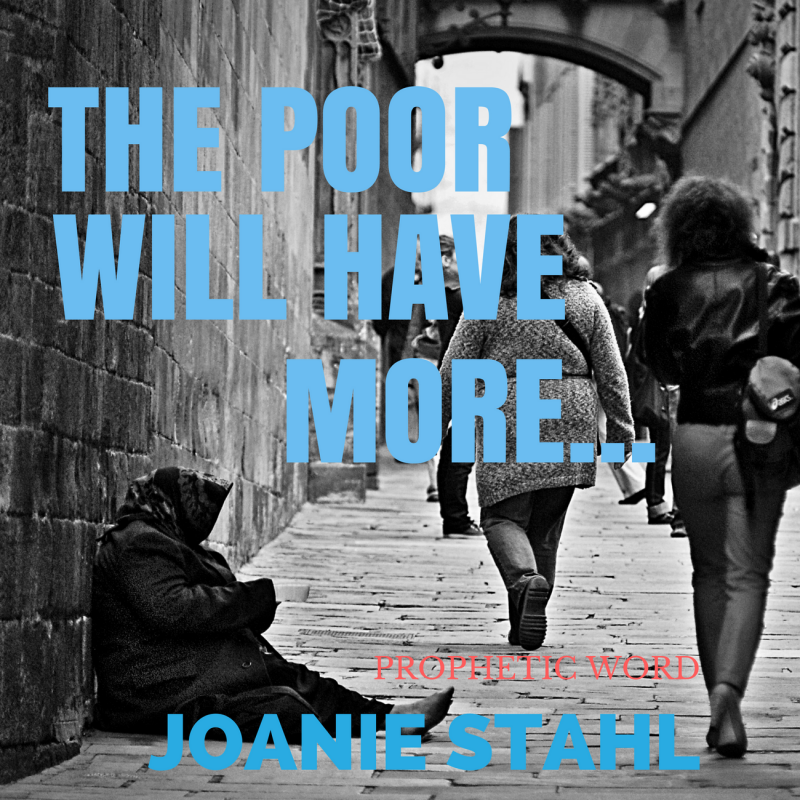 The rich that are prepared are but few and will hide out in the holes of the rocks. They will not share any of their supplies with anyone. Their fear will eat them alive and they will attack and devour each other. They will become like wild animals because they know their wealth will never come back forever.

I am avenging My elect.

Just as the Hebrew slaves who when they ate quail until it was coming out of their nostrils, in the same way have the rich of this world done so. They are nothing more than fatted calves marked for slaughter. For they fattened their own selves in the presence of the poor. They licked up what was left and withheld it from those that begged for help.

Your wealth has corrupted you and sealed you into a never ending, perpetual destruction. A destruction I never planned for you, but purchased for yourselves. You fear nothing. Therefore, a fear, My fear will become your fear. And you will fear Me.

I am going to turn your nation upside down and shake it, even toss it like a ball. When I do this it will be like giving a blind man sight, where as he has lived his entire life in pitch black darkness, and that darkness being all he has known was his light. Yes, you who have blasphemed me every day, and every night, you will be like the blind receiving sight. Except you will not be like the naturally blind who would see and be filled with joy. Instead, you will see it and there is no way out of it. You will feel it most. I will make you see it in it’s fullness and you will not rejoice. You will grieve and mourn.

What I will do will weaken the strong of this world. Those that know Me that are the weak will become strong, like mighty men, like a great and terrible army. You live among them every day. My strong one’s that will arise will arise out of their close places and you will not know it until the very moment I raise them up all at once.

You will be in shock to see who are my mighty one’s. Many of them live next door to you. Many of them live in your homes and those you work with. Many will be those you laughed at, and mocked and made fun of. But they kept praying for you and remained faithful, though you maligned them and cast them out of your presence. Their faithfulness to me on your behalf kept you alive. I kept you alive because of their cries for mercy for you.

These mighty one’s will be like lion’s who will rise up prematurely out of a sound sleep. Their faces will be bold like lions. There will be no mistaking it.

Be prepared. Stand firm. Anoint the shield. Furbish your weapons.

These days are fast approaching and will be upon all humanity, upon all people, all over the earth all at once.

The earth is going to rock. It is going to rock and shake so hard it will knock it off it’s axis. The weather will be come stranger and the skies will become darkened. The sun will not give her light as it once did. Everything will become completely unpredictable. The seasons you have enjoyed, Summer, Spring, Winter and Fall, will become impossible to differentiate.

There will be no more seasons.

There will be an increase of heavy rains so great in areas that will be swept away. Violent lightening will increase with great noise from the heavens that have never been seen or witnessed. Buildings with the tallest stories (the pride of man) will come down like walls with untempered mortar. They will come down like when a little child barely touches his tower made with toy blocks and it falls at once.

There will be great and intensified shaking coming upon all the lands.

This is what I saw in a waking vision as the Lord spoke to me.

I saw the country of Malaysia. He showed me the surrounding countries of Malaysia that they as well as Malaysia, are going to rock and shake very hard. I see violent, cataclysmic destruction appointed for that land.

He showed me the faces of the people beholding the total destruction of their lands. Their faces were pale. I saw mountains around the areas I mentioned slamming down, Not only these nations. The Lord began to show me that this will happen all over the earth. I see mountains crumbling like crumbs in the sight of all the people.

The word of the Lord continued….

The great and violent shaking will be so great it will overwhelm the people They will all be unable to do anything. Psychologically millions will be affected by this great shaking of the earth. Madness will be widespread and all safety will be gone.

When this will happen, everyone that is left will reminisce and remember all the good they once had whether they had much or very little. They will remember the freedom and everything that I handed down to them from Me. This will be the cause and means by which many will turn to me. They will do it enmasse all over the world. They will run to Me.

This is what I meant when I said that the harvest is truly great and the laborers are few.. You will see what I mean shortly. It will not be like it has been over that last centuries of My workers looking for ways to catch men like fish. No, in fact, My workers will not have to do anything to bring them in. For they will run in enormous people groups right into My nets all on their own.

My workers will be overwhelmed with this great catch. But I am and will be among you working with you, giving you the power to accomplish this task. Once this starts I will finish it.
I am the Lord.