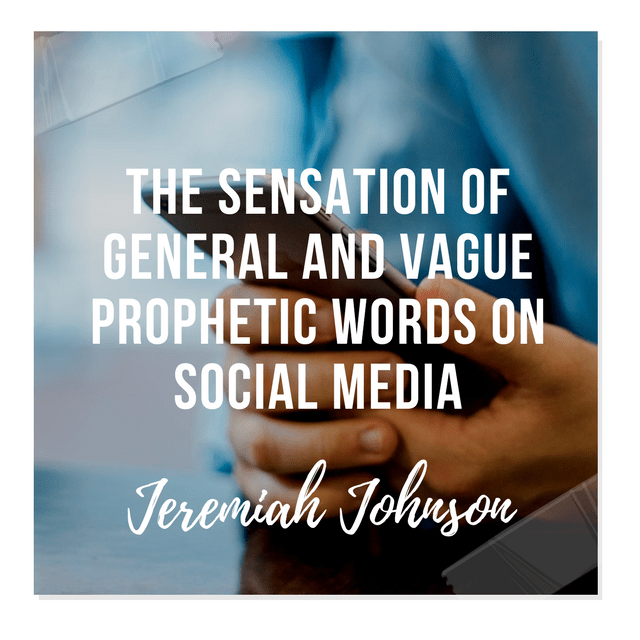 There is a modern day phenomena taking place within the prophetic movement that I believe must be confronted and specifically addressed with love and truth. The sensation that I speak of is regarding the increase and explosion of very general and vague prophetic words being posted on social media and released on popular Christian websites that have little to no SUBSTANCE or SPECIFICS. And because of the lack of content and specifics within the prophetic words, there is no place for ACCOUNTABILITY or even judging the ACCURACY of what is supposedly being said by God.

Let me give you some examples of vague and general prophecy that lacks substance, specifics, and even accountability:

For starters, the prophecies are directed at ANY ONE AND EVERYONE. There is no target audience, person, or groups of people that the prophetic word is specifically directed to. In other words, it’s a horoscope prophecy. How it works is that people simply scan the facebook’s of popular prophetic voices trying to find a status or prophetic video that they can apply to their life or they scan popular Christian websites looking for the latest prophetic word released that again is typically not addressed to a target audience, person, or groups of people and has absolutely no substance or specifics. It’s a bunch of fluff that has someone’s carnal desires and greed at its core. This is horoscope prophecy.

Secondly, the prophecies do not ask for participation, sacrifice, or requirements for those who the word is supposedly for. It’s pretty much a name and claim it one stop showboat. All someone has to do is read the word on social media, claim their prize, and bada bing bada boom, your destiny and desires WILL BE fulfilled.

The explosion and increase of general and vague prophecy across the internet world can be likened to going to a Chinese restaurant and getting a free fortune cookie. Pick one, open it up, and there you have your horoscope prophecy.

The heartbreaking part about all of this is that when we turn to the Scriptures to try and find where all this vague and general prophecy is coming from, YOU CAN’T FIND ANY. You cannot find a single prophet or prophetic word in Scripture that was not prophesying to a specific person, people group or nation and what they prophesied was not only SPECIFIC and full of SUBSTANCE, but it also had REQUIREMENTS from those who received it.

There is so much more for the prophetic movement than promising anyone and everyone upgrades, financial blessing, more glory, angel feathers, gold dusts, property, and more. People can keep scrolling Facebook and popular Christian websites for their monthly prophetic horror scope, but I believe that God is calling many of His people to hit delete and unsubscribe from all this shenanigans and tomfoolery.

A HUNGRY COMPANY IS EMERGING

God is raising up a company of prophetic messengers, intercessors, and saints in America that are hungry for the word of the Lord that has weight, substance, and specifics. They are hungry for revelatory prophecy, not spontaneous prophecy. They must not be ashamed of their appetite for the deeper and weightier matters that are upon God’s heart.

May we heed the warning that Jeremiah gave in his day when God said, “There are people prophesying that I have not spoken to and there are people traveling and ministering that I have not sent.” (Jeremiah 23:21) May this blog be used to stir up healthy conversation, dialogue, accountability, and a wake up call to the prophetic movement and the body of Christ. The need has never been greater.