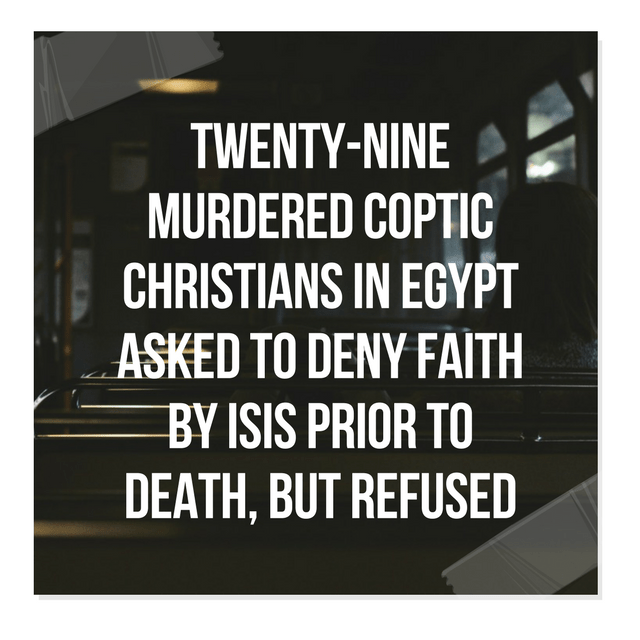 Father Rashed, a chaplain for one of the groups comforting the survivors of the attack, said in an article in Breitbart News on Sunday that ten masked Islamic State militants did not simply open fire on the bus on its way to the Monastery of Saint Samuel the Confessor.

Instead, the IS radicals apparently stopped the bus, made the victims walk out, and asked each of them, including the children, whether they were Christians.

Rashed explained that the victims “were asked to renounce their Christian faith and profess belief in Islam, but all of them — even the children — refused. Each was killed in cold blood with a gunshot to the head or the throat.”

Friday’s attack, at the start of the Islamic holy month of Ramadan, was another devastating blow to Egypt’s minority Copts, who in the past year have suffered a number of massacres at the hands of Islam, including Palm Sunday church bombings that killed 46 believers.

Egyptian President Abdel-Fattah el-Sissi has tried to assure Coptic Pope Towadros II that the attackers in the latest tragedy will be punished.

The Coptic church has warned that despite the government’s efforts, however, IS radicals, who on Saturday took responsibility for the slaughter, “damage Egypt’s image and cause Egyptians a great deal of pain.”

Meanwhile, many in the media did not report that the Coptic Christians were killed for their faith, rather they stated that the IS just simply murdered them in cold blood. But the crucial detail is that the Islamists attempted to make the Christians renounce their faith in Jesus Christ.