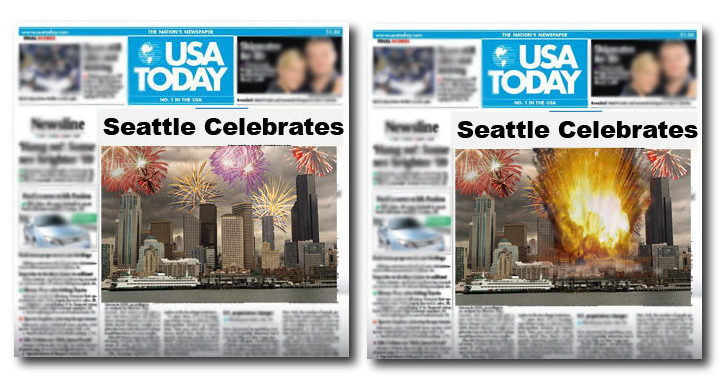 I had a dream about a terrorist attack on the City of Seattle. This dream occurred on the night of October 12, 2010. I have shared this dream on several radio programs including mine and also on Hagmann & Hagmann on January 30, 2014

I was in a downtown area of an unknown large city. I saw a newspaper vending machine that sold the USA Today newspaper.

I decided to purchase a copy. I did so and held the paper in my hand.

One the lead stories was about Seattle, Washington. It had a full page photograph of the City of Seattle.

The Headline Read – “Seattle Celebrates.” The letters were huge across the page.

As I was looking at the photograph, the photo turned into a movie. It was like I was watching a TV screen in the newspaper. The fireworks became live images of motion with sound. I could hear the loud boom of the fireworks. I watched many of them go off over the skyline of Seattle.

As I watched the display, there was sudden explosion. One of the buildings erupted into a ball of fire, smoke, ash and debris.

The plume rose as high as the tallest downtown building in the photograph. It looked similar to the explosion that we saw on 911 on the World Trade Towers. I am not sure if the building collapsed.

After the explosion, my vantage point changed to the sky where I was looking down on the damage. There was debris and ash scattered throughout the downtown area. There were also many crushed cars with ash all over them.

I do not know when this event will occur. I also do not know the cause for the celebration. What I do know is that fireworks were involved and the explosion was unexpected.

I often wondered if the celebration was because of a holiday or some other event.

Conclusion – I do not know! Again, I had this dream over three years ago.

Several things about this event, the explosion that I saw did not flatten the entire downtown area. The damage seemed contained to one building. Therefore, I do not know the type of device that was used.

For those who might live in the Seattle area, it did not appear to be a nuke that went off. Not this time, at least. It appeared to be more of a conventional explosion.

I decided to once again share this dream because as most of you know, the Seahawks won the 2014 Superbowl and are now a Championship Team.

Their string of championship victories may now extend several years into the future. And being that they a now a higher caliber team, the possibility for future victories is now a reality.

For the record, I do not know when this event will happen. I am also am not saying that this event will be associated with their recent Superbowl victory. An event like this could occur after another championship victory in the future or be related to something else. The one thing that I do know is that it happened during a city celebration of some kind where fireworks were involved.

I want to encourage all of God’s people to be praying for His covering and His protection, because as time progresses, we are going to be seeing these type of things take place in many places around the country.

If there are intercessors out there that can pray against this, I would like to encourage that you hold Seattle in your prayers. If this prophetic dream was a warning that an event like this can be stopped, then we need need to be praying that God would stop it from happening.

Perhaps He will be merciful.

May God bless you, protect you and keep you under His wing.

In His service,
Nathan Leal