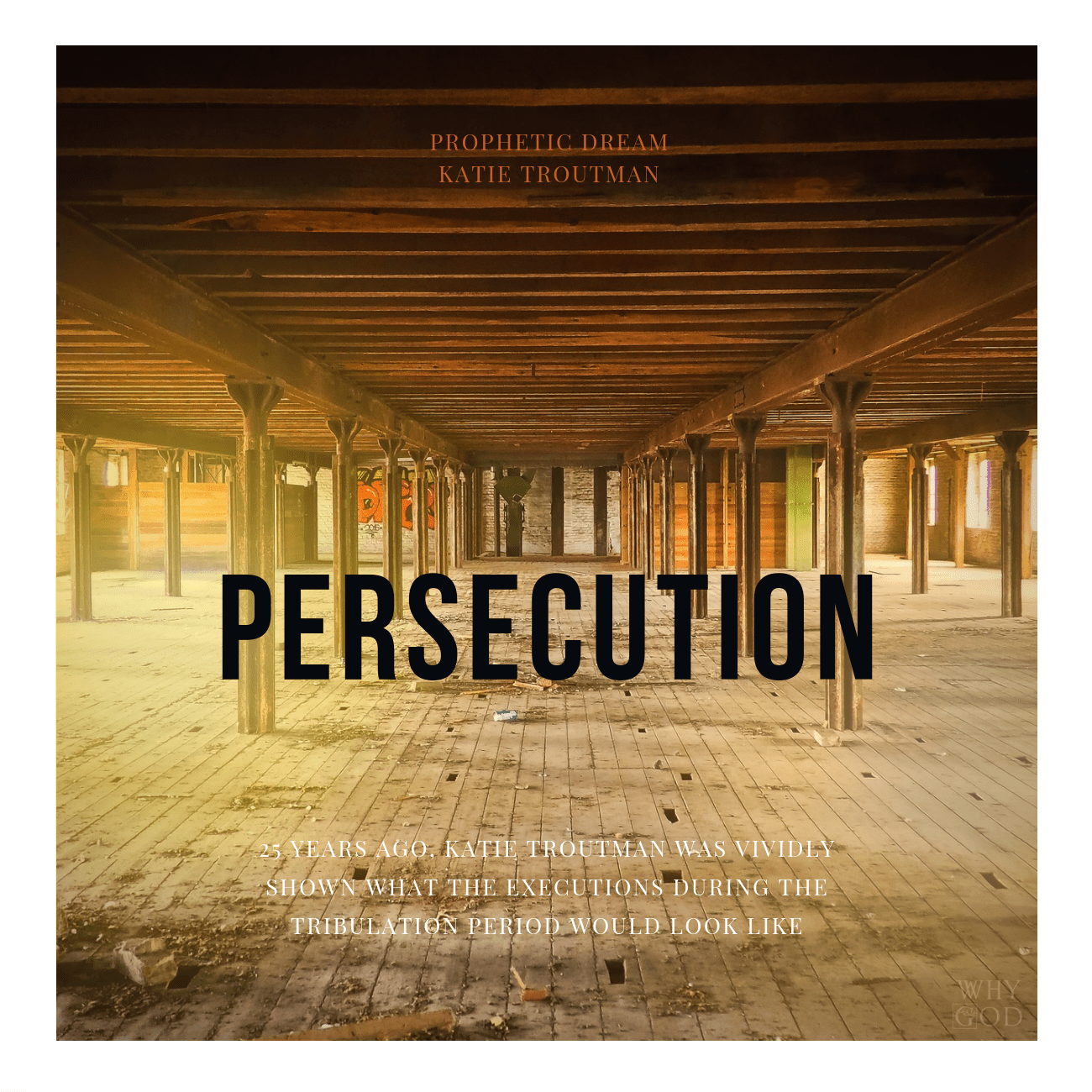 Source – The Most Important News

The Scriptures tell us that the persecution of Christians during the Tribulation period will be extremely brutal, and even now the persecution of believers is on the rise all over the planet.  Just recently, Katie Troutman sent me a series of key prophetic dreams that she has had over the years, and this first one that I am going to share with you is deeply alarming.  About 25 years ago she had a dream in which she saw what the executions of Christians during the Tribulation period would look like, and it is extremely sobering…

I had a dream approximately 25 years ago that I knew was from God. I was a young Christian at the time of only a few years.

While I didn’t understand it’s full meaning until recently, I understood enough , for that season of my life.

I had just gotten home from church and laid down to take a nap. I woke up sweating and crying and shaking back and forth.

This was the first end time dream I had ever gotten. Although at the time, I didn’t realize that is what is was.

It was also the scariest one I ever would receive.

It was so vivid and real. I remember it as if it were a lifetime memory, a place I had been and people I talked too. I have carried it and others with me all of these years.

This is a hard one to share or even talk about because honestly it is my greatest fear.
Now that I have understanding of what this place probably is.

I was in what looked like a huge warehouse.

It was dark and dingy almost pitch black. There was a conveyor that went straight up to a tower. It looked like a guard tower in the middle and to the side of this humongous warehouse room.

There were tons of people packed in there.
It felt like I was around a bunch of criminals.
They were all dirty and they were bloody and maimed.

All of the sudden I was sitting at the top of the guard tower by the conveyor belt. I was sitting on the platform with my knees up to my chest crying because I didn’t want to be there.

It felt so dirty and gross. I was scared.

They had people strapped on the conveyor belt coming up one by one and they were beheading them.

I didn’t know at the time this was going to become our reality. I was young and just growing in the Lord.

The man looked at me in the eyes reaching out his hand and said “Please talk to me. ”
and I said ” I don’t wanna talk to you. I don’t wanna be here. ”

He said to me. “Please talk to me, you’re the last voice I will ever hear.”

All of the sudden a light went off in my head that I could see physically. It shone brightly in the darkness and I thought I have to tell them about Jesus. I have to get them saved.
I only had thirty seconds for each person and they came so fast. I was literally racing as fast as I could. Telling them you are going to go to hell if you don’t get saved by Jesus Christ and I led them very quickly in a sinners prayer and boom the next person was up and the person I had just talked to was killed.

One by one they came. I didn’t think I had enough time, I remember feeling so much pressure. There was no time left and I was tripping over the words because I had to race so fast. I was telling them , ” Do you believe Jesus is the Son of God and He died on the cross for your sins? He rose on the third day and defeated the devil so that you could be saved. Now say it with your mouth. Jesus is my Lord. ” – and then they were beheaded.

I woke up crying literally and saying no, no, no and shaking back and forth.

I didn’t know at 21 years old what it was exactly I had just dreamt of
My understanding was simple. People are going to hell and I need to tell then about Jesus. I didn’t understand until maybe seven or eight years ago what it really meant

I hope I never find myself in that place. It wasn’t a pleasant experience…thats for sure.
– But I have an understanding of what that place is now.

I’m older now. Emotionally speaking, I have the word of God built into the tablet of my heart and mind. I understand that I’m not to walk by feelings but by faith in the Son of God.

I understand that to die is gain but I’m still scared of that place I saw and knowing its probably a reality for me and maybe some of you reading this.

Truthfully speaking, I still don’t wanna be there and I am afraid it’s my fate.

I pray every day for God to deliver me from that but as I’m writing this , I realize I need to pray for His strength and that if Jesus went through what He did for me. I can suffer for a little while.

We need to save them and pull them from the fire. They are dirty but so are we.

Kenneth Bae In A North Korean Work Prison Camp Changed His Prayer From “Send me home, Lord” to “Use me.”

How To Get On Fire Again- Is Our Wealth Snuffing Out Our Inner Fire For God?