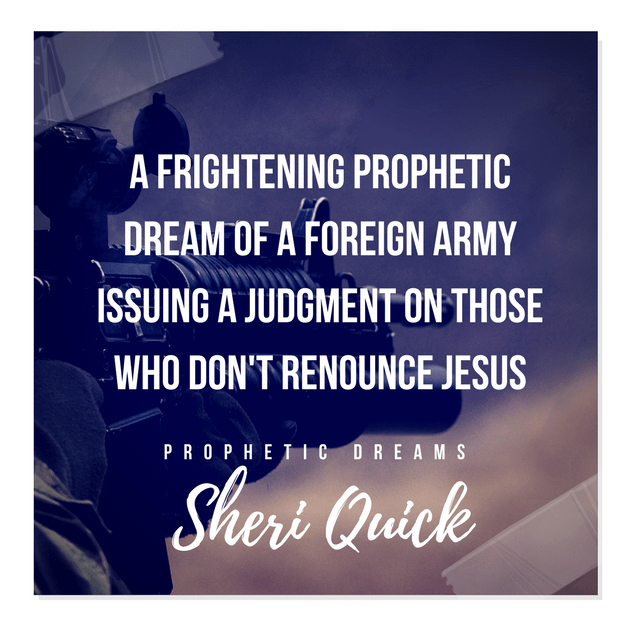 I was in a large building like a school auditorium. I was standing in a line with about 100 or so people. I was being detained in this building. There was a large table at the front of the room and there were military guards sitting at the table. They were wearing green military clothing. They were not American military. On the table was paperwork that pertained to all the people who were standing in this room with me.

As I am standing in this room I see a military guard walking around the crowd. He is holding a machine type gun in his hand. He is listening to everything the people are saying. I start praying in my mind for all these people. Then a long line of teenagers is being forced into the room with all of us people. A military guard is telling them to move along. I look over at these teenagers and I see most of them crying. They are afraid. My heart was breaking for them. I yelled across the room to the teenagers and told them to call upon the name of Jesus! Then the guard who was walking among the crowd looked straight at me and yelled at me so everybody in the room could hear his voice. He told me and everybody in the room that the name of Jesus is forbidden in this place. The only god is Allah and if the people wanted to talk about a god they could only speak the name Allah. Well, in my mind I was thinking,I know God is Jesus and I for one will never call Allah my God.

Right after that incident I was out of the auditorium and I was standing on a hill. I could see a train stopped on a train track. There were military guards dressed in the same clothing as the guards in the auditorium. The guards had stopped the trains and were forcing out the train drivers. I then saw trucks on highways and the same guards had stopped the trucks and were pulling out the truck drivers.

Next I was back in the crowd at the auditorium. I saw these big guys who were mad. They were the truck drivers and the train drivers and they were forced into the building with all of us other people. One big guy was saying to the guards, ” You cant do this to me, don’t you know this is America!” I was looking at this guy and I told him, ” don’t you understand what is happening here”? He just looked at me without saying a word. It did not matter what I told him because he believed that America is invincible and that was his saving grace, not Jesus.

Next I was called to the front of the room. I stood in front of the big table with the military guards sitting there. Everybody in the room was quiet. The guards asked me who my God is? Immediately all kinds of thoughts went through my head. I was scared. I was telling myself that I could trick these people and tell them that my God is Allah, that way they will let me live, but in my heart Jesus is my God, or I could just tell these people the truth, that Jesus is my God and then they will shoot me and I will die. I was afraid to be killed, I was thinking, will it take a long time for me to die? will they torture me first? will it hurt? All kinds of fearful thoughts were going through my head. I did know in my heart that if I told these guards that I do believe in Jesus that immediately God would take my spirit with him. So many whats? ands? ifs? and buts? were going through my mind.

Then I heard the Lord speak to me while I was standing at that table. He told me that I have made man my judge. He said that there are many Christians today that call themselves Christians but they do not do the things that God wants them to do. They talk the talk but they do not walk the walk. God loves them and wants them to surrender their whole lives to him. He then said that since the day that the twin towers fell he has given his children time to get closer to him. This is a time for all people who call themselves Christians to get right with God, to devote our whole lives to him, not just pieces of our lives. The day is coming when America will fall, and I will stand at a judgement table before a man. I need to trust in the Lord totally with my whole heart, with my entire life. When the time comes at the judgement table there will be no fear of the kind I experienced, no questions of doubt, only peace and assurance that comes from knowing God as savior IF I am walking with God with my whole heart. There is no fear with God, their is no fear with those who walk with God. God is the judge, not man. Christians in America need to surrender everything, every single thing to God now while there is still time. This is not a time to retreat.

Then I looked around the room and the guards told everybody they could go home. I then woke up from this very real dream.