Republished From “A Vision of Shock & Awe for America” by Dean Odle, September 8, 2014

“And such as do wickedly against the covenant (those who reject God’s Word and live in sin) shall he (the Antichrist) corrupt by flatteries: but the people that do KNOW their God (Jesus Christ) shall be strong, and do exploits. And they that UNDERSTAND among the people shall INSTRUCT MANY: yet they shall fall by the sword, and by flame, by captivity, and by spoil, many days” (Daniel 11:32-33).

I saw a vision in our Wednesday prayer meeting on September 3, 2014. As we prayed for revival and asked God to have mercy in the midst of His judgment on America, I saw the USA from a slightly elevated place in the southern US. From my vantage point, I could see the Midwest states all the way to California. I was looking out west and as I referred to America as “her” in prayer, I saw the United States as a woman laying on her back…unconscious. She was in trouble and about to die from heart failure. From her head to her feet she stretched from the west coast to the east coast. Then, I saw two giant hands holding the paddles of a defibrillator and placing them in position on her chest to shock the woman’s heart back from the edge of death. The woman was hit with the electric shock so hard that she lifted off the ground a bit as her muscles contracted. At this point in the vision, I knew that her heart was brought back to beating properly, but I also knew that she was not out of trouble completely.

It was then that the Lord revealed to me that it would take a great SHOCK to bring America out of total heart failure. And this was in the context of praying for lost souls and a backslidden lukewarm church. Thus, it was confirmed to me again that the spiritual “heart” condition of America is so bad that it will take a great SHOCK to save us from total destruction and many more being lost to an eternal hell. The mass rejection of God and His Word the Bible in America has been greatly due to the weak preaching, greed, lust and idolatry of our churches and church people. And thus, many have hardened their hearts to the true message of eternal salvation that comes through repentance of sin and faith in the Lord Jesus Christ.

That is why God is going to allow America to be hit hard by her enemies. He will not be the one doing it, but He will remove His hand of protection. The coming attacks will be a greater shock than 9/11/2001. This shock will cause even the most calloused American to tremble in fear. The confidence and pride of Americans will be shaken. But in that shock and pain, there will come a genuine revival. Hearts will begin to return to God Almighty and people will return to church. They will be hungry for answers about the future and what the Bible has to say about the terrible events that are transpiring around the world. They will want to know about the return of our God and Savior Jesus Christ and how they can be ready for that day or their death. It will be a time of great harvest as the world descends into chaos, WW3, and the Antichrist rises to power. (And yes, the church of Jesus Christ will still be here to reap this great harvest of souls and to face the persecution of the Antichrist).

This is the Scripture that I kept hearing as I saw this vision and continued to pray with our church prayer group:

“With my soul have I desired thee (God) in the night (dark time); yea, with my spirit within me will I seek thee early: for when thy judgments are in the earth, the inhabitants of the world will learn righteousness” (Isaiah 26:9).

The world must learn again that righteousness can only come by faith in the sinless blood of Jesus Christ and His resurrection from the dead. And that when we accept His righteousness, we also discover that He has called us to walk in righteousness, obeying God’s Word as revealed in the Old & New Testaments of the Bible. The world will also learn that this faith and repentance will lead to a supernatural encounter with the living Jesus Christ of Nazareth. There will be a clear sense of being loved, forgiven, and called to share how Jesus Christ has saved you or restored you to that place of relationship with our Creator. For those who have never experienced that presence of God, Jesus called it being born again (John 3).

“A little over one year ago (June 11, 2014), the Lord Jesus spoke to me as I prayed and said, “Watch Portland Oregon.” I found that strange as I have never been to Oregon nor did I know anything about Portland. But as I have continued to do that I just saw an article in The Portland Tribune from June 25, 2015 (the day before the Supreme Court announced their ruling on gay marriage) talking about how gay political action groups in Portland really spearheaded and led the way for gay marriage in America. The article stated that conservative Christians were the enemy and they admit how they manipulated people with emotionally charged ad campaigns. So I am going to continue watching Portland and the rest of Oregon as I know the judgment of God is not far off. ” Dean Odle 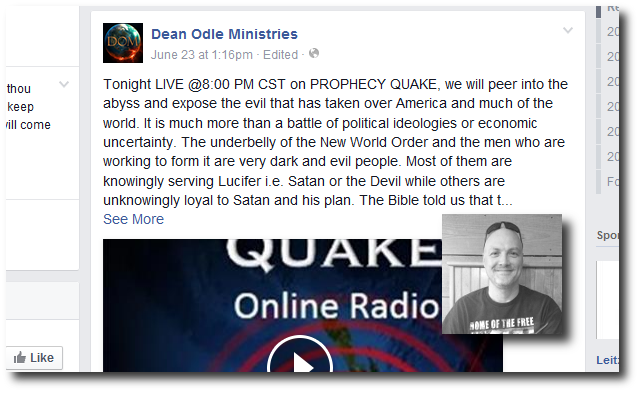