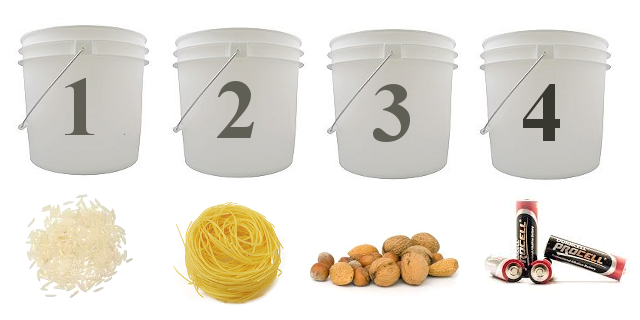 My friend Patricia had a dream in 2009 where the Lord gave her a dream in which she was to prepare food and emergency supplies.

While she admits there are some items on the list she doesn’t quite understand…(bleach, roll of plastic, duct tape), she has been obedient to the vivid dream.

She has shared her dream with others and many people report back to her that they have been able to prepare their homes after the model that the Lord gave Patricia in her dream.

I cannot help but to think of this post, where Rick Wiles also heard from the Lord in regards to preparing, and saving up some items for other people :

I dreamed the same dream in the exact same order 3 times last night. I was sitting at a large round table with a piece of paper and pen. I felt the presence of the Lord behind me – He spoke to me saying, “Write this down.”

5) You will have to be prepared in order to be the church.

A comment from Sharon “Interestingly I have heard several messages on the Plastic and Duct tape. If a volcano erupts, the air is like breathing glass. One should select the most air tight room of their home, and cover and tape off all areas around doors/windows/vents. Also I had dialogue last yr with a book author about Ebola, she was not a believer, but wrote me a long email telling me to get plastic and duct tape if there are plagues, illness, diseases, outbreaks, etc, you will want to do the same with your home if there is a major outbreak OR you may even need to quarantine yourself or a loved one. And also I heard to get BLACK plastic sheeting, to block out any light in your home to the outside to not draw attention to your place if you have solar lights etc”

A comment from Renee “I have solar stuff in my kits. Not visible stuff, but, things like chargers, a small generator, etc. I have them in my faraday chest for now. I packed food in mylar and used oxygen absorbers. I have them stored in the attic in Lowes 5 gallon buckets. I figure in the attic in those, maybe they will think they are just paint if searched. They are covered with insulation in corners. I have bought a bunch of survival/prep manuals too for instructions and have them put away. Luckily, my house has a metal roof and not a lot of windows.”

A comment from Renee on her faraday chest “I did the trash can one lined with cardboard got the aluminum tape for the outside. It is solid! It took about an hour to put together……You put anything you want to keep in it that could be destroyed by an Electronic Pulse attack. Radios, laptops, batteries, solar panels, phones, etc… (I have an implanted medical device that requires being plugged in and charged on occasion – so the battery back is in it). It keeps it safe from these attacks.”

“And I saw, so I saw a volcano erupting in the North West part of the United States”Sid Roth welcomes John Paul Jackson 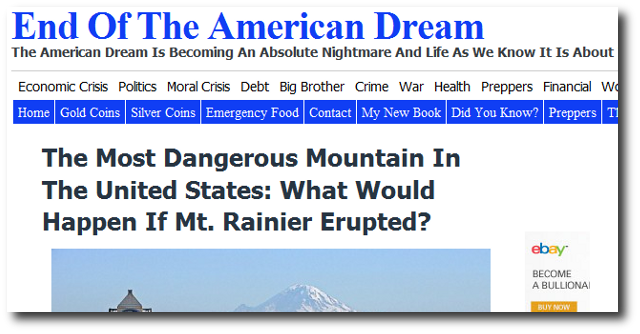 Is the next major volcanic eruption in the United States just around the corner?  Mount St. Helens and the Yellowstone supervolcano get most of the attention, but many geologists are actually far more concerned about the potential danger that Mt. Rainier poses.  It has been called a “time bomb“, “the most dangerous mountain in the United States” and “one of the most dangerous volcanoes in the world” due to its proximity to major population centers.  Scientists tell us that it is a matter of if, not when, the next eruption will happen, and even a minor eruption could result in tens of thousands of Americans being literally buried alive in super-heated mud.  So what would a full-blown eruption do?  It would potentially cause death and destruction on a scale that is almost unimaginable.

If Mt. Rainier were to erupt as powerfully as Mount St. Helens did in its May 18, 1980, eruption, the effect would be cumulatively greater, because of the far more massive amounts of glacial ice locked on the volcano compared to Mount St. Helens[33] and the vastly more heavily populated areas surrounding Rainier.[38] Lahars from Rainier pose the most risk to life and property,[39] as many communities lie atop older lahar deposits. According to the United States Geological Survey (USGS), about 150,000 people live on top of old lahar deposits of Rainier.[8] Not only is there much ice atop the volcano, the volcano is also slowly being weakened by hydrothermal activity. According to Geoff Clayton, a geologist with a Washington State Geology firm, RH2 Engineering, a repeat of the Osceola mudflow would destroy Enumclaw, Orting, Kent, Auburn, Puyallup, Sumner and all of Renton.[32] Such a mudflow might also reach down the Duwamish estuary and destroy parts of downtown Seattle, and cause tsunamis in Puget Sound and Lake Washington.[40] Rainier is also capable of producing pyroclastic flows and expelling lava.

Most people don’t even know what “lahars” are, but they can be exceedingly deadly.  Just imagine a tsunami of super-heated mud that is hundreds of feet thick traveling at highway speeds.  In fact, scientists believe that Mount Rainier is capable of producing massive lahars that could move at speeds of up to 50 miles per hour…

Heat from an eruption will melt ice and glaciers on the mountain and turn them into mudslides moving up to 50 mph, with the potential to be more than 400 feet deep in nearby valleys. Rainier has had a history of lahars, ranging from more than 5,600 years ago to only 500 years ago.

The largest of these debris flows – the Osceola Mudflow – occurred 5,600 years ago, covered 212 square miles of land from Rainier to Kent and was hundreds of feet deep.

The cities near Mount Rainier have early warning systems, but the truth is that once a lahar is unleashed it would be necessary to evacuate hundreds of thousands of people from the region in less than an hour.  Does anyone actually believe that would be possible?  Here is how one author described the danger that residents could potentially be facing…

The numerous towns and cities that occupy the surrounding valley would all be at risk for not only severe destruction, but complete annihilation. Residents of cities like Orting, Sumner, Buckley, and Enumclaw are estimated to have no more than 30 minutes before the lahar, speeding down from the many rivers that flow from Mount Rainier, buries their homes and businesses beneath as much as 30 feet of mud and debris. Even the larger cities like Auburn, Puyallup, and Tacoma itself are not safe. Auburn and Puyallup, with nearly 80,000 residents between them, would be covered in 20 feet of mud in less than an hour, and Tacoma, at almost 200,000, is estimated to be hit with nearly 10 feet from the lahar.

It is hard to even come up with the words to describe how horrific this would be.  It would literally be a “river of death” hundreds of feet high burying everything in its path in super-heated mud.  Once a lahar is within sight, there is no possibility of outrunning it.  The only hope would be to get to high ground in time.

Read more at End Of The American Dream