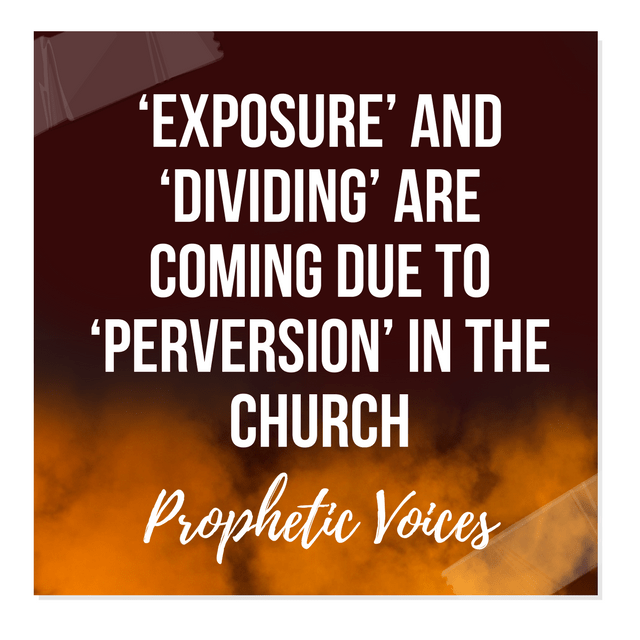 When prophetic voices all over the nation start saying the exact same thing, you might want to start listening.  In the Scriptures, there is a very clear pattern when it comes to judgment.  God always sends warnings in advance so that people can have a chance to repent.  In recent days there has been a flood of warnings for the church in America, and I am going to share a few of those with you in this article.  Considering the fact that there is such agreement in the prophetic community, it would be quite foolish to refuse to take these warnings seriously.

I would like to start with Marty Breeden Steinberger.  He contacted me directly on Facebook the other day, and I have to say that what he has been sharing very much resonates with what is in my heart.  The following is a portion of what he released just the other day…

A demonic Spirit of perversion is going to be on open display in our land. Things, many things are not as they appear……a flood of filth is coming and with it and exposure of things brought to light that most thought were hidden. Even professing Christian churches will begin to display a level of perverse activity that was once thought to only be in the world.

An exposure is coming and it will rock the House of God.

This very closely lines up with what Brenda Brown recently received…

I will enter Churches and there will be a dividing of those who will walk with me from those who serve in word alone. Cities will be torn apart and whole nations will be divided because of people’s offense against Me and the truths of the Kingdom that I will institute in the earth. Many will say, “This can’t be of God. God heals, He does not divide.” Have you forgotten that I have not come to bring peace, but a sword? I have come to set a man at variance against his father, and a daughter against her mother. Member will rise against member and a person’s enemies will be of their own household.

Of course these two examples line up perfectly with a prophecy that I shared in a previous article that ended up going megaviral all over the Internet.  To review, Dr. Patricia Green correctly prophesied the presidencies of Donald Trump and Barack Obama in advance, and now she has been shown that churches in America that are in great sin are going to fall…

Regarding the increase in prophecy, I will show my children what I am about to do on this earth through My prophets. My prophets will arise with this proclamation, “Make way for the coming of Yehoshua. Prepare the way. Prepare your hearts. He will shake the heavens and he will shake the earth with his outstretched arm. This great shaking will usher in great revival. The churches whose foundations are not established on the rock of Yehoshua will fall. Many will be shocked at the churches who fall because those churches put up a good front, but refuse to live in holiness. I will expose the greed, the fornication, the adultery, and the idolatry of these churches. There is a great shaking coming and I will expose the sin. Repent before it is too late.”

For those that take these warnings seriously and want to avoid the judgment that is coming, the solution is actually very simple.

Repent of your sins, get right with God and start living according to His ways.

Unfortunately, there is just so much pride among church leadership today.  Jesus told us that leaders are supposed to be servants, but instead so many are acting just the opposite in our day and time.  In an extraordinary piece, J. Lee Grady recently listed six signs of a “toxic apostle”…

1. A toxic “apostle” requires the title.

2. A toxic “apostle” carries an aura of self-importance.

3. A toxic “apostle” is inaccessible.

5. A toxic “apostle” refuses to work with churches outside his network.

The truth is that on our own we can do nothing, but with God all things are possible.

And if we embrace sin, God is not going to work through us either individually or corporately.  We are moving into a time when holiness will not be optional, and so we need to guard our hearts and our minds.  Whatever we consistently feed our minds will determine who we become, and the world system is constantly trying to shape our beliefs and our values.  The other day I wrote about some disturbing things in the new “Beauty and the Beast” movie, and now today I found out that one of the main characters in the new Power Rangers movie “is questioning her sexuality”…

After we just went through all the controversy over Disney’s first “gay character”, LeFou, in Beauty and the Beast. Now, superhero fans are celebrating a similar milestone with the new release of a classic remake from the 1990’s.  Power Rangers the movie which will be coming to theaters this Friday, will reportedly, feature a character who is questioning her sexuality, director Dean Israelite told Hollywood Reporter editor Aaron Couch.

Trini, the Yellow Ranger, reportedly identifies as queer.  “For Trini, really she’s questioning a lot about who she is,” Israelite explained. “She hasn’t fully figured it out yet. I think what’s great about that scene and what that scene propels for the rest of the movie is, ‘That’s OK.’ The movie is saying, ‘That’s OK,’ and all of the kids have to own who they are and find their tribe.”

This may be very shocking to you, but the truth is that you might find the exact same thing going on in the church down the street.

Thanks to thousands upon thousands of hours of “programming” that our young people have consumed, very few of them have a Biblical worldview today.  I really like how Coach Dave Daubenmire made this point in his most recent article…

America is a mess and it is getting messier every day. If you think I am wrong I invite you to spend a couple of hours with a group of high school seniors.

I don’t care where you find them. I don’t care if it is in a school, at a mall, or, dare I say it, a Christian youth group at your local church. You will be hard pressed to find any of those students who hold and are able to defend a truly Biblical worldview.

If we want to fix things, it begins at home.

Our children need to see parents that truly love the Lord and are authentically living out their faith on a day to day basis.  If our families are a mess, we shouldn’t be surprised when our children abandon the faith once they get older…

“I’ve got to say this as a pastor, as a researcher, as an educator, as just a Christian who cares: the single greatest contributor to the attrition rate [of the Christian faith] has been the breakdown of the family,” Alex McFarland, author of “Abandoned Faith: Why Millennials Are Walking Away and How You Can Lead Them Home,” told The Christian Post.

And on the Millennial front, his co-author, Jason Jimenez, said that when he dug deeper into some of the causal factors surrounding youths’ decision to leave their faith behind, he heard stories of difficult childhoods and homes in which Christian parents didn’t live out their faith, the outlet reported.

We are in a battle for hearts and minds, and the destiny of millions of souls hangs in the balance.

Repentance is always a pre-condition for revival, and anyone that does not want to talk about repentance should not be talking about revival.

A revolution is coming to the body of Christ in America, and at times it will be a very painful transition.

But the end result will be glorious as the army of the last days begins to arise and as we start to become the kind of bride that Jesus deserves.

A great move of God is coming, but God is going to clean up His house first.

So let us all embrace a lifestyle of repentance, and let us all seek the Lord with everything that we have got inside of us.