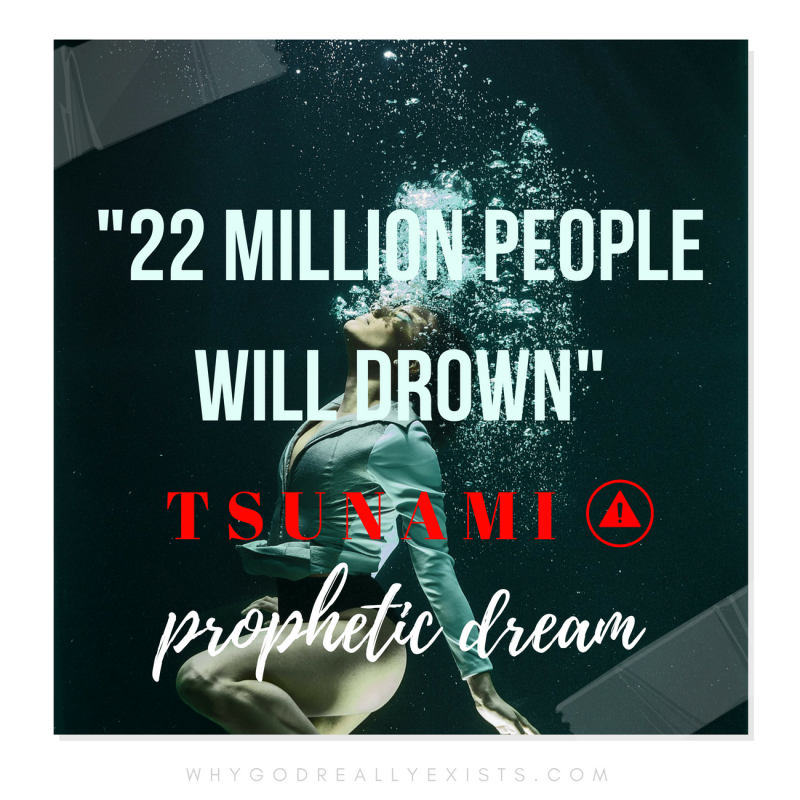 Belinda Brown shares a dream that she got May 16, 2016, and what she heard in the dream was horrific.   She does not know the date, but simply knows what she heard.  In her dream she was talking to a man that she didn’t know, and she said “22 million people will drowned”.  She said this to this unknown man, and then awoke.

Jake Ruchotzke  interviewed Belinda on this dream here, and she revealed another dream that she believes was set in California.  She sees a huge tsunami come in.  The first wave did damage, and the second wave she said that nobody would survive.

What she has seen is what HUNDREDS of others have seen as well.  On one article on a website that collects tsunami dreams, over 200 comments were made of people seeing the same thing.  In my articles listed below, I have seen at least 100 or more of people saying they have seen a tsunani.

PATTERNS IN THE DREAMS

Without Notice – One thing that Belinda Brown’s dream has in common with many of the other dreams is that it happened without notice.  She describes it as “sudden destruction”.

Glass Buildings -Another common theme that she mentions in Jake’s interview is that she was viewing the tsunami from a glass building.  I am not sure why glass buildings are a common element in these tsunami dreams, but they appear quite often.

The Waves Are Hundreds Of Feet Tall – Another thing she mentioned is a large wave coming in, and then a few minutes after a gigantic wave that comes in that goes well over all the buildings in the area.  This is a very common theme that validates these dreams.  The waves are unusually high.  Many people say they cover the skyscrapers.  They often don’t know how to describe them so they say “HUGE”.  Others will give an estimate with stories tall.  Many people see a wave that could go clear over the tallest buildings in New York city.

Rare Mentions –Asteroids Coupled With Tsunamis  Some of the rare visions and dreams that recall this event mention an asteroid.

Rare Mentions –An EAST and WEST Tsunami At The Same Time – Even rarer are those visions or dreams that see BOTH the east and the west coast tsunami’s happen at once.

Jake Ruchotzke is one of the few people gathering up these visions on his channel so stay tuned to what he uncovers as he dives into this topic and uncovers even more dreams and visions relating to the coming tusnami.