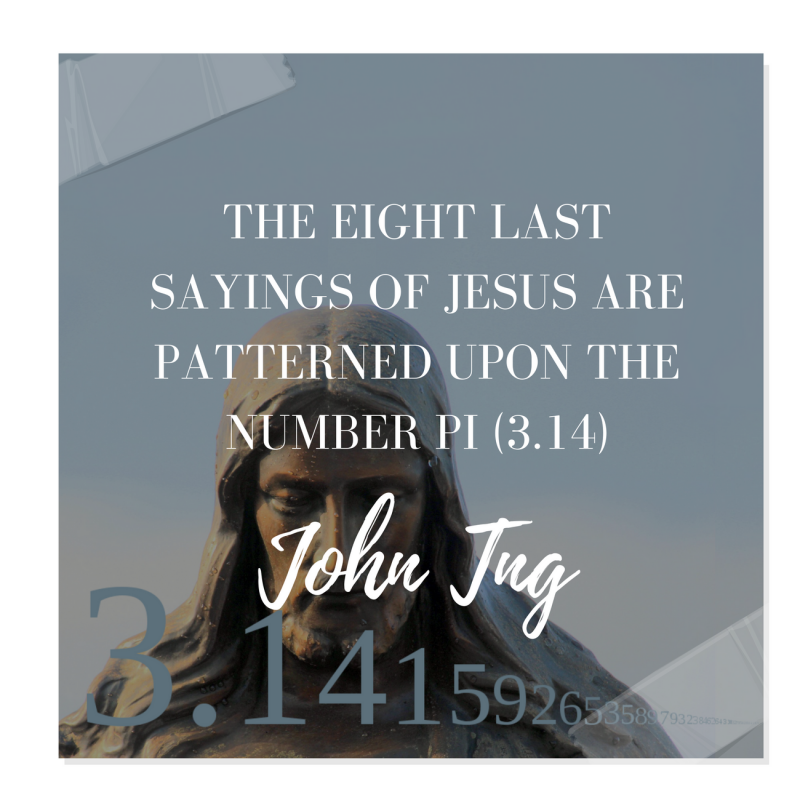 No, I have not made a mistake. There are EIGHT Last Sayings of Jesus from the Cross! The Number Eight proves once again to be the golden key that unlocks the secrets of God. The Eight Last Sayings of Jesus are patterned upon the number PI (3.14) or the Hebrew gematria of Shaddai the Almighty (314)! (see http://www.fivedoves.com/shaddai/pi_1.htm)

Traditionally the words of Jesus in John 19:26 and John 19:27 are regarded as one saying. However, notice Jesus was speaking to TWO persons ONE at a time. He spoke TWO sentences in TWO verses. Granted, the two sayings appear almost as one, but the fact remains they are TWO separate sentences.

Moreover, the distribution of the eight sayings in the Gospels confirms the Shaddai theme — the signature of the Almighty! The eight sayings are distributed in this manner: THREE in Luke, ONE in Matthew, and FOUR in John, i.e. the value of the PI constant — THREE ONE FOUR!

Furthermore, even the positions of the Gospels also confirm the Shaddai signature. The position number corresponds exactly to the number of sayings!

Out of the FOUR Gospels, ONE is without any saying (Gospel of Mark), and THREE are with sayings. Amazing! The Shaddai Number appears altogether three times!

The number 134 is the gematria of the Greek word, HOLY. The Trisagion (Thrice HOLY) sung by the cherubims in Rev 4:8 turns out to be an EIGHT-part hymn!

Rev 4:8 (NAS)
And the four living creatures, each one of them having six wings, are full of eyes around and within; and day and night they do not cease to say, “Holy, holy, holy, is the Lord God, the Almighty, who was and who is and who is to come.”

The EIGHT-part hymn is patterned on the Shaddai theme! The Trisagion is THREE. The Lord God is ONE. The rest of the hymn is FOUR-part — the Almighty, who was and who is and who is to come.

Hence, the EIGHT parts are divided into THREE–ONE–FOUR parts — a perfect PI number, 3.14!

Even without the Trisagion connection, the fact that the EIGHT sayings are divided into ONE-THREE-FOUR (134) sayings, proves its Shaddai theme (314).

This is another instance of the signature of the Almighty found in His Word.