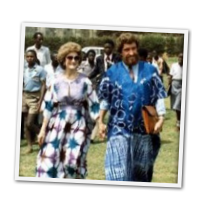 End-Time Vision by Daisy Osborn (the late wife of Brother TL. Osborn).  Daisy Osborn passed away in May 1995.  What she saw lines up with what so many other believers have seen.  Disasters which alter the land of the United States.  She sees volcanoes and widespread fires across the United States.  She sees Christians come together for their survival.

I lay sleepless and horrified, greatly vexed in the Spirit. The Lord visited and showed me things that will shortly come to pass. The JUDGMENT and WRATH of God will soon bring disaster and havoc to the world we live in. The DIE is CAST. God’s clock is set. TIME is running out.

In a VISION: I saw: the face of the earth and the changing of the shape of America. It was drastically altered and reduced in size through terrible disasters. Hunger and suffering were everywhere. The devastation caused by volcanic eruptions and fires were widespread and horrifying during this terrible holocaust.

I saw Christians clustering together from all walks of life and many church affiliations. They did not care about their sectarian doctrines. The tie that bound them in their desperate hour was their common faith in Christ. They clung together as though their survival depended upon each other. After these terrifying cataclysmic events which the Lord showed me all the evils of sectarianism and apostasy vanished among the Christians desperate struggle to draw strength from one another. Those who had been luke warm cast aside besetting sins, and sought identity with the true believers.

Sins were repented of and amends were made. A new sense of values gripped the conscience of Believers. The new morality standard and modern license for laxity, was like a remorseful hangover.

Most of the Christians in the “visitation” were amazed that WE were experiencing the TERRIBLE DAY OF THE LORD!!! and WE were witnessing His WRATH and JUDGMENT!!! Many “social Christians” were ill prepared. Their frivolous, unwatchful, imprudent lives had GAMBLED on Mercy & Grace, which they had thought required no reckoning EVER!!!

I saw hordes of believers lost among the religious and Christ Jesus rejecters. As I looked, I saw where mountains were flattened. Believers were FLEEING to the desert to take shelter in caves & rocks. The DESOLATION was so terrible that it seemed NO ONE would be spared, (Luke 21:34-36 KJV) Matthew 24:20-22) All but a few were full of remorse. Lamentations could be heard everywhere.

It was heartening to observe that during the FEARSOME DISASTERS UNSHAKABLE FAITH held like an ANCHOR among the Christians. They knew they would SOON see the SON coming in the clouds of heaven with Power and Glory.

LaDonna Osborn grew up with miracles all around her. Her famous parents, T.L. and Daisy, would tell crowds of Muslims, “If this man’s not healed, don’t believe anything we say.” Miracles have followed LaDonna her whole life. Now she mentors people hungry to know how amazing God is! See more of this on Sid Roth