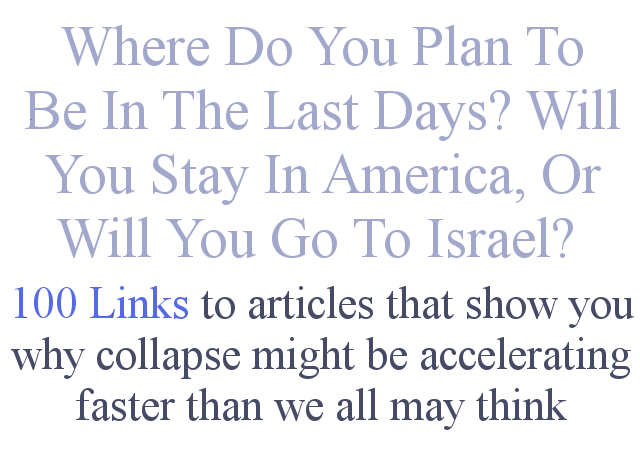 We have all been watching the United States slowly fall apart, and many people speculate that this fall of 2015 will be the start of major unraveling. I would like to have a plan going forward when things do fall apart, and I am sure you feel the same way.

I have been contemplating in my mind someday moving to Israel….where to go, when to go and how we are going to make this journey possible.

If you are a believer, chances are you have also contemplated these things as well. We read in Matthew 24 verse 15, where it tells us the only safe place to be in the days ahead will be in the mountains of Israel. We are told in those scriptures to head to the mountains when the Anti-Christ sits in the temple, and we are not to even look back and get a jacket for the journey.

What does that mean?

It means God has revealed to us ONE safe place to be in the end of days.  While there might be several safe places to go, the scriptures make it clear there is one safe location assured by God.

The Fall Of America, Hard Times In Europe

Many of us have been keeping an eye on the events here in the USA, and we are seeing things rapidly fall apart. A large amount of believers are being told through dreams to stock up food for the coming years. There is a lot of buzz about September 2015, and the next year ahead.

Will there be a stock market crash? Will a Palestinian state be forced on Israel? Some people have seen visions of a massive tsunami hitting the east coast. Others have seen suitcase bombs going off in many cities around the United States, that may be connected to ISIS. Many have seen visions of a massive earthquake hitting California, which results in a large piece of land being thrown, or sinking into the sea. Many people have seen visions of the New Madrid opening up a huge gulf in the middle of the United States when Israel’s land gets parted, such as what Shane Warren saw. Some of these events may happen this year, or in the years to come. We are all just guessing when they will take place.  Many of these things are discussed in Michael’s new DVD which tells us why America is soon to collapse, and the good news that is promised in the word that most churches ignore.  God DOES have a plan laid out in His word.

These things are coming to the United States, but hard times are also coming to Europe.

So… back to my original question:

Where Do You Plan On Being In The Last Days? In Your Homeland, Or Israel?

You may fall into one of these categories……..

1. Some Believers Will Leave Early For Another Country. Some believers will leave their home lands early. The United States is not the only place where bad times will hit. Many believe that Europe will fall first, and then shortly after that America’s dollar falls rapidly. We know war is coming to Israel, so it won’t be wise to head over now, but once war happens in the country, and she takes back land, Israel will be looking for people to occupy those new areas. These people who re-locate to another countries will be away from the disasters, but will be waiting for Israel to open up, or they may plan on staying in these new areas permanently. There are advantages and disadvantages to re-locating, and then re-locating once again. First, you have to set up a new home in a new country. This isn’t an easy task for anyone. You will still have to stock pile food, and prepare in that new location. I don’t know about you, but we depend on websites like Amazon to locate goods. Will it be the same in another country? You will not know your surroundings, and there might be culture shock, but at least you are far away from the challenging times associated with disasters in the United States. It might be expensive, and you may have to leave loved ones behind that think you are crazy for leaving. There are pros and cons with leaving early.

2. Believers Will Stay Put In Their Homeland For Now, But Leave Later In The Middle Of Chaos. Many people will wait in the US, or other areas around the globe where they have food stocked up, and extra beds to help family. Believers are going to be working together, sharing their food, and resources and waiting for after the war in Israel when her doors open up. There are advantages and disadvantages to staying put. One advantage is you know where and how to get supplies. You know your local area, and still have time to stock up, and warn people. You are able to gather people because you do feel comfortable reaching out to people in your home land. People may forefeit their homes and start bunking up with family to pay one mortgage payment. The internet is still widely available that these people may start gathering the people and meeting at several location points around their country, where they can enter into Israel as a community. On the other hand, there are so many prophetic forecasts of massive judgement coming to the United States, and we know Europe is Anti- Christ territory, so in many regards they may have to weather storms ahead. You may not be safe, and once disasters hit, food will become scarce. How will flights to Israel come about when most people cannot even feed themselves? Those are things worth thinking about.

3. Many Believers Will Stay In Their Homeland Countries. Many believers may bot be able to get out for one reason or another. Many prophets (believers) have seen open visions of large pockets of land or locations in the United States glowing from the sky. These might be refuge places for believers around the country who gather a large amount of believers together. These groups see great miracles and will be protected, like Ken Peters mentions. In his vision, he says these groups have their needs met, and food is provided for them miraculously. Many people have seen millions come to Christ through this period of destruction. In another vision, another believer saw this same thing, but from a different view point.  He saw believers trying to get to these refuge points, but sadly they they were taken advantage of along the way. They were easy targets for those around them, and had to make it to these locations on foot.

Ken Peters – I Saw The Tribulation (Cleaned Up Audio & Video)

A Couple Of Things To Keep In Mind:

God Isn’t Limited By Finances. I see in the future that many of us are going to help each other out. Finances will be provided where there is no way. Food will be multiplied. Believers are going to gather together for refuge. You won’t be alone in the end days. There will be a network of believers, and many of them will be willing to support another believer. God could create money where there is no way, and work in the hearts of many who have more in their bank accounts to provide for people who have nothing. Many people today are preparing food and supplies to help others out in the years to come. Start becoming one of those people who is stocking up.

God Could Allow People To Be Moved To Israel Through Translation- Many people have experienced translation, where they are in one geographical area, (one country ) and find themselves in another country, such as Bree Keyton, and David Herzog. Bree Keyton was driving her car, and an angel took over, and she found herself in a foreign country giving a message to a large group of people. After her message was given, she found herself back in her car, and thought it was an elaborate dream. Later, (a year later ??) , she went to this country, and people welcomed her back and reminded her of when she was last with them. They recalled the very event she experienced, and it was there that she learned that she was translated. David Herzog also experienced translation. He was in a foreign country and was due to speak at a church. He was running late in his car, and told the congregation he was late. They were willing to wait an hour or more for him to get there. He started praising the Lord in his car, and found he was just minutes from the church. God fast forwarded time and he arrived (45 minutes?) earlier than he expected.

Hunger And Concentration Camps Appear Worldwide, Not Just In America – These things are going to happen around the globe, not just in America alone. In Ken Peters vision, he says at some point towards in America’s future they will be hunting Christians down. The sheer hunger to get Christians will be overwhelming, which likely stems from those who have received the mark talked about in the bible. In his vision, he saw people take the mark, and after taking this holographic image, they appeared in a state of stupor, where they lost their ability to think for themselves. When famine hits and people are desperate for food AND water, UN troops will be seen on every street corner, and advertisements for these camps created the desire for a place to access food and water.  It was said these places were irresistible for those people who have been without food for weeks. People will flock to these camps, but before the food and water is given, they have to bow down to this new world order, in particular, this leader who is in charge. Some say his image is a holographic one, as he doesn’t appear in person. Once they do this, they are able to advance into the next room where there is food, water and a place to rest. The impression is this mark alters your mind, where you cannot decide for yourself any longer what you choose. The bible says once this mark is taken, you lose your salvation. The one encouraging message from this vision is they cannot force you to take this mark. They will inflict pain on you, but it is up to your will if you decide to take it. Peters also remarks how they use guillotines, and the process of killing people is speedy and quicker than anything he had seen.

(Note, Michael Snyder gives his articles away for free. If you wish to publish these in a newspaper, or a blog, you are free to do so, so long as there is a link back to the original article. Economic Collapse Archives, End Of The American Dream Archives, The Truth Archives)

Michael Snyder Is Coming To Texas, And What He Has To Say Will Shock America

Re-Locating Should You Move To Another Country To Escape The Collapse Of America? 10 Questions To Ask Yourself First

Re-Locating – Why Are So Many People Choosing To Leave The United States Permanently?

Re-Locating – 221 Percent Increase In One Year? Why Are So Many People Renouncing American Citizenship?

Re-Locating – What Is The Best Place To Live In America? Pros And Cons For All 50 States

Re-Locating –Why Most Of The Western Half Of The U.S. Is Completely Unsuitable For Strategic Relocation

Re-Locating – What Is The Best Country In The World For Americans To Relocate To In Order To Avoid The Coming Economic Collapse?

Re-Locating – The Best Place To Live In The United States? Here Are 9 Maps To Consider

Faith Food Storage For The Last Days –How Do I Prepare For Economic Collapse With No Money In The Bank?