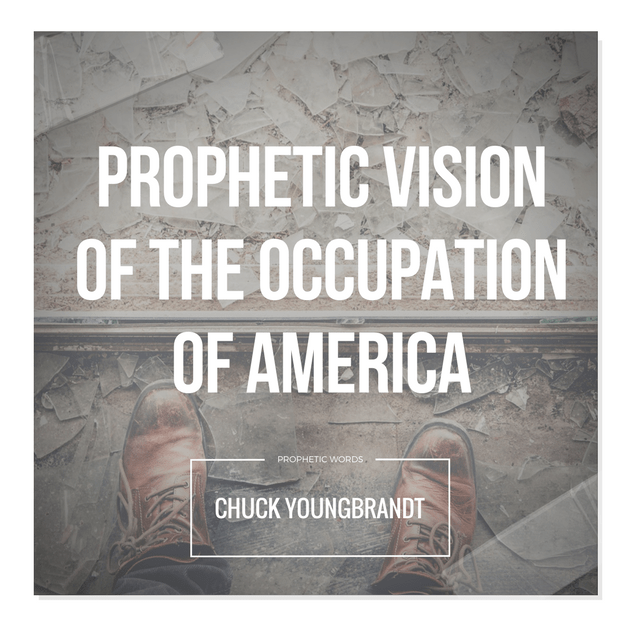 Chuck Youngbrandt was called to warn the Church in America of coming judgments.

As described in Revelation chapters 17 and 18, Judgment will come on Babylon the Great, and we believe it will commence very soon. We understand Babylon the Great to be America. The reasons for Judgment are given within those verses and are obvious to all with a sense of God’s point of view and His character. And, national moral error always has its national consequences. God judges nations while they are yet a nation.

Weatherwise the year will start with a very rainy spring. On June 9th it gets very hot and no rain with resulting crop failures. In October it will begin to be very very cold. There will be volcanic eruption on the west coast. A destructive hurricane will hit the New Orleans area in September, followed on the 19th by an earthquake in St. Louis. This hurricane, [Sept in New Orleans,] is a sign that in the following December an accidental Russian firing of a nuclear missile attack on America will occur. While the Russians try to stop them, 4 get through. They hit Lexington KY, Columbia SC, Richmond VA, and just north of New York City. The U.S. counter attacks and hits three Russian cities.

In this year North Korea will attack South Korea, China attacks Taiwan. War again in the Persian Gulf where we loose. The stock market will start its fall in July and will result in one half the people being out of work with great inflation and coupled with food shortages, starvation will start. From other prophets like Dan Bolher, terrorist attacks will become common. The destruction of trains, planes, school busses, power plants and on and on. With our economy reduced, fuel will be in short supply. Food riots will start in August, August will be a real turning point. Those who are rebellious against God will now rebel against the government including the communists fifth columnists we have here. Military troops will have to be called out as a result.

Some will repent but many will continue in rebellion. God said 90% of the rebellious and disobedient church people will die during this time. What sounds like germ warfare or at least a plague breaks out in California and Georgia killing thousands as it spreads, panic and fear will result. China and Japan buddy up closer in their economies, Japan out of fear, no doubt.

The second year, 2001, weatherwise there is the very cold winter, some places no snow and others to much, -46 degrees in Chicago. Eighty percent of the homes in America will be without heat and with little food many will starve to death. Dead bodies will lie in the streets. It will reach 120 degrees by mid May.

The year starts out in January with an earthquake in northern Iowa followed in February by another one in Boston and then they become very common throughout the year. In late spring God’s prophets will go across the land calling people to repentance, many will repent. Electrical power will be rationed, this may be the result of the strange and powerful ejecta from the sun which can destroy power grid hardware like it did in Quebec in 1989, that little one cost 10 million to repair. Oil imports are cut off. Very little food. Again half the people out of work. Mexico and Canada restrict how many Americans can cross over. Fear, pain, and misery for the unbelievers. Miracles for the Christians, food increased, dead raised. At this time persecution of Christians will go wild with government approval.

Next during the third year, in the summer, July 5th, a mighty, very powerful earthquake hits Chicago, it will be heard for 500 miles around, knock people off their feet in Detroit. The water in Lake Michigan will rush to the north and then return 15 stories high and totally destroy Chicago. The water will continue down the Mississippi river valley wiping out all the cities in its path including New Orleans. Thirty days later, angels will tell the Christians where to flee, and seven days after, an all out nuclear attack will hit America. At this time in Florida most of the southern half of the state from Orlando south will go under ocean water, be gone. The U.S. Military will have received a death blow, very little military left. Two months later is the invasion. Russian troops land at Slaughter Beach, Delaware, they move on into Philadelphia where no one is alive from 3 neutron bombs. They take over many air fields and land a million in personnel. China, Cuba, Mexico, Japan, Nicaragua, Serbia, and one other country join in the attack. On the west coast the Chinese land and enter through Mexico with Mexican help and up into California, they also land at San Francisco. They land in Astoria, Oregon with mainly Japanese personnel. In California the Chinese are ordered to kill all Americans. They dig great holes with earthmovers and bury people alive. This is stopped by a battle in San Francisco where the Chinese general who promoted “death to all” was killed. Alaska was taken by the Russians and they killed everyone there. Hawaii surrendered to the Japanese. The Russians will take some Americans back to Russia for slave labor. Russia and China will plunder the land. Chuck saw busts of Karl Marx set up in churches and people worshiped him. As the seven years go by, children are sold for food. Chuck said at this time you could buy a child for a pack of cigarettes. Witches and homosexuals will hunt Christians for food, cannibalism! Near the end of this occupation Americans were put on trains, told they were going to re-education camps, and taken to slaughter houses where they were processed for food, again the satanic groups wish to kill millions of people. This is when the anointed Leader of the Land, by God’s power, drives the invaders out. When this starts happening the “enemy” Christian soldiers that are here join with the Americans driving the others out. All totaled 70% of Americans will have died.

Store food? YES! Shoot at the enemy when they come, one against the many? NO! Look to God always. Do not fear the enemy, fear God, Rev 14:7.

Jesus, why are you telling me this, Chuck asked. “That my children should prepare their hearts for these things and believe on me, for I am able to supply all your needs in every adversity. That you walk in faith and not fear. That you stand upon my promises and see them. That you abide in my love and know that I am the Lord thy God.”

“I then saw churches, great and small, closing their doors all over America” A Prophetic Dream Given To Larry Grecu