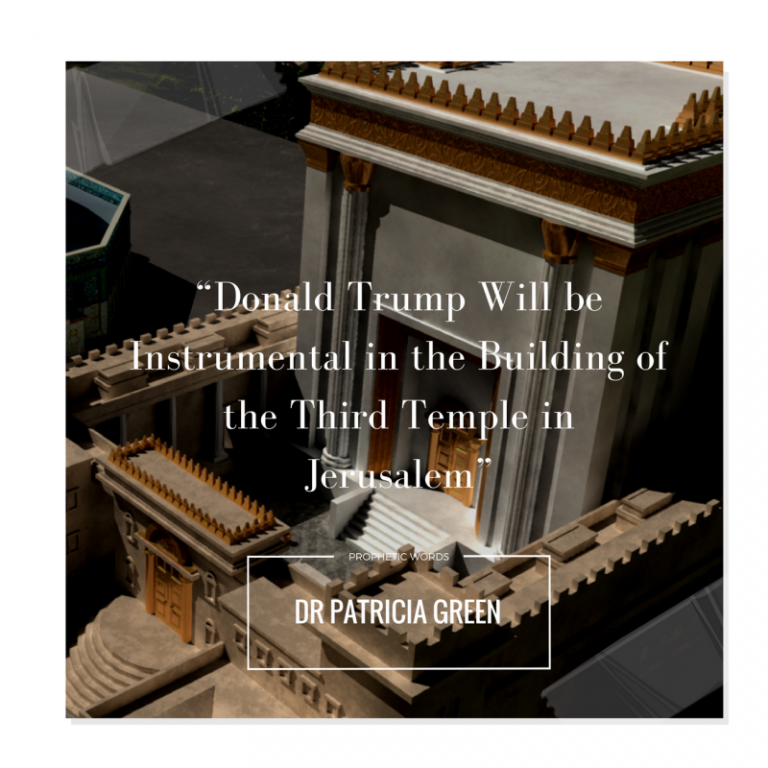 January 23, 2017
Z3news.com
In the second half of the video shown below, which was published yesterday on YouTube, Dr. Patricia Green shared how God showed her Donald Trump’s role in the construction of the third temple in Jerusalem. Patricia Green is founder of Joy Ministries Worldwide.

The following provides a transcript of her comments:

“On November 9 2016, which is the same day Donald Trump was declared the winner of the election, the Lord gave me 1 Kings 5:5 in a dream three times.

Behold, I intend to build a house for the name of the Lord my God, as the Lord spoke to David my father, saying, ‘Your son, whom I will set on your throne in your place, he will build the house for My name.’ (1 Kings 5:5)

The next day on November 10 2016, I was worshiping the Lord with all my heart. I was praying in tongues and a spirit of intercession came on me so strong. As I was praying in tongues, I was weeping. After I finished praying, Holy Spirit said to me, “I want you to go outside to your altar. I want to reveal to you about the scripture in 1 Kings 5:5.”

So, I went outside and stood by my altar and the Lord said, ‘Trump is my Cyrus. He will help rebuild Jerusalem after it has been attacked. There will be a war very soon and Jerusalem will be attacked. Many will be in mourning, but the mourning will be short lived. I will restore Jerusalem. Solomon built my temple as I directed through my servant David. There will be a third temple. It is decreed in holy scriptures. My Cyrus, Donald Trump, will be instrumental in the building of the third temple in Jerusalem. Many will declare Trump is evil for doing this, but I have chosen him for this. Hold this prophecy until I instruct you to release it.’

Then on January 18 2017, I was awakened in the middle of the night with this message from the Lord. He said, “I have a message for the Israelis. War is coming soon. Very soon.”

From the message the Lord gave me, it appears this war will be short lived. We need to pray the casualties from this war will be minimal. We need to ask Yahweh to supernaturally intervene in this war so these Islamic nations that are going to war against Israel will know Yahweh is the one true God. We need to pray against these Islamic nations that are conspiring to war against Israel the same way David prayed in Psalm 83.”

The good news is God told her the time of mourning would be short lived because He plans to restore Jerusalem, which includes the construction of a third temple. The Lord told her it is decreed in the holy scriptures. A few of those scriptures are shown below.

She was told Donald Trump will be instrumental in building the temple. Other people have received dreams and visions showing President Obama will also play an important role in that process, which I documented in a previous post. I believe both Trump and Obama will have important roles to play in this process, which will likely take several years to complete due to the delayed start date and large scope of the project.

13 O my God, make them like the whirling dust, like chaff before the wind.
14 Like fire that burns the forest and like a flame that sets the mountains on fire,
15 So pursue them with Your tempest and terrify them with Your storm.
16 Fill their faces with dishonor, that they may seek Your name, O Lord.
17 Let them be ashamed and dismayed forever, and let them be humiliated and perish,
18 That they may know that You alone, whose name is Yahweh, are the Most High over all the earth. (Psalm 83:13-18)

3 Let no one in any way deceive you, for it will not come unless the apostasy comes first, and the man of lawlessness is revealed, the son of destruction,
4 who opposes and exalts himself above every so-called god or object of worship, so that he takes his seat in the temple of God, displaying himself as being God. (2 Thessalonians 2:3-4)

1 Then there was given me a measuring rod like a staff; and someone said, “Get up and measure the temple of God and the altar, and those who worship in it.
2 Leave out the court which is outside the temple and do not measure it, for it has been given to the nations; and they will tread under foot the holy city for forty-two months. (Revelation 11:1-2)

© 2017, Z3 News. All rights reserved. This content may be freely reproduced in full or in part online, email, or other digital formats but only with full attribution to the author, a clickable link to http://Z3news.com, and no changes to the title or body of the article. For permission to reproduce this content in other media formats please contact us.