On Wednesday, I was contacted by someone on an ISIS kill list.  Of course there are probably lots of people out there that believe that “ISIS is after them”, but this particular individual and his wife were actually told that they are on an ISIS kill list by the FBI.  Not only are they on the list, but so is their pastor.  It turns out that ISIS has apparently been pulling names off of church directories on the Internet, and so now an entire church has ended up on an ISIS kill list.  In the past perhaps many of us would have been less alarmed by this, but the attacks in Orlando, Dallas, Nice, and Baton Rouge are all still fresh in our minds.  Innocent people are being targeted and killed just to make a statement, and nobody knows who will be next.

I would like to share with you a short excerpt from the email that was sent to me.  Names and locations have been removed to protect the identity of the individual and his church…

Enjoy reading your blogs. Need help. Or info. Please comment if you have info.

My wife and I live in *****, ********** just north of ******* We were contacted by the FBI this week. We are on a ISIS terrorist kill list and they wanted to inform us. So is my pastor. It appears a Muslim group is trolling the internet and getting church directories and posting names for anyone to kill. Quite frightening. I have talked to the ***** *** FBI Office numerous times now and they say they do not have suspects but this appears to be a new tactic. Be diligent but go about you normal life. They advised that the threat could be low – but tell that to the widows of all the slain police officers nationwide.

This was news to me, so I didn’t really have any additional information for this individual.  But if something similar has happened to you or someone you know, please let me know so that I can share it with him.  Obviously the federal government is trying to keep this quiet, and so we will have to rely on each other for information.

The Islamic State’s release on July 3rd of a new “kill list” prompted U.S. Department of Homeland Security officials to brief American Jewish leaders on the possible threat of terrorism to prominent Jewish figures and synagogues. The latest ISIS statement is not the first “ISIS kill list” to target American citizens. News of one broke in early June on the site Vocativ, which reported on a list published online which targeted over 8,000 Americans – including Hollywood celebrities and Silicon Valley executives.

Overall, approximately 15,000 Americans are now on various “kill lists” that ISIS has put out, but unfortunately most of the people on the kill lists aren’t even aware that this has happened…

Over the past few years the Islamic State has posted the names of some 15,000 American citizens from places such as New York, Texas, Florida and California on kill lists.

Yet the FBI has not neccessarily notified those on these kill lists that they have been marked for death, according to Circa News.

The lists are not publicly available, but Circa News was able to obtain samples. Out of 24 people on kill lists they contacted in Texas, 22 of them did not know that they were on such a list.

What we do know is that Islamic terrorists, whether they belong to ISIS or not, are not afraid to target innocent people in western Europe and the United States.  The attacks in Orlando and Nice made headlines all over the globe, and it seems quite likely that other radicalized Muslims will be emboldened by them.

And churches need to start taking security a lot more seriously.  Not too long ago, a 21-year-old Islamic radical had purchased a gun and had planned to go into a Detroit megachurch and start shooting on a Sunday morning.  The following is an extended excerpt from one of my previous articles…

21-year-old Khalil Abu-Rayyan of Dearborn Heights, Michigan actually admitted to authorities that he had purchased a gun and had intended to take it into a church that can seat up to 6,000 people on a Sunday morning and start shooting.

Abu-Rayyan also admitted to authorities that since he could not do his jihad in the Middle East, that he intended to “do my jihad over here”.  The following is an excerpt from a news report about this potential attack that was thwarted…

“I tried to shoot up a church one day,” Abu-Rayyan is quoted as saying in court records. “I don’t know the name of it, but it’s close to my job. It’s one of the biggest ones in Detroit. Ya, I had it planned out. I bought a bunch of bullets. I practiced a lot with it. I practiced reloading and unloading. But my dad searched my car one day, and he found everything. He found the gun and the bullets and a mask I was going to wear.”

Investigators didn’t name the church Abu-Rayyan allegedly eyed, but claim the property covers about two blocks less than half a mile from his work and can accommodate up to 6,000 members. He allegedly purchased a gun and told an undercover FBI employee that attacking a church would be “easy.”

“A lot of people go there. Plus people are not allowed to carry guns in church,” the affidavit quotes him as saying. “Plus it would make the news. Everybody would’ve heard. Honestly I regret not doing it. (If I) can’t go do jihad at the Middle East, I would do my jihad over here.”

The people that attend that particular church in Detroit should be extremely thankful that the authorities stopped that plot in advance, because the carnage would have been off the charts.

But without a doubt, there will be more terrorists that specifically target churches.  This is already happening all over the globe, and it is coming to the western world too.

Ronda Gaudette My mom had a vision when she was 10 (she’s now 78) and the Lord showed her this……ISIS (had no idea who they were 68 years ago) came into a church and pointed guns and HE said…………..” DO NOT DENY JESUS IS YOUR SAVIOR and DO NOT DENY JESUS IS THE SON OF GOD”……………remember these WORDS from the MOST HIGH because this caption is my mom’s vision being fulfilled 68 years later 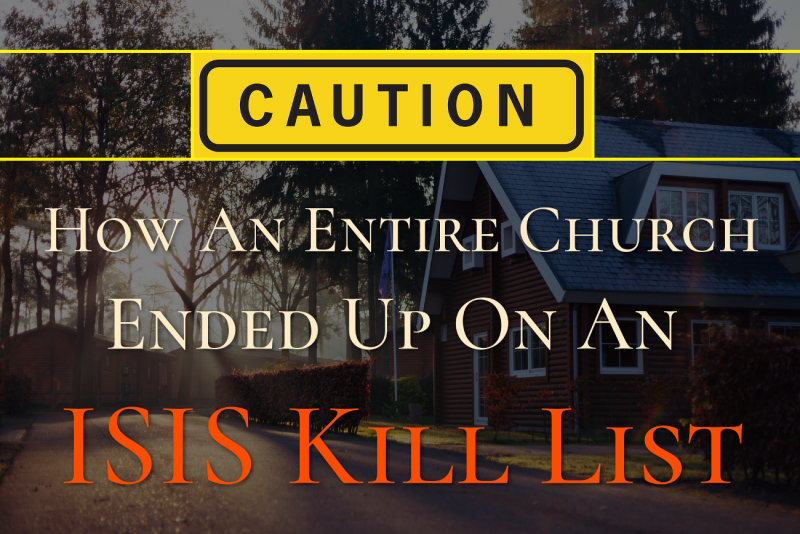