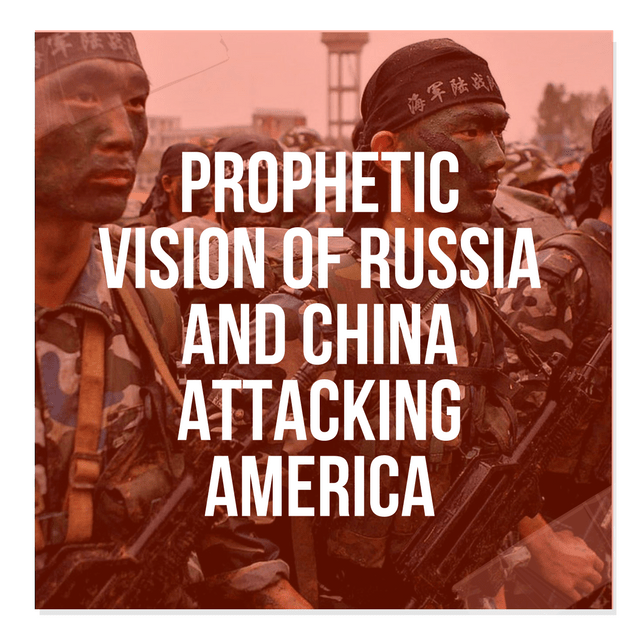 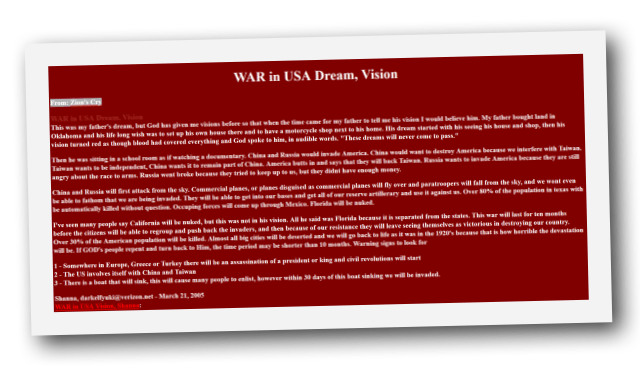 (This is re-published from a site where I have no names of whose dream this is, or their background. Please take it only at face value)

This was my father’s dream, but God has given me visions before so that when the time came for my father to tell me his vision I would believe him. My father bought land in Oklahoma and his life long wish was to set up his own house there and to have a motorcycle shop next to his home. His dream started with his seeing his house and shop, then his vision turned red as though blood had covered everything and God spoke to him, in audible words. “These dreams will never come to pass.”

Then he was sitting in a school room as if watching a documentary. China and Russia would invade America. China would want to destroy America because we interfere with Taiwan. Taiwan wants to be independent, China wants it to remain part of China. America butts in and says that they will back Taiwan. Russia wants to invade America because they are still angry about the race to arms. Russia went broke because they tried to keep up to us, but they didnt have enough money.

China and Russia will first attack from the sky. Commercial planes, or planes disguised as commercial planes will fly over and paratroopers will fall from the sky, and we wont even be able to fathom that we are being invaded. They will be able to get into our bases and get all of our reserve artillery and use it against us. Over 80% of the population in Texas with be automatically killed without question. Occupying forces will come up through Mexico. Florida will be nuked.

I’ve seen many people say California will be nuked, but this was not in his vision. All he said was Florida because it is separated from the states. This war will last for ten months before the citizens will be able to regroup and push back the invaders, and then because of our resistance they will leave seeing themselves as victorious in destroying our country. Over 30% of the American population will be killed. Almost all big cities will be deserted and we will go back to life as it was in the 1920’s because that is how horrible the devastation will be. If GOD’s people repent and turn back to Him, the time period may be shorter than 10 months. Warning signs to look for

1 – Somewhere in Europe, Greece or Turkey there will be an assassination of a president or king and civil revolutions will start
2 – The US involves itself with China and Taiwan
3 – There is a boat that will sink, this will cause many people to enlist, however within 30 days of this boat sinking we will be invaded.

ZC – Some say a 7 year war. Some say 75% of American people will die. Some say this will begin this year, in 2005 – before October 3. We can pick up clues in prophetic dreams and visions, but must never take them as exact. Prophet Duduman saw California burn. It could burn from earthquakes and volcanoes as easily as from a nuke. The ‘boat’ that sinks is most likely an aircraft carrier – from a missile by North Korea or Iran. Unfortunately this vision makes a lot of sense.