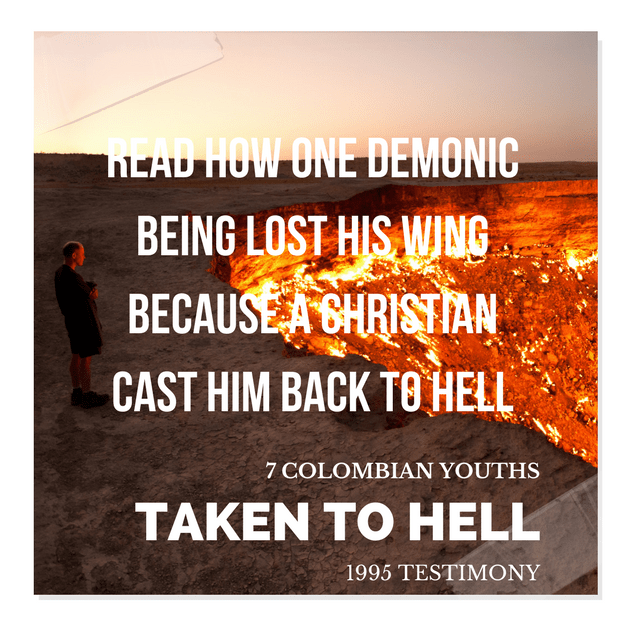 “For the wages of sin is death, but the gift of God is eternal life in Christ Jesus our Lord”

When we went down there, I felt the pain and experience of being dead.  I was very frightened by what I saw.  I realized there were many, many people there; all were shouting and crying out.  It was total darkness, but with the presence of the Lord, the darkness disappeared.  We saw thousands and thousands of souls all crying out for help and mercy.  They cried out to the Lord to take them out of that place.

We also felt great pain because we knew the Lord suffered tremendously whenever He saw them.

Many cried out to the Lord to take them out just for a minute, just for a second.  The Lord would ask them, “Why do you want to go out?“, and they would answer, “Because I want to be saved!  I want to repent and be saved!”  However, it was too late for them.

We went down further.  I saw that the floor we were walking on was being destroyed by fire; mud and flames were coming out of it.  There was also a terrible smell everywhere.  We felt so upset and nauseous from the smell and the shouts of all the people.

We saw a man, far away, who was waist deep in burning mud.  Whenever he took out his arms, the flesh from his bones would fall off, into the mud.  We could see a grey mist inside his skeleton, so we asked the Lord what it was.  This type of mist was in every person in hell.

The Lord told us it was their souls trapped inside of a sin body; like it is written in Revelation 14:11

“And the smoke of their torment goes up forever and ever; they have no rest day and night, those who worship the beast and his image, and whoever receives the mark of his name.”

We began to understand many things that we had been ignoring on Earth; most importantly, the clearest message was that our lives on Earth determine where we spend eternity.

As we walked hand in hand with the Lord, we realized the Hell had many different places with various levels of torment.  We came to a place with many cells which contained tormented souls.  The souls were being tormented by many types of demons.  The demons would curse the souls, saying, “You cursed wretch, praise Satan!  Serve him like you did when you were on Earth!”  The souls suffered terribly from the worms; and the fire was like an acid over all their body.

We saw two men inside one prison cell, each had daggers in their hands and were stabbing each other.  They would say to each other,

“You cursed wretch!  It’s because of you that I’m here!  You made me come here because you blinded me to the truth and didn’t let me recognize the Lord!  You didn’t let me receive Him!  Many times I had the chance and you didn’t let me accept Him!  That is why I’m here, tormented day and night!”

Through a vision, the Lord showed us their lives on Earth.  We saw them in a bar together.  An argument started which lead to a fight.  They were already drunk.  One of them took a broken bottle and the other pulled out a knife.  They fought until each one was mortally wounded and died.  The two men were doomed to repeat that scenario forever.  They were also tormented by the memory that they had been best friends on the Earth, like brothers in their love for each other.

As we continued walking and we saw a woman inside another cell, she was rolling over in the mud.  Her hair was all messed up and full of mud.  Inside the same cell was a big and fat snake.  It move close to her, surrounded her body, and went inside of her starting with her lower parts.

She was forced to have sexual contact with that snake.  In that place all the men and women that lived in fornication were forced to repeat it there.

However, they had to do it with snakes covered with 6 inch spikes.  The snake destroyed her body every time it went inside of her.  She cried out to the Lord and asked Him to stop it.  She did not want to suffer any more. “Make it stop!  I won’t do it again!  Please!  Make it stop!” she begged the Lord as the snake came inside and destroyed her body over and over again.

We tried to cover our ears to her cries but we could still hear her.  We tried even harder to cover our ears, but that didn’t help.  We said the Lord, “Please Lord we don’t want to see and hear to this anymore!  please!”

The Lord said, “It is necessary that you see this, so you can tell the rest, because my people are being destroyed, my people are ignoring the true salvation, the true road to the salvation.”

We continued walking and we saw a giant lake with thousand and thousands of people in the midst of flames.  They waved their hands asking for help, but there were many demons flying over that place.  These demons used spears with S-curved spearheads to hurt all the people burning in that lake.

The demons mocked and cursed them saying, “You cursed wretch!  Now you must worship Satan!  Praise him, praise him as you did when you were on the Earth!”  There were thousands and thousands of people.  We were so scared, we felt that if we did not hold the Lord’s hand we would be left in that horrifying place.  We were terrified from the things we were feeling.

In the distance we saw a man standing up, who was very great pain and agony.  He had two demons flying over him, tormenting him.  They would dig their spears inside his body and take out his ribs.  They also made fun of him all the time.  Even further, the Lord showed me that he was tormented from always worrying about the family he had left on the Earth.  The man didn’t want his family to arrive in the same place of torment.  He was worried because he never gave them the message of salvation.

He was tormented because he remembered that they once had the chance to receive this message.  He was a very important person to give this message to his family, but he preferred to ignore it, and now he was worried about his sons and his wife.

The torment continued as the demons cut off his arms, he fell into the burning mud.  Because of the pain from the burning mud, he wiggled like a worm from one place to another.  His flesh fell from his bones because of the heat.  He then started to slither like a snake, trying to get out of there.  But every time he tried to go, the demons pushed him back and he went deeper inside the mud.

We then saw a number of demons in one place.  Something caught my attention, I noticed that one of the demons was missing a wing.

I asked the Lord, “Lord, why is this demon missing one wing?”  The Lord said, “That demon was sent up to the Earth with one purpose, but he did not accomplish his task, and he was cast back to Hell by one of the servants of God.  Then Satan came and punished him, and cut off one of his wings.”

Then we understood that as Christians, we have all authority and power in the Name of Jesus to cast out all demons and principalities.

Dear friends that are listening these words right now, this testimony is not for condemnation but salvation; so you can test yourself and see the condition of your heart before the Lord.

This is so that you can change your ways, for salvation and not for condemnation.  Right now, lift your heart before the Lord and confess your sins, so if the Lord came at this moment you could go with Him instead of going to that place of torment where there is crying and gnashing of teeth.

There, you will really understand why Jesus paid such a high price at Calvary’s cross.

We saw many people in Hell who were ignorant of why they were there. Their lives were full of activities that they didn’t think were sins.  Dear friend, test yourself!  Do not think that lying, stealing, being vain are okay things to do!

These are all sin before the eyes of the Lord!  Dear brothers, turn away and stop doing these things!  I’m giving you this message so you can stop willfully sinning, and look even more to the face of the Lord.