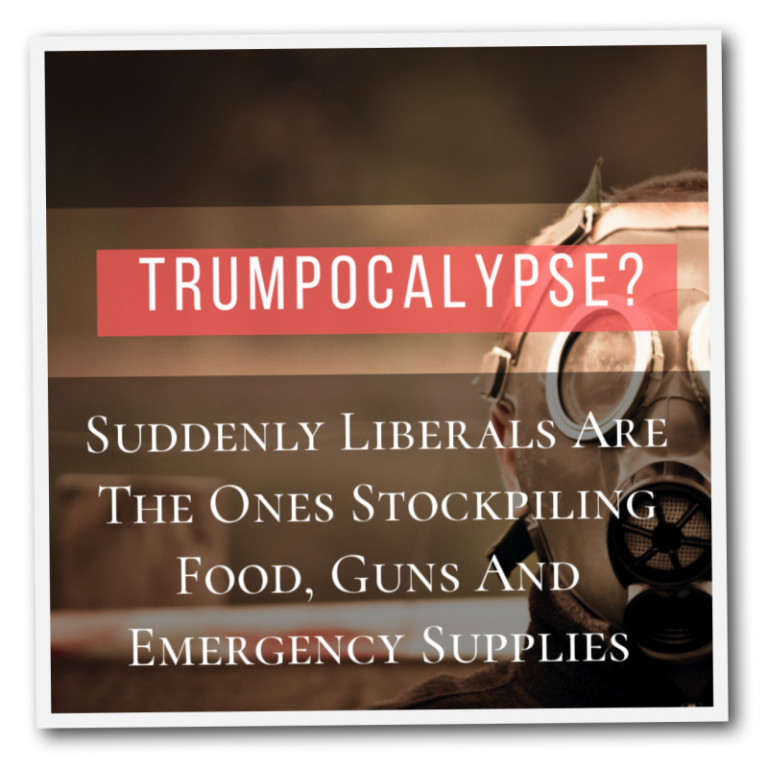 Now that the shoe is on the other foot, many liberals all over America have suddenly become extremely interested in prepping. Fearing that a Trump presidency could rapidly evolve into a “Trumpocalypse”, a significant number of leftists are now stockpiling food, guns and emergency supplies. In fact, even though many had expected a sharp drop in gun sales following Trump’s victory, what actually happened is that fear of what is coming under Trump pushed background checks for gun sales to an all-time record high on Black Friday. The election of Donald Trump has awakened the left to a degree that we haven’t seen in decades, and some on the left are embracing hardcore survivalism without any apologies.

What is ironic about all of this is that on the other end of the political spectrum interest in prepping is probably the lowest that it has ever been in the history of the modern prepper movement. A couple of weeks ago, I wrote an article about how it was like “a nuclear bomb went off in the prepping community“, and nothing has changed since that time.

In fact, since I originally wrote that article we have gotten some hard numbers that show how dramatically optimism about the future has surged among those on the right.

Just before the election, CNBC’s All-America Economic Survey found that only 15 percent of all Republicans believed that the economy would improve over the next year, but after the election that number skyrocketed all the way up to 74 percent.

But among Democrats it is a different story altogether. That same CNBC survey found that optimism about the economy on the left fell by more than half after the election. At this point, it is sitting at just 16 percent.

It would be hard to overstate how negatively many on the left feel about Trump. We have seen many of them take to the streets to angrily protest his election, and according to the BBC others have decided to stockpile food and guns “in preparation for social and economic collapse”…

In America, stockpiling weapons and food, in preparation for social and economic collapse, has tended to be the preserve of right-wing libertarians and foes of “big government”. But the Liberal Prepper Facebook group – up to now a small band – reports a big increase in enquiries.

“A lot of people are worried that not only will [a Trump presidency] fail but that it will fail spectacularly to the point that we are going to end up on in one or more critical situations that we are just not prepared for,” says Jeff, 36, one of the group’s members.

So could we see “social and economic collapse” under Trump?

Despite the wild optimism that we are seeing on the right at the moment, without a doubt this is a possibility.

It is funny how a single election can change our perspective on things so dramatically. During the Obama years, it seemed like the left was constantly talking about disarming everyone, but now Trump has sparked a renewed interest in gun ownership among many liberals. Prominent progressive author Ana Marie Cox is just one example…

Witness Ana Marie Cox, a popular progressive writer with gigs at MTV and the New York Times. “So who else has been researching basic disaster prep stuff?” she polled her Twitter audience on Wednesday. “Bc—congrats, right wingers—I do not trust the government to help anymore!” Her next tweet extended the holiday merriment to our nation’s Second Amendment enthusiasts: “Getting my rifle out of storage this week.”

And did you know that leftists even have their own gun organization?

It is known as “the Liberal Gun Club”, and since Trump’s victory it has experienced a huge surge in membership…

Lara Smith, national spokesperson for the Liberal Gun Club, says her organization has seen a “huge” rise in enquiries since November’s election and a 10% increase in paid members.

The election of Donald Trump, who was backed by the National Rifle Association early on, was thought to bring an end to panic buying. Shares in gun manufacturers even dropped by as much as 18% following his victory.

Instead, FBI background checks for gun transactions soared to a new record for a single day – 185,713 – during the Black Friday sales on 25 November, according to gun control news site The Trace.

Many on the right have responded to Donald Trump’s election victory by deciding that the battle is over and that it is time to go to sleep. But many on the left have been suddenly awakened and are now preparing for extremely challenging times ahead.

I hate to say this, but in this case those on the left that are busily preparing are showing much more wisdom than many on the right that have chosen to abandon prepping altogether at this point.

Of course most of those on the left don’t really understand the storm that is approaching. All they know is that Trump is “really bad” and therefore they need to try to get through the next four years the best that they can. Here is more from the BBC…

“We are not looking for end of the world Mad Max-type scenarios, we are not looking at a zombie apocalypse,” says the author of a left wing survivalist blog, who also reports a surge in interest since Trump’s victory.

He says it is “fairly easy to predict” an economic collapse under Trump but adds: “No matter what, the country is still going to be here in four years, there’s going to be another election.”

I would have to agree that a major economic downturn is quite likely in the very near future. We have been on the greatest debt binge in history during the Obama years, and it is inevitable that this bubble will burst.

No matter who won the election, we were going to have to deal with the consequences of decades of incredibly foolish decisions sooner or later.

Let us certainly hope for the best, but without a doubt those that are preparing for challenging times ahead are showing incredible wisdom, and this includes both liberals and conservatives.