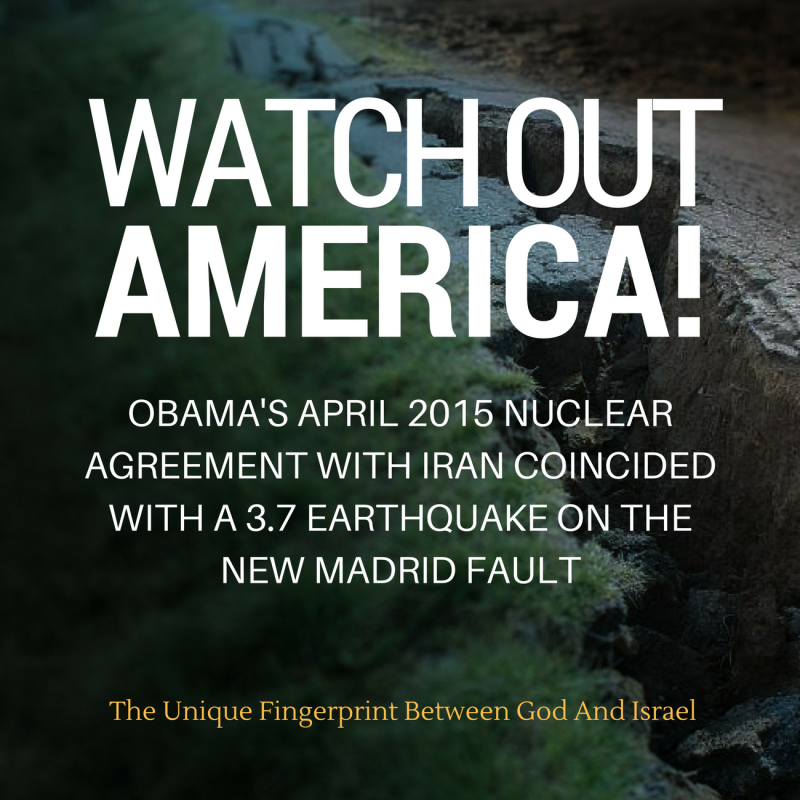 In this interview which appeared on the Jim Bakker show Apr 21, 2015, Zachary Drew uncovers an incredible find in which an earthquake that took place on the New Madrid Fault zone area and how God used that earthquake as a message to steer clear of betraying Israel.

Zachary Drew explained that God has historically used the the New Madrid area as a warning to not touch Israel. Again the area rumbled as a nuclear framework was being put together by Obama which would threaten Israel.

With the division of the land underway, you cannot help but to wonder what is going to be happening in America, when that formal divide takes place.  Most certainly we may just see a number of horrific earthquakes take place.

I encourage you to watch the 5 minute video with Zack Drew and Pastor Jim Bakker discussing this significant event that almost everyone missed.

If you have eyes to see the judgement pattern, it could very well be the same pattern coming for America in the days ahead.

When President Obama announced a “framework” nuclear agreement with Iran – which Israeli Prime Minister Benjamin Netanyahu warns threatens the very existence of his nation – few noticed the significance of the date.

On the Jewish calendar this year, April 1 coincided with Nisan 13, the date in history when a Persian king signed an agreement calling for the destruction of the Jews.

“King Obama has issued his decree putting the Jewish nation at risk of annihilation on the very same day that King Ahasuerus’ scribes came together and issued their statement to the rulers of every people of every province according to the writing thereof, and to every people after their language and sent letters by posts into all the king’s provinces, to destroy, to kill, and to cause to perish, all Jews, both young and old, little children and women, in one day.”

The ominous historical reference comes from Mark Biltz, pastor of El-Shaddai Ministries in Bonney Lake, Washington, and author of “The Feasts of the Lord,” “Blood Moons” and “Studies in our Hebrew Roots.”

The book of Esther declares, in Esther 3:12, 13, that on Nisan 13 the Persian king Ahasuerus was tricked by a viceroy by the name of Haman into signing an agreement to destroy all the Jews in the land at a future date.

Joel Richardson, author of “End Times Eyewitness,” “When a Jew Rules the World,” “The Islamic AntiChrist,” “Mideast Beast” and more, said it might be a message from God.

“The God of Heaven and Earth frequently orchestrates world events in such a way as to demonstrate His perspective,” Richardson explained. “Those who are quick to brush aside the correspondence of profound global events, particularly as they affect the state of Israel, with important biblical dates often miss what may very well be purposeful thunderclaps from heaven”

“Shortly before 11pm local time Wednesday night, an earthquake occurred along the New Madrid Fault Zone in far southeastern Missouri. The epicenter of the quake was near Steele, Missouri. Nearby cities include Blytheville, Arkansas and Hayti-Caruthersville, Missouri. The USGS reports it as a magnitude 4.0, occurring about 11 miles below the surface of the Earth.” Find that news report here

Repeating History Gives Us A Glance At Possible Future Events

Another spectacular find was the timing of this Iran deal.  Was the timing calculated by the Obama team, or did it happen to be orchestrated by God?

The date fell on April 1, 2015 which coincided with Nisan 13, the date in history when a Persian king signed an agreement calling for the destruction of the Jews.

One of the signature of God is His ability to allow mans free will to take place….but at the same time show His omnipresence in the situation.

Events in the past seem to be repeated in history.

Take for example the desecration of the temple at the time of the Maccabees is significant because some day we will see this event repeat itself again in the future with the Anti-Christ  (Dan 9:27; 11:31, Matthew 24:15, )   In this video with Jonathan Cahn these events of the past seem to show an almost identical future date in history.

Jonathan was famous for uncovering an identical event in our present time, connected to an event in the past. Obama’s words from his first State of the Union message in January 2009 matched up almost perfectly with an ancient vow that brought judgment to ancient Israel. ‘The bricks have fallen, but we will rebuild with hewn stone,’”
The Destruction Of Sodom And Gomorrah AT The Feast Of Unleavened Bread
Nisan 13 and Nisan 14 seem to be significant dates to keep your eyes upon.
Today in my bible reading I happened to be reading the Genesis 19 account of Sodom and Gomorrah.
Here we have an account where God judged Sodom and Gomorrah.  In the account, the two angels are sent to a city whose sins were so tremendous God finally pronounced a sentence of destruction upon them.
Lot and his family were the only righteous ones left in the city.  The angels told Lot to gather up his family because they had to leave the city.
What I find quite interesting is something that I have seen today.
Prophets have uncovered to us the areas of this country which God is unhappy with.  It seems like the west coast, in particular California, and the east coast, in particular New York city, and often times I hear areas in Florida in prophetic words.  Believers in those areas who hear the call of the Lord don’t seem concerned about leaving.
Lots two daughters in the account were engaged to two men who were told about the coming destruction and they reacted in disbelief.  Its hard to tell from the scripture if it was unbelief, or mocking, or laughing at the idea of judgement.
Today I encounter that same very thing.  The two angels told Lot to gather up his family.  That included these two sons in-law.  They could have been spared if they listened, but they chose to shrug their shoulders.
Today I encounter many Christians who need 4 or 5 words from the Lord before they move, but sadly what is going to happen, just like these engaged men, is they are going to be caught up in the destruction.  They choose not to listen.
(Granted it does take a lot to move, and I count myself in this group of people to some degree.  )
Sadly they were left behind and destroyed with the rest of the city.
We see that judgement came down at the time of Unleavened Bread which fits a pattern we see in scripture.

Genesis 19:3″And he pressed upon them greatly; and they turned in unto him, and entered into his house; and he made them a feast, and did bake unleavened bread, and they did eat.”

The Pattern I see…
1.  The season of Passover/ Unleavened Bread,– Remember Exodus and the plagues?  We are looking at the same time of judgement.
2.  A calling of Gods people to escape in advance….  God tells His people in advance of what is to happen.  Destruction doesn’t come without Gods prophets first knowing about it.
3.  A deliverance of those people who hear the call of God and leave. – In the account the family could escape to the mountains, or a city which they chose.  In both instances a group of people were able to escape while the judgement was poured down on the people.

I have been watching Leslie Johnson’s word that was given to her about an OMER ushering in a Palestinian state.
You can read all about it at this link:  “Omer to usher in a Palestinian state” Prophetic Dreams Given To Leslie Johnson
Another friend of mine Rebecca N Barnes discovered that OMER is also a city located about 2 hours and 40 minutes away from France.
France has been leading the way by hosting the negotiations for the international community to come together for a plan to divide the land of Israel.  What we could seer again is the actual agreement takes place in France, and maybe the official signing is in the city of Omer.  I am speculating.

Kara Pickering who searches the bible codes also has found a remarkable cluster of codes that pertain to the dividing of the land.  She found a pile of words all grouped together in the codes which talk about the coming land divide. Obama is listed within this cluster and so is the word comet.  She also found the word “Omer, France”. Right now, Obama IS involved in dividing of the land, so his name has every right to be in those codes.  You have to wonder if some of the other leaders of those nations which are involved are also listed?   So here we could be seeing the fulfillment of Leslie Johnson’s prophecy.

Along with the word about “Omer Ushers in Palestinian State”, Leslie Johnson heard  “Catastrophe Hits America” and  “Chaos Reigns As Americans Protest Help to Israel”

This works perfectly with other words about Israel facing war.

Back to this unique connection with the Iran Nuclear arrangement. That date of Nisan 13 was the very date in history when a Persian king signed an agreement calling for the destruction of the Jews.

Could we see that destruction being called again?

Counting of the Omer (Hebrew: ספירת העומר‎‎, Sefirat HaOmer, sometimes abbreviated as Sefira or the Omer) is an important verbal counting of each of the forty-nine days between the Jewish holidays of Passover and Shavuot as stated in the Hebrew Bible: Leviticus 23:15–16.

The Omer starts this year on Tuesday April 11th.

What she heard was headlines, similar to what you would read in a newspaper after the event takes place.

I find both scenarios quite interesting to watch for because both events could fit with what she heard.

Keep your eye out for this scenario also to be significant this year.  There seems to be a lot of similarities between past events and what could take place in our time around the same significant dates.

New Madrid seems to be the location that God has HIS hand on when this all takes place.

“We believe that the United States and the world, have now entered the most dangerous time for earthquakes and volcanic eruptions of catastrophic spans over 200 years …. It would be unwise especially to ignore the history of major earthquakes in the seismic fault zone New Madrid and the fact that at the end of a solar hibernation for 600 years, this region has experienced devastation by earthquakes of M6.8 to M8.0 up. “ 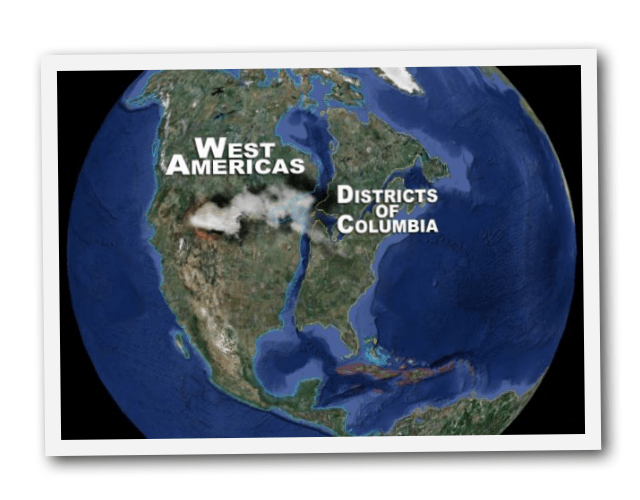 The Possible Future Maps Based On New Madrid Fault Zone.