We are coming up on a season of spiritual iniquity. In the next eleven days there are two major Satanic and/or Wiccan holidays we want you to know about. Intercessors will note the increase in spiritual warfare during the upcoming weeks. Also, those who are satanic cult survivors may need extra prayer and counsel during these approaching dark holidays. Parents and those with spiritual authority need to take extra precautions to pray for and protect their children, congregations and pets (especially dogs) during this season.

July 23 – Sothis Day: Specific to Crowleyean (as in Aleister Crowley) and Setian cults. Crowley was a leading black magician of the 20th century. His followers in the OTO (Ordo Templi Orientis) revere the ancient Egyptian version of haSatan, known as the dog-headed el (false g-d) Set.

This satanic/occultic ritual date is celebrated by Satanists (and many other Satanic groups such as the temple of Set as well as many Wiccans), when the large star, Sirius (or Sothis) which is sacred to Set is at its highest point in the Egyptian sky. It is a time of ill omen, and the hottest season in the Nile River Valley. The source for most of Egypt’s water for agriculture, the Nile is at its lowest ebb during this time of fierce heat. It is Biblically known as “…the destruction that wasteth at noonday.” –Ps. 91:6

In the West we refer to the brutal heat of late July through early August as the Dog Days. During this time, satanists and other groups make animal sacrifices. Dogs, particularly German Shepherds, are often taken and slaughtered. Pet owners beware.

July 31-August 1 Lammas or Lughnasadh: A well-known occultic and satanic holiday/feast traditionally celebrated both in Britain and Ireland by pagans, both so-called “white witches” and Satanists. Many law enforcement agencies are aware of these dates because of animal and sometimes human sacrifices. These rituals were brought to the USA in the fifties during the pagan revival (see Wicca: Satan’s Little White Lie at http://www.withoneaccord.org/Witchcraft-Vampirism-Satanism_c_7.html.

Among Wiccans, this is the chosen time for hand-fastings (witch weddings). It is a time to celebrate the coming in of the harvest in the northern climes. Among Satanists these dates are also a time that requires the sexual sacrifice of a virgin girl in addition to an animal sacrifice. So, again, keep an eye on your children and your animals.

Additionally, of course, as many of you know – right now we are in the last period of the Islamic festival of Ramadan. This ends July 28. That ALSO increases the spiritual level of evil during this season.

On a deeper level, these rituals are performed because practitioners believe they receive more power from the evil one. Unlike Yahuwah, Whose power is beyond infinite, the devil and his high level lackeys need to gain power from the worship of their deceived disciples and the shedding of innocent blood – animal or human. They also gain power from the defilement of innocence, because they know this displeases the Almighty. Prayer warriors interceding for the lost and spiritually bound often sense the concentration of dark evil energy ratchet up during seasons like this (we have a comprehensive list of ALL occult and Satanic holidays in the appendix of our book, LUCIFER DETHRONED).

We STRONGLY recommend additional times of prayer and fasting during these weeks for your family and also for those you minister to, and for your community at large. Pray especially for all the children and adolescents who might have no one else to pray for them!

“Abba Father, I come before Your Throne in the Name of Yahushua the Messiah our Sovereign Master. We understand from Your Word (Galatians 4:9) that these pagan and satanic ritual days are nothing but weak and beggarly elements.”

Right now, Abba, in the strong Name that is above every other name, Yahushua the Messiah, we come against the principalities and powers associated with these dark summer festivals! In His Name we cast down the strongman of Set or Sothis and declare they have no power over us, our families or our communities because we are now covering these precious souls with the shed blood of Yahushua and His tallit (prayer mantle) of Light. We further come against the strongman of Lughnasadh and Lammas and declare its power shattered by the stripes and the blood and the cross of Yahushua! We say “Yahuwah rebuke thee!”

We ask Your protection, Abba, over our families, our loved ones, our churches and our communities – especially the children and youth of our city who have no one else to pray for them. We claim all these souls for Messiah – that they might be saved and set free by the power of the gospel of Yahushua that we ALL be empowered to trample down the bastions of evil lurking within these seasons and false festivals.

We bind these strongmen together with all their subsidiary imps. We weaken them with the blood of Calvary. We command them all to GO where our Master Yahushua tells them to go by the voice of His Holy Spirit.

Finally Abba, we come to You and claim the precious souls of those deceived by the darkness of paganism, witchcraft and satanism. We pray, Abba, that every person who cries out to foul elohim (false g-ds) during these nights of unrighteous worship would be confronted with the power and the glory – of the Risen Messiah! We pray that they would fall on their faces in fear and trembling, repent and be Born Again for the Glory of Yahushua, Your Only Begotten Son. IF they reject Him and His Sacrifice on the Cross, we ask that You would send Your Mighty Malakov (angels) to pursue them into dark and slippery places where no help is! (Psalm 35:6) In Yahushua HaMossiach’s Name we pray, Omain!”

BLESS YOU FOR YOUR PRAYERS AND DONATIONS! 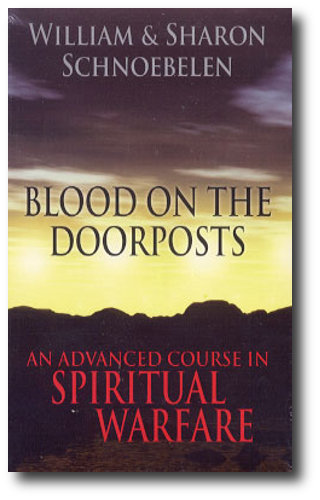 Demonic Spirit Identified – Stop Winking and Sticking Your Tongue Out