Hollywood has fooled most people into thinking the “big one” is going to happen in California, although according to Michio Kaku, a City College Of New York Physicist and Professor says that the Cascadia fault has about 30 times the energy of the San Andreas fault.

If this were to occur, we would see about 4 minutes of shaking and within about 15 minutes a wall of water arriving to the coast lines.  Shepard Smith reports that anything west of interstate 5, which includes cities like Seattle, Olympia, Salem, Eugene will be swept away. Research shows tsunamis happening in this area going back 10,000 years, with about 41 of these events occurring with approximately 240 years in between each event.   The last massive 9.0, was more than 300 years ago, in 1700, and sent a 600 foot wave to Japan.

What spurred this conversation?

Kathryn Schulz wrote a piece for the New Yorker which described in graphic detail a catastrophe to the portion of Pacific Northwest.  Tsunami’s up to 100 foot high and 700 feet across.  Her article sparked numerous other articles and debate on this topic.

The Earthquake That Will Devastate Seattle – The New Yorker

The participants were John Vidale, director of the Pacific Northwest Seismic Network; Debbie Goetz of Seattle’s Emergency Management Office; and Sandi Doughton,  science writer at The Seattle Times and author of Full Rip 9.0: The Next Big Earthquake in the Pacific Northwest.

John Vidale agreed that historically, the frequency of major earthquakes in the region is about one every 300 years, which means we’re overdue for a megaquake, however we should take note that the spacing 9 quakes occurred anywhere between 200 and 900 years.

Here are a few interesting comments on that site:

“In other places, like Chile, volcanic eruptions have followed major earthquakes. Several of Japan’s volcanoes became more active after their M 9 quake and tsunami in 2011.” Sandi Doughton

“The terrestrial record shows evidence of about 20 M9-9.2 quakes in the last 10,000 years. The evidence is a combination of buried soils that indicate the coast dropped by several feet, and sand layers deposited by tsunamis. Dating those layers reveals a rough chronology, which shows some of the most powerful quakes were separated by 900 years, and some just by 200 years. The evidence of an additional 20, slightly smaller quakes that only ruptured the southern half of the subduction zone, comes from seafloor cores that records a history of underwater landslides” Sandi Doughton 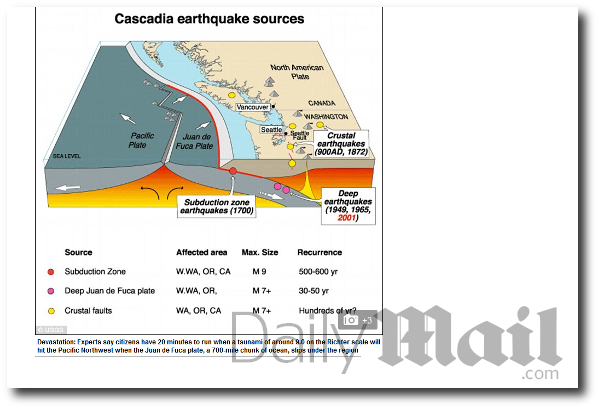 The Cascadia subduction zone hid along the Ring of Fire until 45 years ago- Read more: businessinsider.com