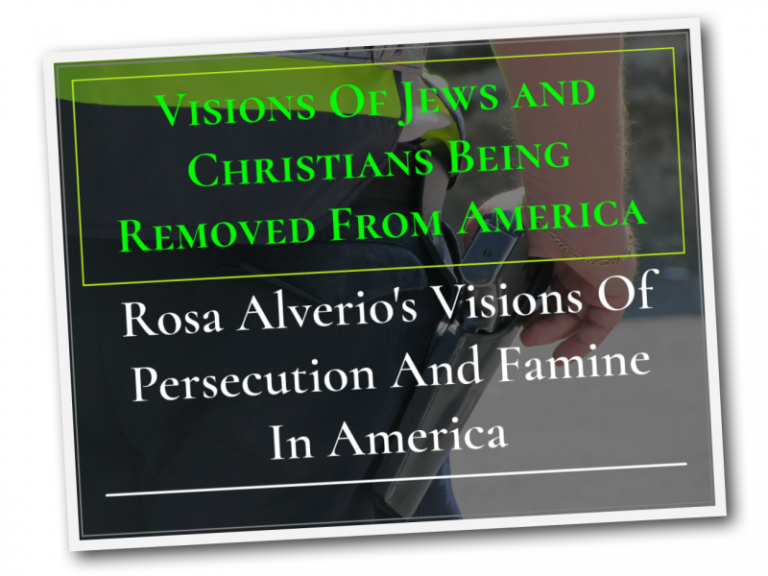 I wanted to tell you of a dream and a few visions I have had through the years.

In 1994 the Lord moved my family and I to ***** from the Bronx, NY. It was very difficult for us to understand why? His answer was that terrible things were going to happen in NYC.

In 1996, I was watching the Sid Roth show. In his show he had this Messianic prophetess. She was telling Cid, that there will be coming a time when the Market will crash and they will blame the Jewish people. They will confiscate everything from them, and remove them all from America. Of course, they will be going back to the Land.

She also said, that the next group will be the Born-Again Christians that will be removed from America.

About 2005, that program came back to my mind. I contacted Sid Roth’s ministry. This was the surprise, they told me they never had a Messianic prophetess or anything in regards to what I saw. Then I realized that I saw a vision while I was watching television.

In 2009, I took my mother to Kroger’s as we were walking through the isles, I felt like everything around had disappeared and I was the only one. As this was happening to me, I saw the shelves empty, there was no food at all. I came back to reality. I told my mother what I just saw, she said that there is coming a time when there will be famine and no food to eat. She said, the Lord was letting you know that this is going to happen.

My mom was a prophet and so was my grandmother.

She was a Sephardic Jew. My mom went home to be with the Lord two years ago she was 94, my grandmother lived to 108 and my grandfather who was also Jewish lived to 112. They were alive during the Inquisition before the Spanish/American war.

My mom already knew when I told her what it was about. Before she passed away she said there is coming a time and she will not see it, when terrible things will happen and people will fall to their knees and cry out to God in the streets.

My grandmother died in 1988, and a few months before she died, she was looking out the window and she was having a vision. She said I see fire all around the city and the world, terrible earthquakes. Now it is coming to pass.

The Lord moved my whole family from NYC. My pastor was David Wilkerson.

The Lord told us to leave NYC, because terrible things were going to happen there. We moved here in 1994.

“There are three huge pieces and numerous smaller pieces, most about the size of a football field…, ” Chuck Youngbrandt’s Vision Of Asteroids...