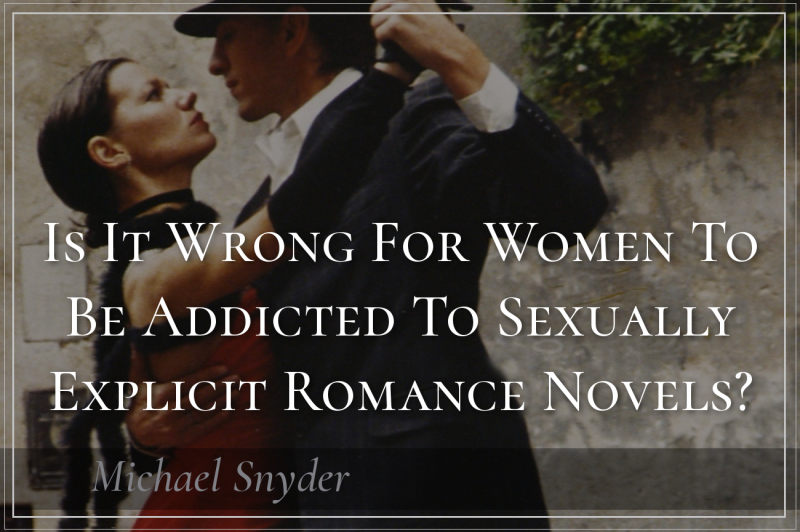 Michael Snyder, For End Of The American Dream

About a billion and a half dollars will be spent on romance novels in the United States this year.  These novels will outsell the categories of “sci-fi, mystery, and fantasy combined“, and they will account for more than half of all mass-market fiction paperbacks sold.  To say that they are popular would be a vast understatement.  Many of these novels are “clean”, innocent and even inspirational, but many others are extremely sexually explicit.  In America today, 64 percent of all Christian men and 15 percent of all Christian women admit that they have viewed pornography within the last month, and we correctly label this as a national moral crisis.  But are women that can’t get through a day without reading a sexually explicit romance novel that much different?

Today, I came across an article by a Christian wife and blogger named Chris Taylor, and I thought that I would share with you her perspective on this…

I’d packed my current romance novel into my carry-on bag. As I reached into the bag to pull it out, I noticed that a man a few rows ahead of me was reading an adult magazine. I thought, “Oh, that’s just icky. Even if no one else sees the pictures, he is going to be sitting there feeling all aroused and thinking about sex around other people. Just gross.”

I looked at the book in my hand, and in one of those “God smacked me between the eyes” moments, I realized that the man looking at the magazine with naked women was no different than my reading this book in the presence of others.

I pulled out my crossword puzzle book instead.

As a society, we consider men that look at “adult material” to be “icky”, and for good reason, but scientists have found that women that read sexually explicit romance novels also experience an “addicting chemical release”…

According to author of “Finding the Hero in your Husband” and psychologist Dr. Julia Slattery, there are similarities between what happens to a man when he views pornography and what happens to a woman when she reads a romance novel.

Women are more stimulated by romance than sex, so they read romantic stories (and they don’t have to be explicit to work) they can experience the same addicting chemical release as men do.

There are some women out there that read one or two of these novels a day.

Once again, there are certainly many of these novels that are fun and innocent, but a growing percentage of them are very similar to 50 Shades of Grey.

Shockingly, one survey discovered that 9 percent of all Christian women in America have read at least the first book in the series…

A faith-based polling firm found that “9 percent of practising Christian women in America have read at least the first book, which is roughly the same as the percentage of all women who have read 50 Shades across the country.”

And that is just one sexually explicit romance novel out of the thousands and thousands that are available.

Overall, it has been estimated that close to 70 percent of all women in the United States read at least one romance novel each year.  The following comes from Lea Z. Singh…

But according to Laurie Kahn, producer of the documentary film Love Between the Covers: “More than 70 million people in the USA alone read at least one romance novel per year, and most of them read many more.”

The US Census for 2015 shows there are 100 million women between 18 and 64 years old living in the United States. If Kahn’s number is correct, and assuming that the majority of those “70 million people” are women, then up to 70 percent of American women are covertly consuming literary pornography.

Once again, I don’t want to be accused of dumping all romance novels into the same category.

Many are as clean and innocent as a typical Hallmark movie.

But without a doubt, others are absolutely teeming with lust and perversion.  If many husbands actually knew what their wives were reading they would be completely floored.

We need to be very careful about what we feed our minds, because it determines the kind of people that we are going to become.  In my new book entitled The Rapture Verdict, I warn about the moral collapse of America and what is happening to our nation as a result.  Just electing the right political leaders will not solve the problems that we are facing as a nation.  Rather, the key is getting our hearts right before a holy God.

And I don’t want anyone to think that I am just pointing a finger at women in this article.

That means that two-thirds of the church in America is addicted to filth!

In this article I have focused on women and romance novels, but let us never, ever forget the raging national crisis that we have with our men.  Until we get this fixed, we have absolutely zero chance of turning America in the right direction.