Terry Bennett speaks off the cuff in this powerful video about the elections.  You are going to love this video!

4:27 “What the Lord told me could be the last election your nation ever has, so why don’t you vote in it….that is what He said to me.  Thats not good.  That’s a foreboding sign. If Trump gets in office I will be utterly surprised. I am not without hope in that.  I know the will of God in it, I  just have not belatedly seen the will of God enacted in most anything, because it is not a sovereign issue.  Its a church praying. We are looking for sovereignty and God’s looking for prayers. People who will join with Him, people

4:29 “What the Lord told me could be your last election your nation ever has, so why not vote in it”

” I want to correlate this with a visionary experience of some years ago. I have spoken about this experience in the past a number of times, but have not and did not know to relate it to our present situation. This experience involved a card game between Satan and Jesus Christ. The game involved the fate of this Nation (USA). Satan had the perfect unbeatable hand, a royal flush and was excited to play his hand in this nation. The Lord was in a relaxed position opposite him, one hand on the back of His seat, His right hand on the table. Satan appeared to be moving first, when Jesus Christ put up His right index finger on His right hand and said “One moment”, then out of nowhere, a card appeared in The Lord’s right hand. With force He slapped it onto the table, it was a trump card – (Donald Trump?). The Lord trumped Satan’s royal flush, deflating Satan’s joy and countenance. Best I can remember, this experience took place 5-6 years ago. I now believe this is part of it’s possible interpretation. Remember, God trumped Satan before, through Cyrus. If that’s all He has to work with, He can do so again. My motive in sharing this, again, is to call us to serious and desperate prayer for the ultimate will of God. If the purpose of the enemy comes forth, in others getting in office or staying in office, chaos, civil war and God’s wrath will be upon us.

I am not sharing everything about these encounters, but the most important points. Up until recently, I was not even going to vote, unless I heard very clearly from The Lord. My encounter with National has changed this. I do not say this to sway you but to let you see some into my own heart and encourage you to seriously seek The Lord in this.

May The Lord have His ultimate will and purpose, 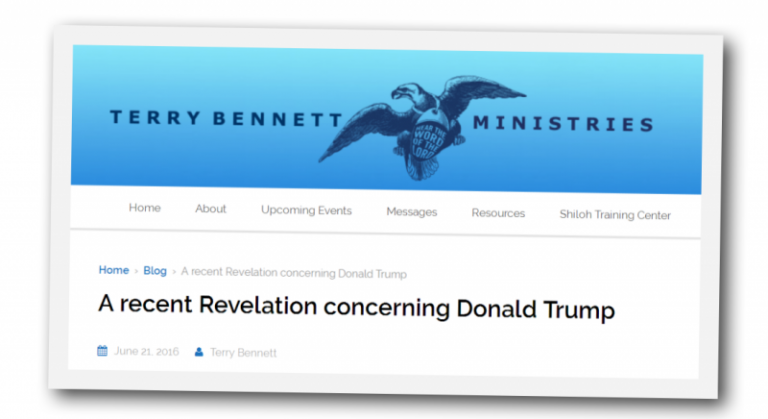 A Note from Terry Regarding Election 2016

“I wanted to clarify some things in order to help us understand some action steps we must be willing to take as the body of Christ. I do not believe that Donald Trump getting into office is sovereign, nor do I believe he has a real chance unless the body of Christ is willing to truly seek The Lord, pray and intercede in this. I firmly believe it would be The Lord’s will to use Trump as a Cyrus (as stated in previous post) but His will must be matched by our willingness as His people to awaken and be unified in prayer regarding this. If we stay in our present state of slumber and we remain unintentional, it is highly likely Clinton will take office, or our current president will stay in office. This would be a disastrous judgement to our Nation and would send us spiraling into even greater darkness at a very heightened speed.

I also want to make it clear, as I’ve stated before, I do not believe Trump is the spiritual answer to this Nation.”

2015 is the beginning. I believe we will see a progression then as we go into 2016 and onward. The economic difficulties will become increasingly strong over those months and into next year, and so will the chaos in the governmental arena. There will be a chaos for a timeframe in our government.

Regarding plagues, the eruptions will include some of that. There will drought. There will be fires. I was told this directly. There will be eruptions of fires, with some of that being not just from drought, but from other lightning type strikes, those types of things. There will be various disruptions. I was told this years ago that during this time some of the judgments of God would also begin in our nation. So there is going to be this mixture that is going to go on of the judgments of God and also of humanity in panic mode and chaos mode and lawless mode. We’re going to see that. That was the third thing actually, the third phrase given to me (by the angel) was about lawlessness.

Life and Death ; Blessing or Curse- An Election Poem By Randy Conway

“Election 2016: The Christian’s Dilemma” Dutch Sheets Take On How To Vote In This Election

The TOP 100 Most DAMAGING Wikileaks (so far)

If Donald Trump Wins, He Will Be 70 Years, 7 Months And 7 Days Old On His First Full Day In Office