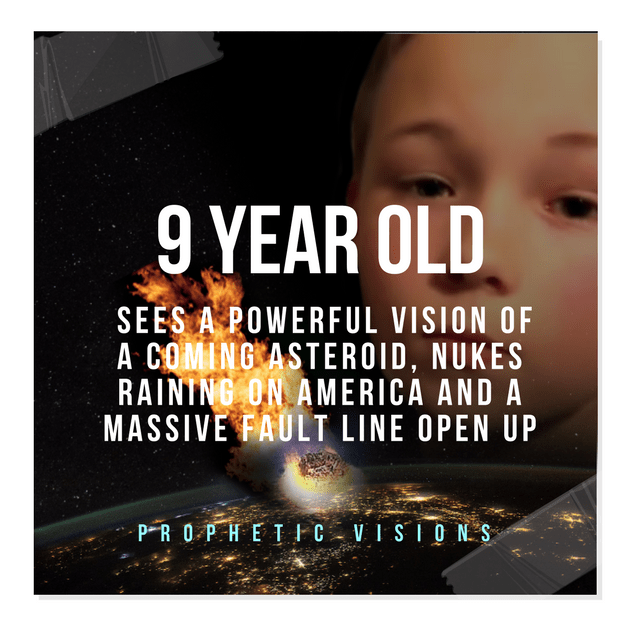 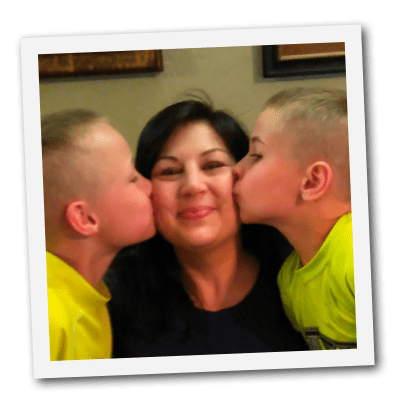 A Daughter of The Highest King uploaded a video of her 9 year old grandson who tells his account of an image that popped into his head.  He describes seeing the United States from above in space.  He understood he was looking at the earth because of the curve.

Then he describes seeing an asteroid coming towards earth and sees it hit in the area of the Atlantic ocean.  (coordinating prophecies below) 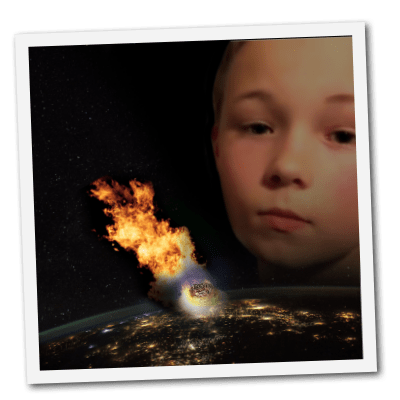 Remarkably there are many other prophetic voices who also see an asteroid hit earth in the Atlantic ocean.  The 9 year old boy points towards the ocean.

Then the image popped out of his head and he was very shaken with the experience of what he saw.  He describes the asteroid as “flaming hot red”,  and what he saw was very scary.

On the map which he has drawn it is clear to see the countries.  The “x” drawings mark the asteroids.  The “+” drawings are nukes 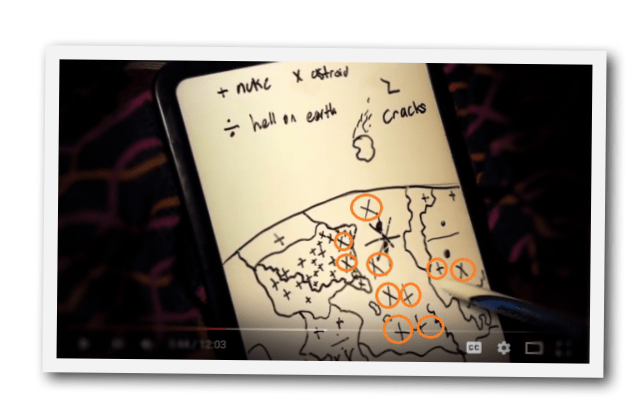 He then adds that as the asteroid enters into the atmosphere, he has the understanding that the asteroid is going to break apart.  The “x” drawings mark the places where the shattered asteroid hits.  I wanted to highlight some of the larger “x” marks with an orange highlighter.  As you can see, it seems like there is a path seen with the larger “x’s on the picture.

He then describes nukes flying over the ocean hitting America.

Many prophetic voices see Russia hitting America after the New Madrid splits open, and the tsunami’s hit America.  This very well could be the Russian attacks seen before they invade America.  Read more about this here

His grandmother then asks him about the division sign ( % ) in the drawing and he describes this as much scarier.

He says he sees lava, and giant people with goat horns.  Could he have seen the nephilim or fallen angels that are released?  He describes them as appearing like regular humans but stronger.

Even more frightening, his grandmother asks him about the squiggly lines on the map.

He describes it as the land breaking apart.  What he saw was the fault lines breaking apart where he sees people falling in.    The line he drew on America happens to be the exact same line which we see in the eclipse that happens August 21st 2017, AND the exact fault line that scientists discovered that runs 1,700 miles across the United States and intersects with the New Madrid. Could Yellowstone also be involved in this event?

I believe that God is WARNING US of an event that IS going to happen in the United States, and the coming eclipse lines that show the same location is yet another warning of that catastrophic disaster.

We can read in the bible in countless locations that when a nation turns away from God, He uses the same approach over and over again in history.  He strikes a land with plagues, famine, earthquakes and then finally invading armies.  Many prophetic voices see volcanoes go off on the west coast, followed by an extremely cold winter, with a famine that results in serious food shortages where people resort to eating human flesh.  Kids are sold for food.

This testimony from this young innocent boy reminds us that God is using the young voices to relay the message of warning to His people.  Its time to prepare… and its time to share this with people who don’t know Christ.  Its time to intercede for these days ahead.  While this may seem terrifying… what is worse is a person perishing in hell forever.  Please share the gospel message while you have time.

For thus saith the Lord GOD; How much more when I send my four sore judgments … four of my most destructive judgments—military invasion, famine, wild animals, … LORD says: I will surely send four terrible punishments against Jerusalem.

Scientists found a 1,700 mile crack across the USA.

“In Nov 1981, a study was published that rocked the scientific world, and sparked concern in FEMA circles, in which a 1,700 mile “Crack Across America” was discovered.  Worse yet, this crack cuts through the New Madrid Seismic Zone, where in 1811 and 1812 three giant earthquakes devastatingly struck the center of America”

“The results revealed an astonishing ancient rift in the North American crust that extends some 1,700 miles from Idaho to the southern Appalachian Mountains.  New discoveries, from more recent research, has extended this “Crack” anomaly in where it combines with a MegaShear [3] zone to the middle of Washington State and possibly with the Olympic-Wallowa Lineament (OWL) [2] – which reaches to the Pacific Ocean near Port Angeles Washington.  Thus the total length may total nearly 2,200 miles.”

“Intraplate pressure could be intensified into these intersecting lineaments, including the resulting pressure(s) at the New Madrid Seismic Zone.”

Could The August 21st 2017 Solar Eclipse Have A Prophetic Meaning For America?

“The truth is that I don’t know, and I want to make that very clear, but I do find it interesting that the heart of the “X” falls in portions of Kentucky, Illinois and Missouri…”

Genesis 6:1-22 – And it came to pass, when men began to multiply on the face of the earth, and daughters were born unto them,   (Read More…)

Here are some additional comments on the Video

Sarah Beth –In my dream I was in space and I saw an Asteroid , and 2 barrel looking things tried to shoot at it with these red laser beam things? It was to make it change course or smash it in pieces or something , but they missed ….It was very real , I do remember lots of water from rivers, pouring all over the City …That was early last year….. I pray it was just a horrible dream …
(shooting an asteroid to break it up is a theme I am seeing that I would like to investigate more)
GodIsLove5bc-Several years ago I had a vision during prayer of an object in the sky heading toward earth. I was interrupted so didn’t get to see exactly where it landed except that it appeared to be in the Atlantic ocean. In 2007 or 8 I awoke from a very vivid dream (nightmare!) of a nuclear explosion of a large modern city at nighttime which I believe was New York. I don’t watch adventure movies or anything like that to have caused me to dream this. January 2013 I woke one morning to “worldwide earthquake”and I posts this online in a Christian forum. Two others posted that day that they woke to “worlds biggest (or largest) earthquake”, and the other woke that day to just “earthquake”.I have also had visions of famine,war,soldiers shooting civilians,many bombs dropping from planes,missiles in the air,been told of a great “conflagration”,which is a fire to come. Also,I had a dream of a very ornate scroll and a man read it. If said “It is time to put the Prince of Persia asunder.”Abba Father,I pray for the salvation of billions before it is too late. May your  and mercy never cease. Amen.