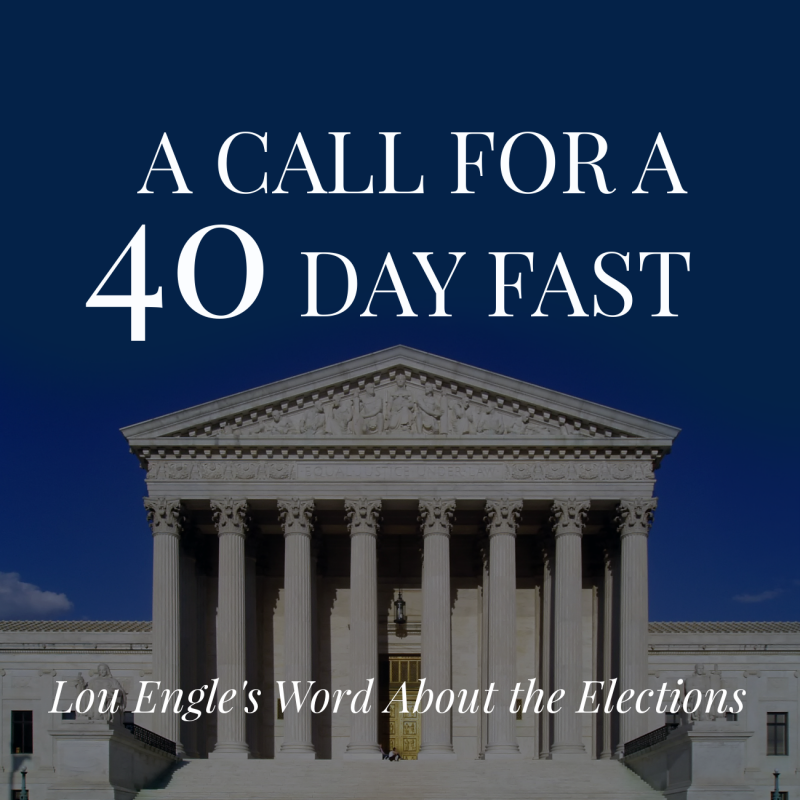 “Lou Engle’s Word About the Elections! A Call For a 40-Day Fast

There are moments in history when a door for massive change opens. Great revolutions for good or for evil occur in the vacuum created by these openings. It is in these times that key men and women – even entire generations – risk everything to become the hinge of history, that pivotal point that determines which way the door will swing.

America is in a defining moment. We believe that right now Heaven is looking for those who will shift our nation into a new day of mercy on a 40-day fast.

Over the last 20 years we’ve seen major shifts take place as the Body of Christ united in extended fasts. Even now, TheCall Team have locked themselves away for 40 days in Colorado Springs to fast and pray for a Third Great Awakening and for a shift in these elections. We believe we are in some kind of an Elijah/Jezebel showdown that will frame the future of our nation.

In our gatherings together, God began to give us revelation. One young lady who led us in renewing covenant at the first Call in Washington, DC had a dream recently. In the dream she was in DC and there was a huge celebration going on in which masses were reveling in the release of liberal laws and the throwing off of our Biblical foundations. She said it was terrifying as she watched the crowds get in buses to take that celebration through the nation.

But in the last scene of the dream she saw inside one of the buses, down the center aisle, and there was a young woman who didn’t belong there. She could tell that she was a disruption to the entire celebration, and on her t-shirt in bold letters it said:

We were stunned by this dream. “We the People” are the first words of our Constitution, which was the foundational covenant document of our nation. The Constitution espoused freedom for all men under God, guaranteeing equality and justice for all. Yet, it was the very people who swore themselves to this document that also broke covenant with the Native peoples, denied covenant to the African-Americans, and dismantled the covenant of marriage. Could it be that we are being judged now on the basis of our own covenantal document before God?

We believe we have come to a moment to stand again for the covenant of America and to uphold The Constitution. In doing so, we must first repent of all covenant-breaking in our own lives. We can’t bind what binds us.

When Daniel began to intercede for his nation in Daniel 9, he pleaded the covenant and asked forgiveness for his sins and the sins of his fathers so that he could remove accusation from the nation. This is how he appealed for the great return out of Babylon and the rebuilding of the temple. We are in a Daniel 9 moment in the Body of Christ.

For this reason, we believe that this next 40 days of fasting from September 30th through the elections could be a hinge of history moment. Let us go to the courts of the King and hold up our constitutional document, begging forgiveness where we’ve broken the covenant, and pleading mercy over our nation that we would return to the foundation that’s immovable. Brothers and sisters, we believe that this could shift history.

“I Looked For a Man to Stand in the Gap”

Another dream was given to us, and in this dream a young lady from Alaska saw the White House and in one room was Hillary Clinton and in another room was Donald Trump. Trump was kneeling down weeping and broken and she said that in the dream she knew that people didn’t know the kind of man he really was. In the dream he had the Bible open and he was reading Ezekiel 22:30, “I looked for a man to stand in the gap.”

Brothers and sisters, we must judge these dreams as prophecy. If they are God then we are in a defining moment for the covenant of this nation to stand and the covenant of our forefathers to be released for a Third Great Awakening.

We cannot afford to be jaded about these elections. We cannot be neutral and let history forge its own way. The future will be made by someone who stands in the gap and asks God to release His divine choice into this nation who will uphold the covenant. This is critical. (Photo via graphicstock)

God raises up one and brings down another. He’s the One who promotes kings but intercession can shift the mindsets of men and women all across this nation.

I’m calling all of those that I’m connected with that know me with The Call to take 40 days and pray and stand in the gap – 40 days of fasting, that God would raise up righteousness in the high places and loose another Third Great Awakening. Who knows but for such a time as this we’ve been brought into the Kingdom.

Sometimes we give elections to Caesar when Caesar was never to have the authority over the elections. I remember in 2000 when we were praying for a pro-life president. Even during the primaries a friend of mine had a dream and saw George Bush with McCain in a battle in the primaries. In the dream he saw spiritual warfare going on over the top of the primaries and then he read a line, “Render unto Caesar what is Caesar’s but render unto God the things that are God’s.

Profoundly, the interpretation came to us, that there was spiritual warfare over the elections. Therefore, only the Church could deal with that dimension because politics can’t deal with the dimension of spiritual warfare. God was saying don’t render the elections to the political process as to Caesar. It hasn’t been given to him. It’s been given to the praying Church.

Right now in these elections do not give the future to Caesar. It’s not been given to him. Render unto God the things that are God’s.

God is the Lord of the political realm!

• Watch the “Fast Forward America” video with Lou Engle here or click on image below calling for a 40-Day Fast! 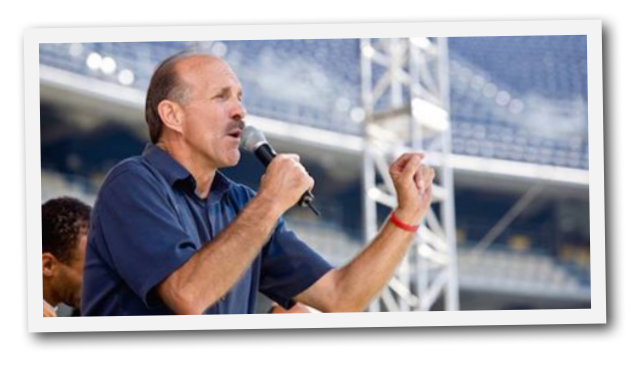 Lou Engle is a revivalist, visionary, and co-founder of TheCall, Inc. For more than three decades, Lou’s passion has been to call Believers into radical consecration through prayer, fasting, and acts of justice. Lou has been involved in church planting, establishing prayer movements, and strategic houses of prayer. He is the founder of the pro-life ministry, Bound 4 Life, and has inspired other justice movements.

Lou resides in Pasadena, California, where he is a part of the leadership team at the Pasadena International House of Prayer. He recently launched the Spiritual Air Force Academy with a mandate to train and deploy teams across the world for breakthrough intercession in partnership with missions.

Lou and his wife, Therese, have been married for 34 years. They have seven children.