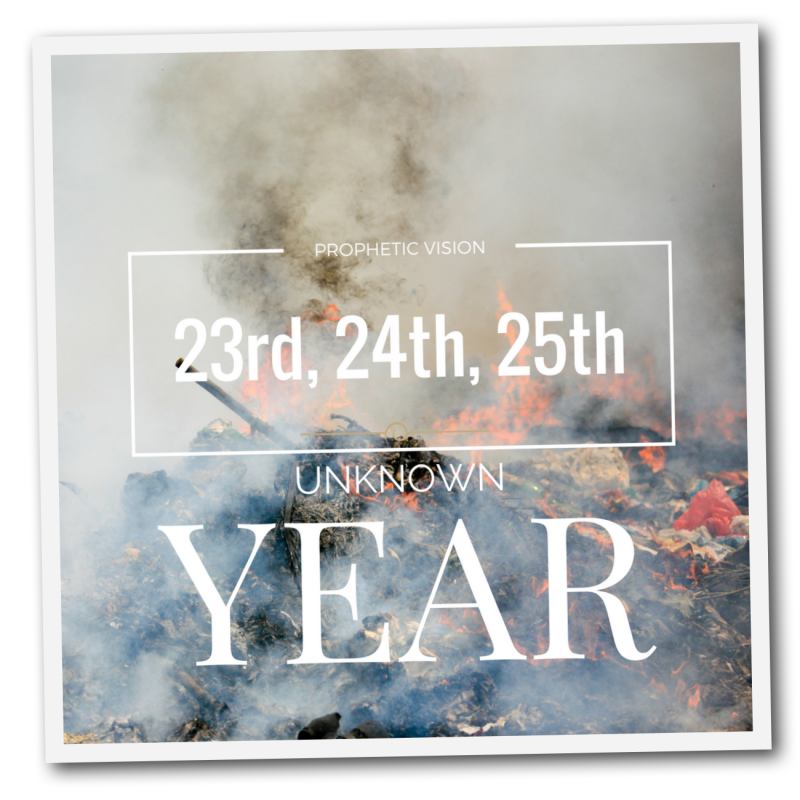 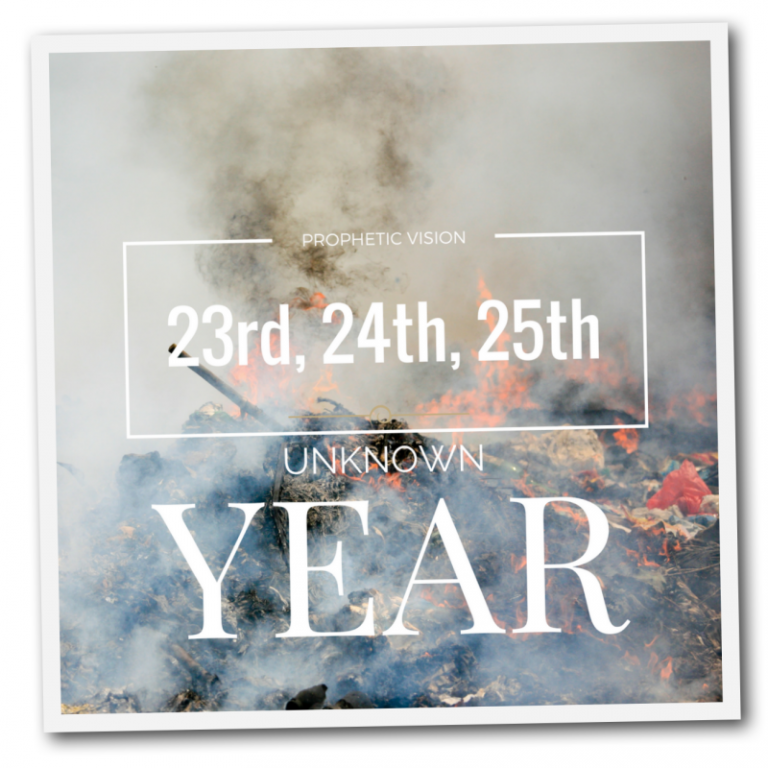 Often times when I read a “year” attached to a prophetic word or dream, I often ignore it. I look past the date, and at the content of the message and size it up against other prophetic messages to determine if it might be accurate.

Dates are often SAID in prophetic messages because the message in the dream or vision could have been bold and urgent and it can be mistaken for something that is going to take place right away.

How many times have we heard the rapture is about to happen, as if that is the only event the bible talks about?  In fact there are still many prophecies spoken in the word yet to be fulfilled.  Could it be that God is also pointing to these events in time?

I have found that quite a number of valuable prophecies have been dismissed because dates were added. I believe a lot of the time when dates are added, they did not come from the prophetic message itself, but interpreting that message.

Keep in mind that prophetic words and dreams can be delayed because events can be changed with prayer.  Other times, more time can be granted by God, simply out of His sheer mercy.  It says in the scriptures that God doesn’t want anyone to perish, but to attain everlasting life-2 Peter 3:9

This post is not about date setting, but rather presenting some information that seems to be seen in some of the prophetic dreams I have run across.

God doesn’t give these things to scare us, but to prepare us, so we are not taken by surprise. Keep that in mind.

Another occurrence I would like to investigate more are those dreams that have a blood red moon spoken in them.  I would also like to look further into when these blood red moons land on future years.

Below, you will see two words that talk about judgement with a blood moon, and then several others that talk about other events that line up.  Most of these prophetic words fit together like a puzzle.

Nicole Barber, (see her video below) sees a gigantic earthquake, a blood red moon, and a tsunami.

Gods Vessel 78  has a vision of the date Sept. 25th with no year.  She sees in a dream of missiles coming down and a tsunami hitting a city.”

God is NOT dead put together a video on a dream a man had concerning the date September 24th on some year in the future and symbols he later found on the comet 67P. One has to do with New York city, and the other one talks about a tsunami.

Steve McNeill has a dream Of Two Asteroids over NYC

Tim B sees a meteor hit the Atlantic ocean when he is in NYC .

Elijahfire Milton Wildermann  sees in a vision the Empire State building fall and NYC leveled. A great shock wave comes from nukes, and a tsunami will come to Manhattan Island. He sees Russian warships and nuclear subs, paratroopers and a full scale attack.

Kirk Adams In 2002 he saw a wave higher than the Statue of Liberty heading towards it & Manhattan. He saw a black President addressing people on the steps of the Capital building in ruins. Then a flaming meteor streaked across the sky, then the tsunami wave.

Something also to keep in mind – dreams and visions are not exactly clear on time frames.  They can relay a specific series of events, but that time frame may be immediate, or there could be years in between the events seen.

What that means is God could be giving someone a series of events, but the time frame which they occur, is unclear.  Often times we think they happen in one moment, but they could be separate events.

Mark Blitz first discovered the tetrad of blood moons to coincide with important Jewish festivals. The eclipses in April 2014 and April 2015 occurred at the same time as Passover, while the October 2014 and September 2015 eclipses occur during the Feast of Tabernacles. Sept 23rd.

Did you know there was another blood red moon on Purim this year (2016) on March 23rd? 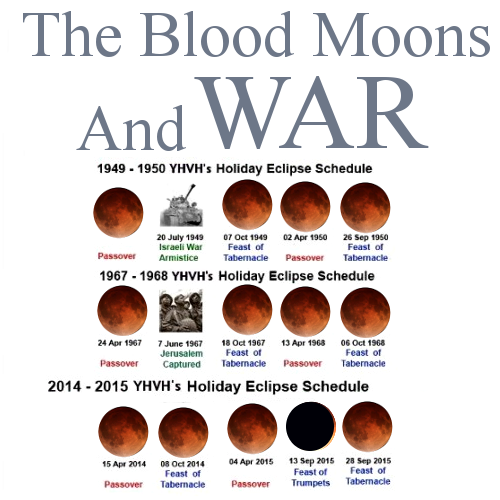 It was always my understanding that these blood moons were a signal to Israel for upcoming war, or something to do with Israel.

Michael talks with Jim Bakker why the land divide was planned for the fall of 2015, but Obama decided not to go through with it.  Could judgement for America be paused?

Could the blood moons for 2015 signal a divide for Israel that was about to take place?

Could The Disasters Prophetically Warned About In 2015 Been …

We know that eventually the land will be divided, and possibly that is what the blood red moons might be signaling.

Although, it could be that these moons might signal important events in the future on the dates they appear.

We all can speculate, these things.  We really do not know

These charts belong to Paul Grevaz. You can see some of his work below:

You also might find it interesting that the sign in the stars that is talked about in Revelation 12 happens to correlate to the alignments in September 22/23, 2017

It is not my position that the rapture will take place, but rather something significant with Israel.

In Revelation chapter 12, John sees a vision of a woman “clothed with the sun, and the moon under her feet, and on her head a crown of twelve stars”. Some say that there is a similarity between this description and the description that Joseph gave of his father Jacob (Israel) and his mother and their children (Genesis 37:9-11). The twelve stars some say, refer to the twelve tribes of Israel.

We will have to watch and see what happens.

The crucial part of the sign is the pregnancy of the constellation in the 42 weeks leading up to Sep 23. Jupiter only does this every 83 years which is a little under a 100 times in the 7,400 years. Further the moon is only at the feet of the constellation once every 19 years.

All of these cycles combine to make the Sept 23 sign very unique.

Check out this You-Tube video I have done about the rarity of the Rev.12 sign …. http://bit.ly/1qTwrLs 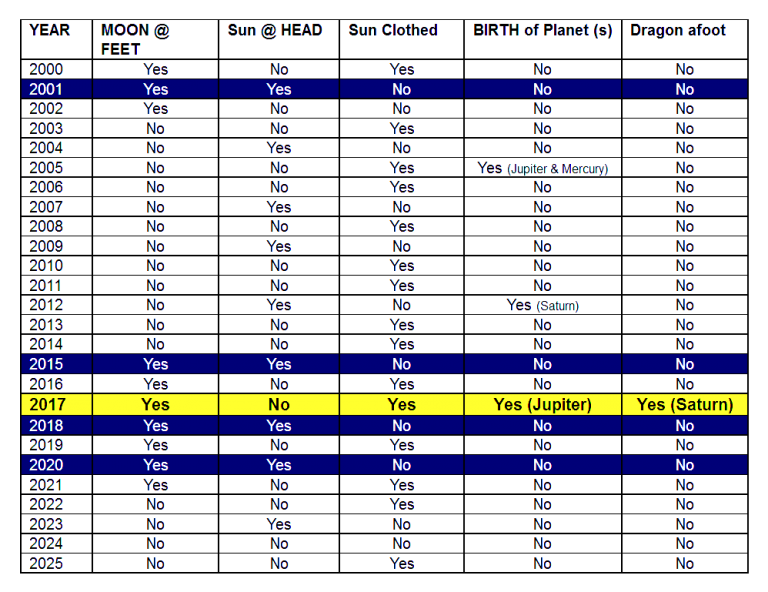 The Revelation Sign: 2017- Precisely on only 4 occasions since 2000 to 2025 will the Moon have been or will be under the Feet and the Sun in the Head regions in Virgo but not unlike the composition that occurs in Virgo sign of 2017. Yet out of all the years, only on 3 occasions has a ‘birthing’ type occurred, as with a planet and only one planet that is associated with a serpent symbology is Saturn in 2012 and 2017. In 2012, Saturn was ‘birthed’ out of Virgo and in 2017, Saturn will be in the sign of Ophiuchus-Serpens.

Out of these 3 planet ’birthings’, only the one that occurs in 2017 when the Moon is under the Feet and the Sun ‘clothes’ Virgo with the Sun. Saturn is indeed associated with a ‘dragon’ or serpent as Saturn is at Ophiuchus/Serpens just above the Ecliptic. The consideration of what is under the Feet will constitute having the Moon directly in the vicinity of the Feet of Virgo, above the Ecliptic. What constitutes a ‘birthing’ is when a planets traverses in-between the legs of Virgo.

What the 2017 Virgo sign has in terms of differences from the other 4 Virgo signs of 2001-2015-2018-2020 is that Jupiter is ‘birthed’, not Mercury or Saturn. Jupiter is ‘Birthed” on 9-9-2017 to be precise in Virgo. Thus the 2017 Virgo sign is unique in that it fulfills the vision in all astronomical aspects. Lastly on 2017, there are 2 interpretation of how the 12 Stars could be counted, 1) the 9 starts that are in the Head of Virgo itself or 2) the stars of Leo which are 9, plus the 3 Planet Alignment of Mercury, Mars and Venus to make a total of 12 ‘stars’ on Virgo’s ‘head’. Thus all 3 constellations, Leo, Virgo and Serpens-Ophiuchus are a continuous ‘sign’ linked together by astronomical symbology -exactly depicted as in the vision of Revelation 12.

“The Sphinx is also associated with the 3 Great Pyramids of Egypt that have been shown to mirror Orion’s Belt and certain alignments of Planets at particular times. (See Giza Planetary Alignment online chart here.) Most noticeably, the 3 Planets that ‘mirror’ the Pyramids’ geometry and distance during the September 23, 2017 Virgo sign are Mercury, Mars and Venus. On the September 23, 2017 these 3 Planets compose the same exact ‘angle’ and distance as the Pyramids of Giza on Earth. They make up the ‘crown’ of Virgo in the constellation Leo, or as it were the ‘Sphinx’. In other words, part of the Virgo sign in 2017 has a ‘picture’ and association with the sacred geometry of the Pyramids. As to its meaning and implication? That is for further research and study at this time” Read more at fivedoves.com

We will have to watch and see what happens. It certainly is quite fascinating!  Below are screen shots of the prophetic words mentioning the 23, 24, and 25th. 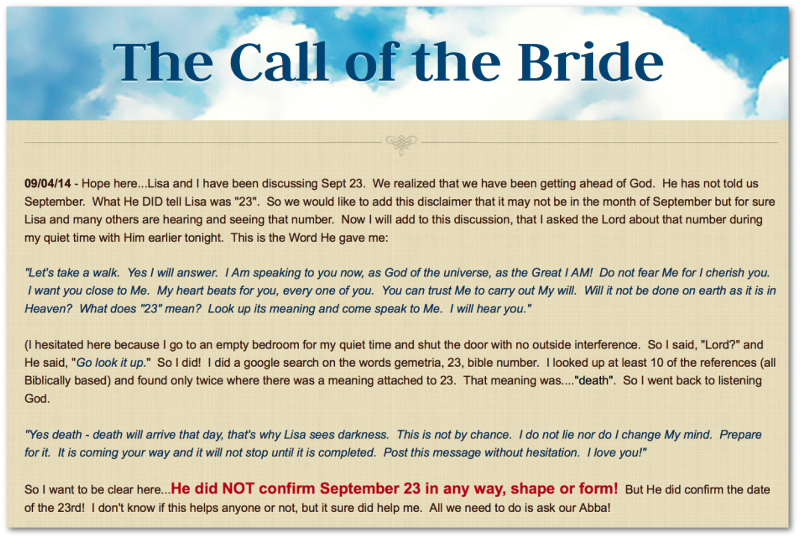 Lisa From Call Of The Bride

She did not conform “September 23rd”, just the 23rd

“I was instantly horrified at the symbols and knew that it was a message to the elite to gather together for the “Big Event”, and something extremely horrible was going to happen on earth.

I wanted to know when this was to happen. Then the words were said to me 9/24.” 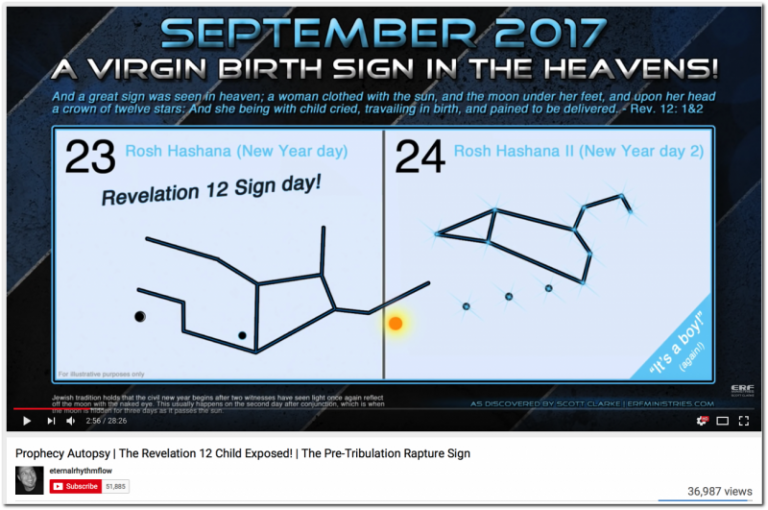 Revelation 12 has to do with Israel.  Is this significant sign in the sky that the bible talks about – a warning sign to Israel?

Could Blood Red Moons Be A WARNING SIGN To Israel?

A blood red moon on the 23rd, could this be a date in the future? 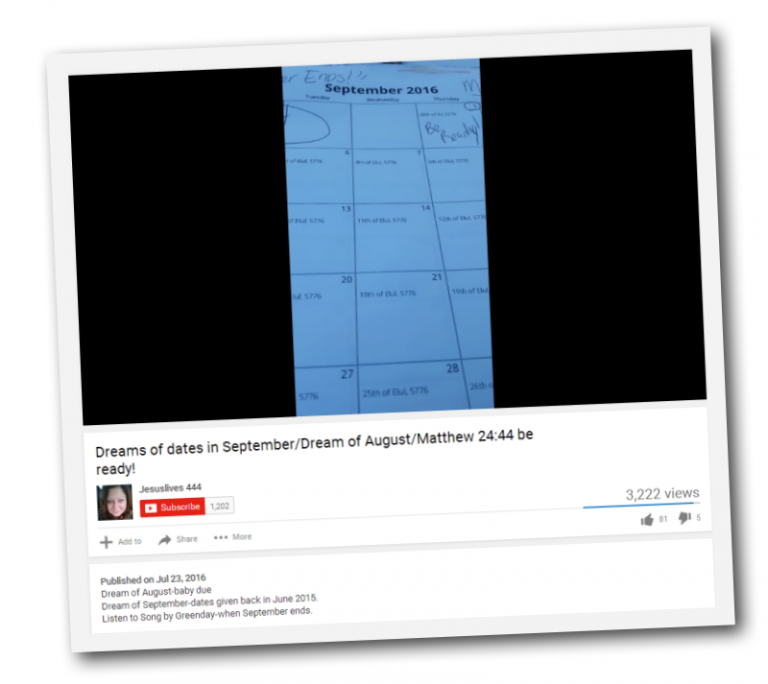 Jesus Lives 444 On Youtube recorded a video back in July 23rd where she talks about a dream where she was given a bunch of dates in September. The dates were 2, 4,9, 23, 24. She is not sure what year this may be. See the video here

Notice the date she published this was the 23rd. 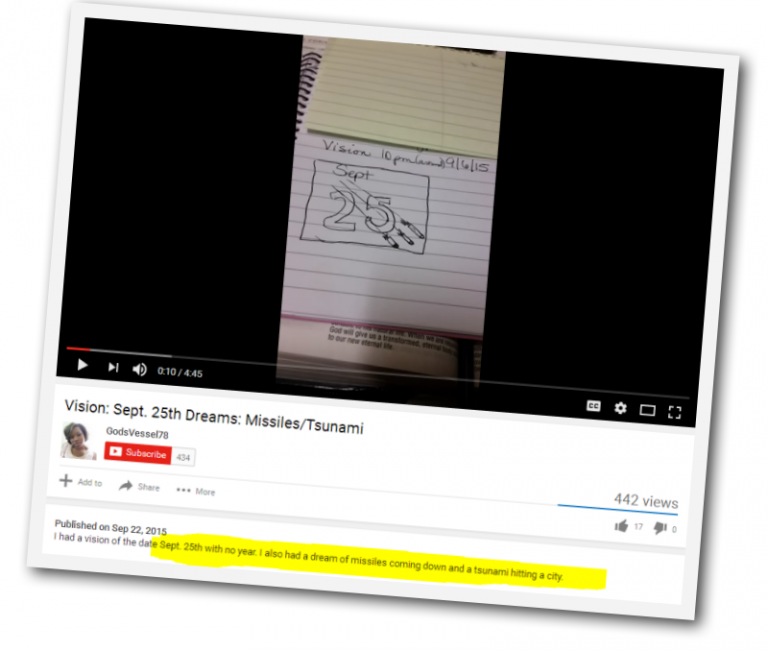 “I had a vision of the date Sept. 25th with no year. I also had a dream of missiles coming down and a tsunami hitting a city.”  See this here 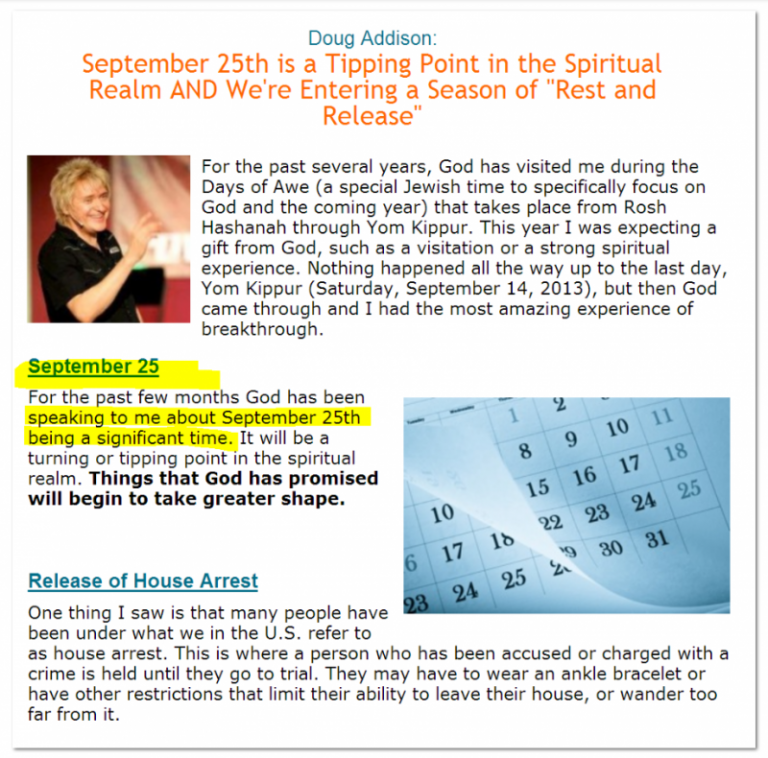 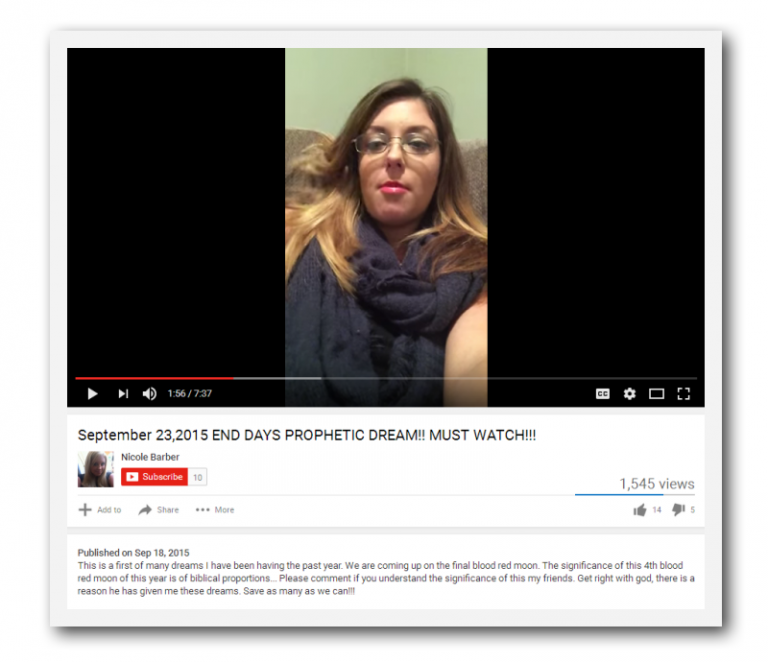 She has the date of September 23rd.  In this dream she sees a gigantic earthquake, a blood red moon, and a tsunami. She then sees fallen angels appear in the sky. Solders gather up survivors.  She also sees shockwave that was released on the people.      Watch the video here

This may be worth investigating!