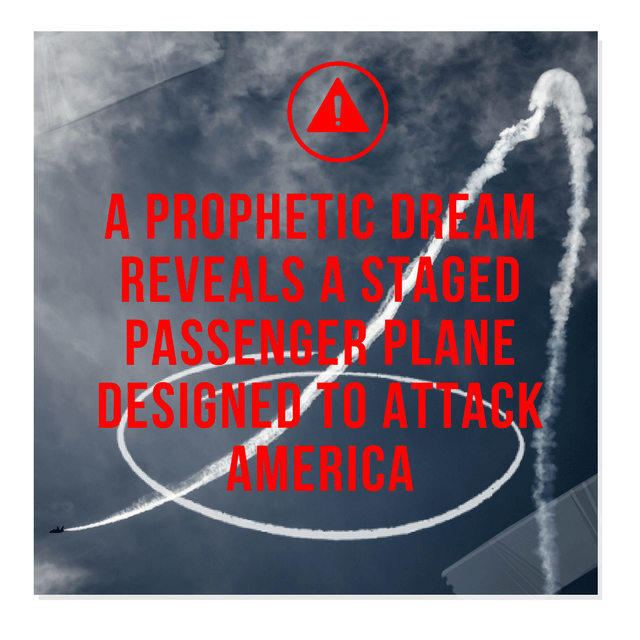 Watch the above video for a message from Stan Johnson

As you can imagine, I keep notes of information to keep on various topics of Bible Prophecy. In the e-newsletter today I am going to simply include my N. Korea notes. I think it says everything which needs to be said on the issue of N. Korea.

I think that N. Korea could fulfill the prophecy concerning the series of suitcase nukes.  Though we do not have direct prophecy saying they are connected, the prophecies and article below are enough to send all of us to our knees.

If China does not stop the N. Korea problem, it appears we are heading to greater problems!

“There is a chance that we could end up having a major, major conflict with North Korea.”   – President Trump

TRUMP TWEET:  North Korea is behaving very badly. They have been “playing” the United States for years. China has done little to help!  MAR 17

TOKYO – The Trump administration made a clear break Thursday with diplomatic efforts to talk North Korea out of a nuclear confrontation, bringing the United States and its Asian allies closer to a military response than at any point in more than a decade.

Secretary of State Rex Tillerson said that 20 years of trying to persuade North Korea to abandon its nuclear program had failed and that he was visiting Asia “to exchange views on a new approach.”

Soon after Tillerson’s remarks, in a sign of mounting tensions, the North Korean Embassy held an extraordinary news conference in Beijing to blame the potential for nuclear war on the United States while vowing that its homegrown nuclear testing program will continue in self-defense. READ MORE

Thank you for your support and may God protect and bless us all, 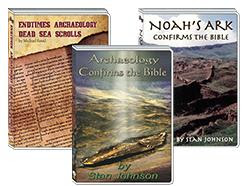 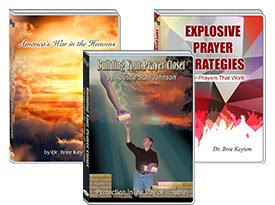 This “Prayer Gift Offer”will give you just what you need to know how to have POWER in your prayer life.

2 Corinthians 10:4 “For the weapons of our warfare are not carnal, but mighty through God to the pulling down of strong holds;”

For Christians, there is nothing more powerful than prayer.  It is our direct communication with the Father.  Scriptures tell us that not only does he hear our prayers but as a good Father he gives to those who ask Him.

As Daniel 11:35 says, There is a test coming for all of us…some of them of understanding shall fall, to try them and to purge, and to make them white, even to the time of the end: This talk will help us stand in the face of death!

Building Your Prayer Closet: Protection in the Day of Trouble – Stan Johnson

Stan Johnson explains the secret place of God’s protection. Discover why God protected David from a lion and bear; Daniel from the mouth of a lion; Shadrach, Meshach, and Abednego from the flame of the furnace; and even in modern times, Dumitru Duduman from the electric chair. Stan talks about how he was led by God to build a prayer closet, how he built it, and what he discovered there. He will explain how to build your own prayer closet relationship with God and give you some simple steps to get you started all the way to the most advanced ideas. If you want to get closer to God, close enough to get God’s supernatural protection from trouble, this is for you. 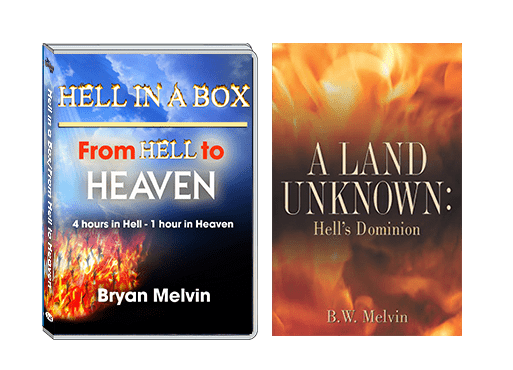 Hell-is it real or the product of myth? Are the accounts from people who claim to have seen it during a near-death experience genuine or mere imaginings? The near-death experience-is it fact, fiction or fable? Melvin gives a vivid account of seeing what lies beyond the grave from the perspective of a near-death survivor’s journey to hell.

Get both the DVD and book by Bryan Melvin about his incredible testimony of being in Hell for 4 hours and Heaven for 1 hour. Both for a gift of $45 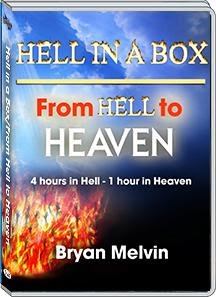 “I woke up expecting life to continue. But that day, I accidently drank contaminated water at a construction site. I spent days in extreme pain losing body fluids so fast that I went into shock and died!  I was a militant atheist and discovered life after taking my last breath. I was propelled to face the governor of the universe of whom I had denied even existed. Suddenly, I was facing judgment and was sent to a place that makes your worst nightmares seem tame. Trapped inside a 10’ x 10’ cube, a cell, with demons around giving the illusions of people and places I had known, separated from love, hope, joy, peace of God forever. I was reaping what I had sown in life.

Heat so hot, screams so loud, I was all alone and lost in my own worst night terror that I couldn’t wake up from that which exposed me for who and what I really was. Darkness, gloom, living in scenes where I relived forever as the victim of my own betrayal, wounds, rejections, of friends, family, God… Lost forever never to return…it only got worse with each passing moment. No friends, no hope, truly lost, it was just me and the demons, isolation, my own sinful life provided the avenues of torment: My worst fears came to pass, forever and ever!”

From Hell to Heaven

Topics:
• Life After Hell
• The PTSD Of Hell
• Translated To Heaven
• Matches  with Scripture
• Jesus: The Son Of Man
• Land Of “Liquid Love”
• Field Of Reunion/Reconciliation
• Know Everything In Heaven
• The Grand Estates
• The River Of Life
• Glowing For Three Days

In the DFW area? Come be a part of our studio audience!
Speaker: Bryan Melvin
Topics: Hell in a Box/From Hell to Heaven
2 Topics – One talk
Sunday, April 30th
Please be seated by 8:30am
Speaking from 9 to Noon
NO CHARGE!
The Spirit of Prophecy Church
2540 Avenue K, #100
Plano, TX  75074