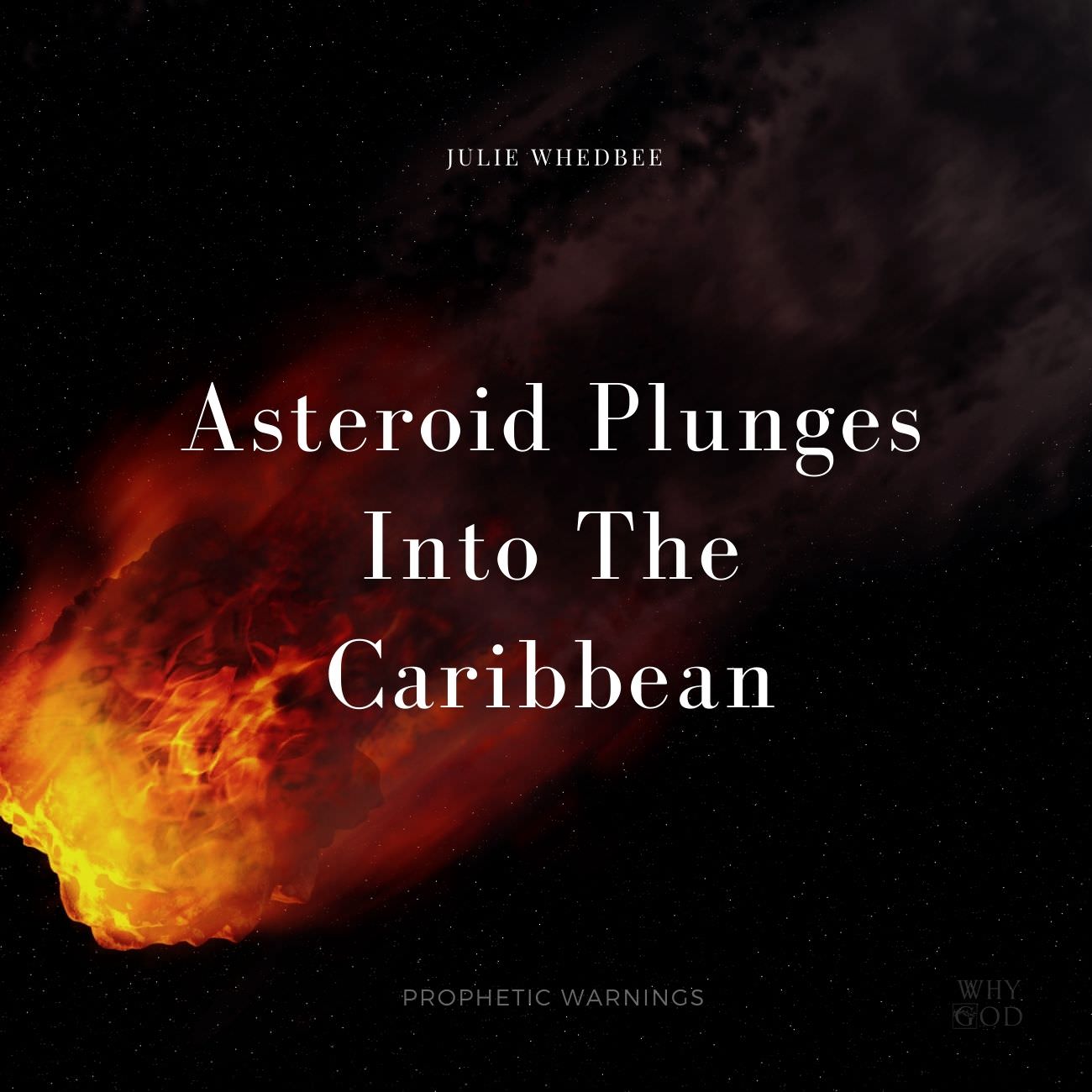 Julie Whedbee For Behold I Come

On November 3, 2019, I was given a very powerful night vision. I was in the Caribbean, witnessing at a large shopping center, sharing the gospel with anyone who would listen. I remember thinking, even though there were hundreds of people busily walking by me, there were so precious few that were interested in the message of Yahushua and His salvation. I also remember some mocking me as I shared His heart with the few who would listen.

Suddenly, I was transported to a large boat, filled with people who were on holiday, not a care in the world, carrying on with worldly talk and activity, when suddenly in the sky I was shown a large fiery asteroid that was about to hit the ocean. I was a bystander on the boat listening and watching people as it happened, but also I was able to be in the spirit as it happened so my perspective was more comprehensive. I yelled to people to look up as it hit, but there was not enough time for anyone to do anything anyway. I could then hear the screams of the entire community as I was also in the spirit, people everywhere in the islands of the Caribbean terrorized by what was happening. I could also simultaneously hear news reports all over the region suddenly announcing the asteroids sudden appearance and imminent arrival. People were taken completely off guard, not even realizing what was happening, and completely unprepared spiritually for this event of judgment.
The asteroid hit was such force, the entire Caribbean shook in violence as a massive wave instantly overtook the islands. In an instant, I was then under the ocean, as the boat I was on had overturned. I was watching now in the spirit underwater, the incredible destruction that was taking place before my eyes as all structures and foundations, no matter how large or fortified, were crushed to pieces like toys as the debris was now filling the water with great speed. I saw one massive type resort hotel be thrown down and crumble under the ocean like it was paper dissolving. I could hear in the spirit newscasts around the world as this happened, reporting the event, as the entire world was broadcasting this breaking news on all stations. I could hear the reports simultaneously as they broadcasted, and I heard that at the moment the asteroid hit, there was a massive worldwide earthquake that was being felt. Not one area of the world was unaffected because of the size and force in which this asteroid hit.
I saw many bodies instantly under the water from all over, knowing in my heart that there was no time for repentance, the judgment had happened too quickly.
————————————————————————————————–
There are others who have seen this prophetic judgment as well and the information is available online from many sources, so I will not elaborate further, only to say that time is up, the end is here, and you do not know at what hour your life will be required of you.
REPENT! REPENT!
YAHUSHUA THE KING IS COMING!!
Other Posts From Julie Whedbee

An Asteroid Hits The Atlantic Ocean At 2AM, 1000 feet high Tsunami Hits Florida At 5AM-Efrain Rodriguez

God showed Efrain Rodriguez there will be a full moon when God’s judgment falls in Puerto Rico. A large rock, or Asteroid will hit the ocean around the 2 AM time frame and will hit  an active earthquake fault found in that area of the Caribbean causing a very strong 12 point earthquake.  The impact of the asteroid will be identical to a nuclear explosion and cause a tsunami over “1000 feet high”.  The wave arrives in Florida at 5AM and then continues up the entire east coast of the United States.

There will be a full moon when judgment falls in Puerto Rico.  God showed me a large rock, an Asteroid, entering the airspace of the town of Arecibo in Puerto Rico, and exiting Mayagüez, heading to the ocean. This will be at 2am. This rock will be making impact in the sea between the island of Mona and Mayagüez. It will hit an active earthquake fault found in that area of the Caribbean, causing a very strong 12 point earthquake that has never been seen. 12 degrees means the Presence of God on the Earth.

The impact will raise a giant wave, over 1,000 feet high, which will be entering the west part of the island immediately, reaching places never thought of on this earth. The water will reach the municipalities of Las Marias and Maricao, where Satanic priests constantly sacrifice newborns babies throughout the year in Puerto Rico.

For many, there will be no time to escape the impact. Prepare at home with the Lord. Ask The Holy Spirit now what His plans are for you that night. Some will be asked to move, others to stay. Many will leave with the Lord Jesus that night. Some will have one last minute to ask the Lord for forgiveness for not having believed His warning. The impact of the asteroid will be identical to a nuclear explosion. The priority of this message is God’s judgment for His pastors and apostate church across the island of Puerto Rico. It will start there and then spread to the Caribbean, the U.S., Central and South America, Canada and Europe.