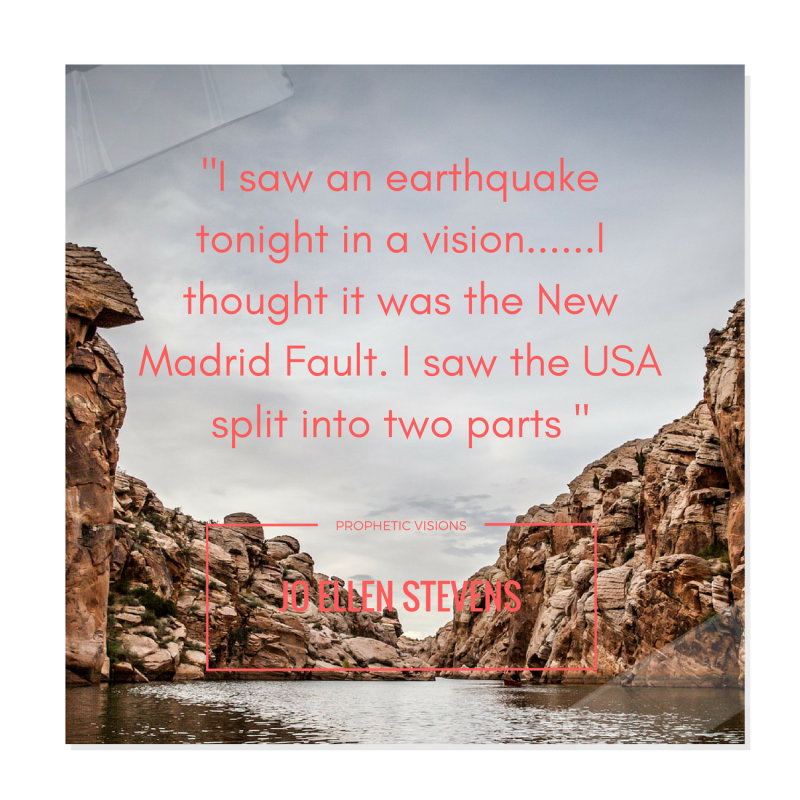 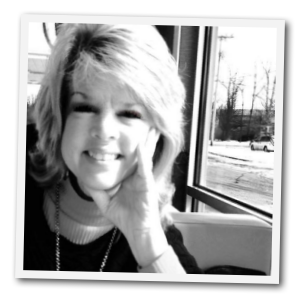 Posted on 29 May 2013 by Jo Ellen Stevens
hiskingdomprophecy.com/
Jo Ellen Stevens Dreams,Visions,And Revelations
Jo Ellen Stevens of TCIC Ministries is a Prophetic speaker, author, worshiper and intercessor.  She has ministered with her husband for 23 years and was a worship leader at the Assembly of God for many years.  She is an ordained minister (Restoration Ministries) and works with Restoration Ministries in their Ministry Rooms doing prophetic worship with her husband.  She has taught many bible studies and have led many intercessory prayer groups.

Acts 16:25-26   “And at midnight, Paul and Silas prayed and sang praises unto God: and the prisoners heard them. And suddenly there was a great earthquake, so that the foundations of the prison were shaken: and immediately all the doors were opened, and every one’s bands were loosed.”

I saw an earthquake tonight in a vision. A very quick vision: I thought it was the New Madrid Fault. I saw the USA split into two parts. There could have been others, but this is the one I saw. Then the Lord said that not only is He shaking the foundations of many institutions as we know it, but also there is coming a shaking in the natural realm. The Lord said “look at these passages of scripture” above. Earlier in this chapter this happened.

Acts 16:16-19    “And it came to pass, as we went to prayer, a certain damsel possessed with a spirit of divination met us, which brought her masters much gain by soothsaying: The same followed Paul and us, and cried, saying, These men are the servants of the most high God, which shew unto us the way of salvation. And this did she many days. But Paul, being grieved, turned and said to the spirit, I command thee in the name of Jesus Christ to come out of her. And he came out the same hour.  And when her masters saw that the hope of their gains was gone, they caught Paul and Silas, and drew them into the marketplace unto the rulers.”

Like never before in history have we seen such a spirit of divination that has come into the church like we have now! This woman was saying all of the right things claiming that Paul and Silas were servants of the Most High God, “But Paul, being grieved, turned and said to the spirit, I command thee in the name of Jesus Christ to come out of her.”

The Spirit of divination is (the practice of attempting to foretell future events or discover hidden knowledge by occult or supernatural means.)  So Paul being grieved discerned this spirit…Got it? The Grieving is a sign that this is a Spirit and not The Holy Spirit.  It had followed him for days, but the gift of discernment of spirits came upon Paul and he then told it to come out.

There is a spirit in the land that flatters men and women of God and tries to lead them or turn their heads away from the course that they are on. It flatters and brings in much gain to its masters (The Religious System).  I had a prophetic dream about this spirit once.  It was standing outside of the church (Very important). The true church and as people would walk up to her (It was a woman) and as she would lift her hand as if to lay hands on them they would fall out in the spirit.  I use a small “s” here to let you know that it was not the true Spirit.  I saw her and wanted what she had at first and as I walked closer to her before I could get close, I looked down and all that had fallen out under her power were laying in Pentagrams!  The Lord said to me in the dream.  “This is a false Holy Spirit”.

The spirit of divination will flatter and try and lead you away from the true purpose of God. Seeming spiritual at the time, but all the while that you are being led by this spirit you have a grieving inside.  When you sense this in your spirit you must speak to it immediately.  Only the Holy Spirit should be leading you.

John 16:13    “Howbeit  when he, the Spirit of truth, is  come, he  will guide  you into all truth: …..”  After Paul confronted this spirit of divination or (false holy spirit) he and Silas were beaten and placed in stocks in the prison, because they had taken away the financial gain of the woman’s owners who profited from her divination.

God is going to begin to confront that which is the true and the false spirits in His Church, The gift of discerning of Spirits is about to come upon His true Prophets and they will begin being grieved over the divining that is in the very church itself! This will begin to cause a shaking in the foundation of the church and people will begin to see the true and the false church in this hour, but it will also cause the false church to rise up against those who are truly speaking from the Spirit of God!

I believe as this persecution comes and it is coming very soon and is now happening. The true church will arise and begin to be the true worshipers of God!

Amos 9:11 “In that day will I raise up the tabernacle of David that is fallen, and close up the breaches thereof; and I will raise up his ruins, and I will build it as in the days of old:”

This was God’s favorite House!  This was the tabernacle where David established 24/7 worship and it caused them to win every battle. It was open and the sound went out and God inhabited their praises! and it caused Him to surround them as they dwelt in the Secret Place. This sound, this roar that will come out of Zion, the true Zion of God will be heard in the land!

Joel 3:16    “The Lord also shall roar out of Zion, and utter his voice from Jerusalem; and the heavens and the earth shall shake: but the LORD [will be] the hope of his people, and the strength of the children of Israel.” The children of promise are Israel as it says in.”

Romans 9:6   “Not as though the word of God hath taken none effect. For they [are] not all Israel, which are of Israel.”  So this promise is for the church also!

I believe that this roar will be the sound that will begin to change the molecular structure of the Earth literally as Paul and Silas’s Praise began to cause a molecular change in the earth from the Lord! By the way, they were singing the Halal of God – Psalms 113-118. If you look at these passages they were saying in song exactly what God did that night in the midnight hour! As we bring forth this sound and declaration we will then see both Natural and physical earthquakes! This is all in answer to the prayers and the worship of the saints of the Most High God! God is coming in answer to this roar saying, “Enough is enough!!” But He will be our hope and strength in this hour, Glory to God!!

This Earthquake will cause two things to happen in our land. It will cause the chains of the religious bondage to come off of us in this hour!!

Act 16:26   “And suddenly there was a great earthquake, so that the foundations of the prison were shaken: and immediately all the doors were opened, and every one’s bands were loosed.” Glory to God!!! Did you hear that in the Spirit??  God says, “The foundations will be shaken!! Then, the doors will open for us to go out to those in bondage and release them!! Then everyone’s bands will be loosed!!! Why? This is the reason…

Act 16:27-34   “And the keeper of the prison awaking out of his sleep, and seeing the prison doors open, he drew out his sword, and would have killed himself, supposing that the prisoners had been fled.  But Paul cried with a loud voice, saying, Do thyself no harm: for we are all here.  Then he called for a light, and sprang in, and came trembling, and fell down before Paul and Silas, And brought them out, and said, Sirs, what must I do to be saved?  And they said, Believe on the Lord Jesus Christ, and thou shalt be saved, and thy house. And they spake unto him the word of the Lord, and to all that were in his house. And he took them the same hour of the night, and washed [their] stripes; and was baptized, he and all his, straightway.  And when he had brought them into his house, he set meat before them, and rejoiced, believing in God with all his house.”

God through the shaking, because of our Praise and Declarations is about to cause those that persecuted us and kept us in bondage to come to the true church and say “what must we do to be saved!!” Yes, He is coming to rescue His people from their bondage as in the Exodus! Yes, He is coming in answer to the praises and declarations of his Church! Yes, He is coming to the sound of our worship in the midst of our midnight hour! He is coming with Thunder and lightning and He will come to us in shaking to cause the greatest awakening the world has ever seen!!

Isaiah 30:30-32   “And the LORD shall cause his glorious voice to be heard, and shall shew the lighting down of his arm, with the indignation of his anger, and with the flame of a devouring fire, with scattering, and tempest, and hailstones. For through the voice of the LORD shall the Assyrian be beaten down, [which] smote with a rod. And in every place where the grounded staff shall pass, which the LORD shall lay upon him, it shall be with tabrets and harps: and in battles of shaking will he fight with it.”