I stumbled across this video which happened to be a terrific watch.

The first part of the video Stan Johnson explains an article that Michael Snyder, from the The Economic Collapse Blog wrote on the shortages of diesel fuel.

You can read the article below this video which explains that there is a shortage of 3 valuable components that go into our 18 wheeler trucks that happens to be in dire supply right now.

The shortages are of diesel fuel, but also diesel exhaust fluid and diesel engine oil.

What most of us don’t fully comprehend is, you need all three of these components for our modern 18 wheel trucks to run.

In the video Stan reveals when he went to prayer, he asked for some clarification from the Lord and listed 3 people that God could give the dream to. One of the 3 happened to be a friend they ministered with at one time but hadn’t heard from in a long time.

The next morning that friend, Pastor Masih, phones Stan Johnson wanting to tell him a very interesting, yet short prophetic dream he had.

In short, the dream was a warning dream that the wheat would run out, and the 18 wheeler trucks that ship our goods around the country would stop running.

With the evidence below in Michael Snyder’s article, you can see how this could be entirely possible soon.

If you need to buy some supplies, now is the time to do it, as you may not be able to get in that item if these trucks cannot deliver to the stores. 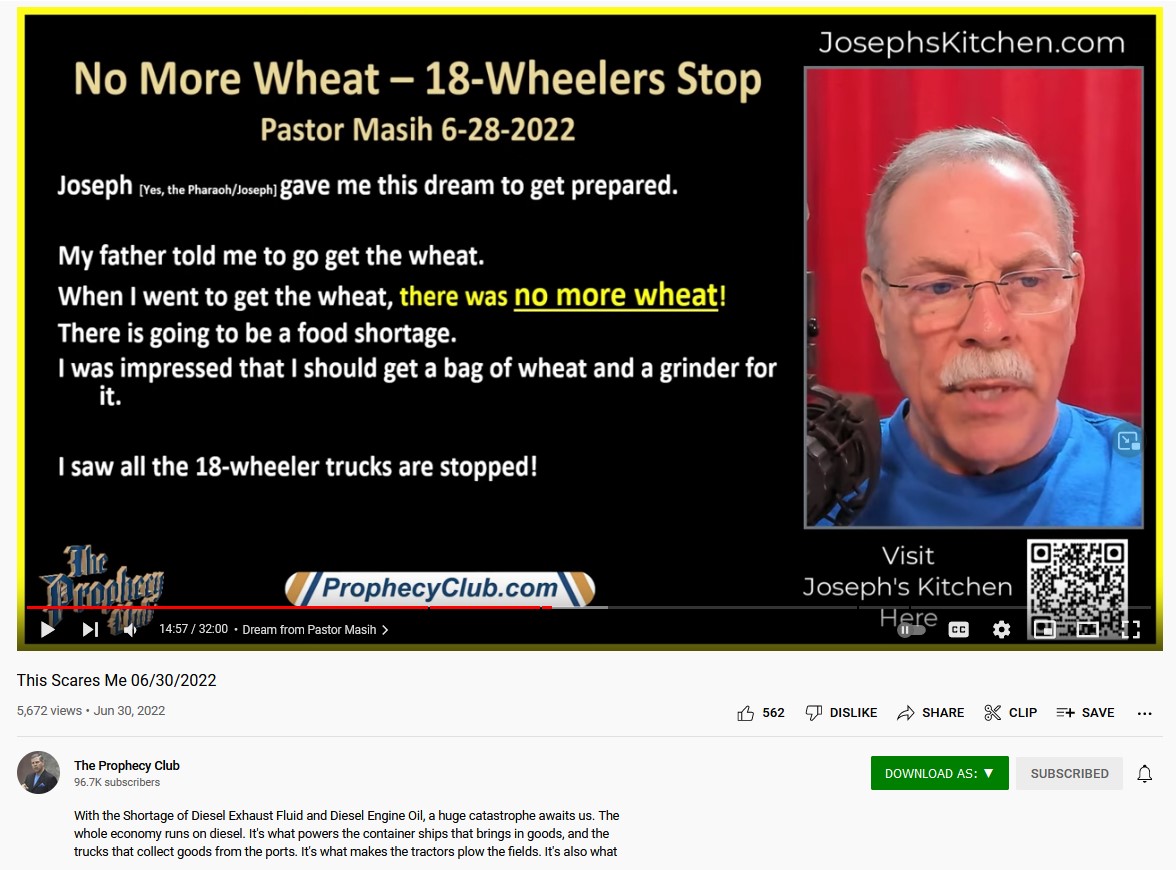 Joseph, gave me this dream to get prepared.

My father told me to go get the wheat.

When  I went to get the wheat, there was no more wheat!  There was going to be a food shortage.  I was impressed that I should get a bag of wheat and a grinder for it.  I saw all the 18 wheeler trucks are stopped.

A Warning About The Coming Shortages Of Diesel Fuel, Diesel Exhaust Fluid And Diesel Engine Oil

What I am about to share with you is a developing situation, and I hope to share more once the facts become clearer.  It appears that a very serious diesel crisis is coming in the months ahead, and that will have a dramatic impact on our economy.  As you will see below, we are being warned that there will be shortages of diesel fuel, diesel exhaust fluid and diesel engine oil.  Most diesel vehicles require all three in order to run, and so a serious shortage of any of them would be a major disaster.  Needless to say, simultaneous shortages of all three could potentially be catastrophic.  Most Americans don’t spend much time thinking about diesel, but without it our supply chains collapse and we don’t have a functioning economy.  In a recent Time Magazine article discussing the coming diesel fuel shortage, we are told that “the U.S. economy runs on diesel”…

Though most consumers shake their heads at the cost of gasoline and complain about the cost of filling up their car tanks, what they really should be worried about is the price of diesel. The U.S. economy runs on diesel. It’s what powers the container ships that bring goods from Asia and the trucks that collect goods from the ports and bring them to warehouses and then to your home. The farmers who grow the food you eat put diesel in their tractors to plow the fields, and the workers that bring construction equipment to build your home put diesel in their trucks.

Since January, supplies of diesel fuel have been steadily getting tighter.

As supplies have gotten tighter, prices have skyrocketed.  The average price of a gallon of diesel fuel hit $5.50 a gallon in early May, and it has remained above that level ever since.

One of the biggest reasons for the supply crunch is a serious lack of refining capacity.  Back in 1980, the U.S. had twice as many refineries…

There are also fewer refineries, which process crude oil into diesel and other products, in the U.S. than were just a few years ago. There are just 124 now operating, down from twice as many in 1980, and down from 139 in 2016, according to the U.S. Energy Information Association. The northeast region is particularly spare, with just seven refineries today, down from 27 in 1982.

There have already been some temporary outages of diesel fuel at a few locations around the country, and we are being warned that disruptions are likely to intensify during the summer months.

But the good news is that we aren’t going to run out of diesel fuel.  It may become a lot more expensive, and there may be painful temporary shortages, but we won’t run out of it.

Unfortunately, the crisis that we are facing with diesel exhaust fluid is potentially much more serious.

If you have just been skimming this article, this is the part where you need to start really paying attention.

DEF is a solution made up of urea and de-ionized water that is needed for almost everything that runs on diesel. It reduces harmful gases being released into the atmosphere and works by converting nitrogen oxide produced by diesel engines into nitrogen and steam.

If you have a diesel vehicle that was sold in the United States after 2010, your vehicle could technically run without DEF, but in most cases your vehicle will simply not let you start it if the DEF tank is dry…

Can we call it a DEF jam? Everything is in short supply as supply chains continue to unlink. The latest commodity reportedly hit is DEF, or the blue diesel exhaust fluid that every diesel sold in the U.S. after 2010 needs to cut emissions. This means that every diesel truck, diesel RV, SUV, and car owner will likely have to look harder, and pay more for, DEF. A diesel engine can technically run without DEF, but your diesel vehicle likely won’t let you start it if the DEF tank is empty.

A lack of urea is the biggest reason for the growing shortage of DEF.

The United States is one of the largest importers of urea in the world, and Russia and China are two of the largest exporters.  In previous years that wasn’t a problem, but now the war in Ukraine has dramatically changed things…

A major portion of our urea comes from Europe, and because of the war in Ukraine we’re seeing a shortage of it, according to Newsweek. Russia is one of the world’s major exporters of it. China, too, is a major exporter of it, and it has suspended exports. Weather, too, has caused supply chain disruptions. Since it’s also a major component in fertilizers, there’s intense competition for urea.

Without enough DEF, our economy is going to be in for a world of hurt.

Meanwhile, Mike Adams is reporting on the growing shortages of diesel engine oil that are starting to happen all over the nation…

Retailers, customers and distributors are all reporting shortages in diesel engine oil. This is not an imaginary problem, it is a real problem that is so far entirely ignored by the corporate media.

Apparently there are some diesel engine oil additives that are in extremely short supply, and one industry insider is telling us that this problem isn’t going to be resolved any time soon.

So what this means is that people are going to start running out of diesel engine oil.

In fact, it is already being reported that the trains in Sri Lanka will soon have to completely shut down because of a lack of diesel engine oil…

That’s in line with the warning we’re hearing in the states: About 8 weeks of diesel engine oil remaining in the pipeline.

Just solving one of the shortages that I have described in this article will not be enough.

As I noted in the opening paragraph, a diesel vehicle requires diesel fuel, diesel exhaust fluid and diesel engine oil in order to operate.

You need all three.

This is a story that I will be following very closely.  Needless to say, there are enormous implications for our supply chains and for our economy as a whole if solutions cannot be found.

***It is finally here! Michael’s new book entitled “7 Year Apocalypse” is now available in paperback and for the Kindle on Amazon.***

About the Author: My name is Michael and my brand new book entitled “7 Year Apocalypse” is now available on Amazon.com.  In addition to my new book I have written five other books that are available on Amazon.com including  “Lost Prophecies Of The Future Of America”, “The Beginning Of The End”, “Get Prepared Now”, and “Living A Life That Really Matters”. (#CommissionsEarned)  When you purchase any of these books you help to support the work that I am doing, and one way that you can really help is by sending digital copies as gifts through Amazon to family and friends.  Time is short, and I need help getting these warnings into the hands of as many people as possible.  I have published thousands of articles on The Economic Collapse Blog, End Of The American Dream and The Most Important News, and the articles that I publish on those sites are republished on dozens of other prominent websites all over the globe.  I always freely and happily allow others to republish my articles on their own websites, but I also ask that they include this “About the Author” section with each article.  The material contained in this article is for general information purposes only, and readers should consult licensed professionals before making any legal, business, financial or health decisions.  I encourage you to follow me on social media on Facebook and Twitter, and any way that you can share these articles with others is a great help.  These are such troubled times, and people need hope.  John 3:16 tells us about the hope that God has given us through Jesus Christ: “For God so loved the world, that he gave his only begotten Son, that whosoever believeth in him should not perish, but have everlasting life.”  If you have not already done so, I strongly urge you to ask Jesus to be your Lord and Savior today.