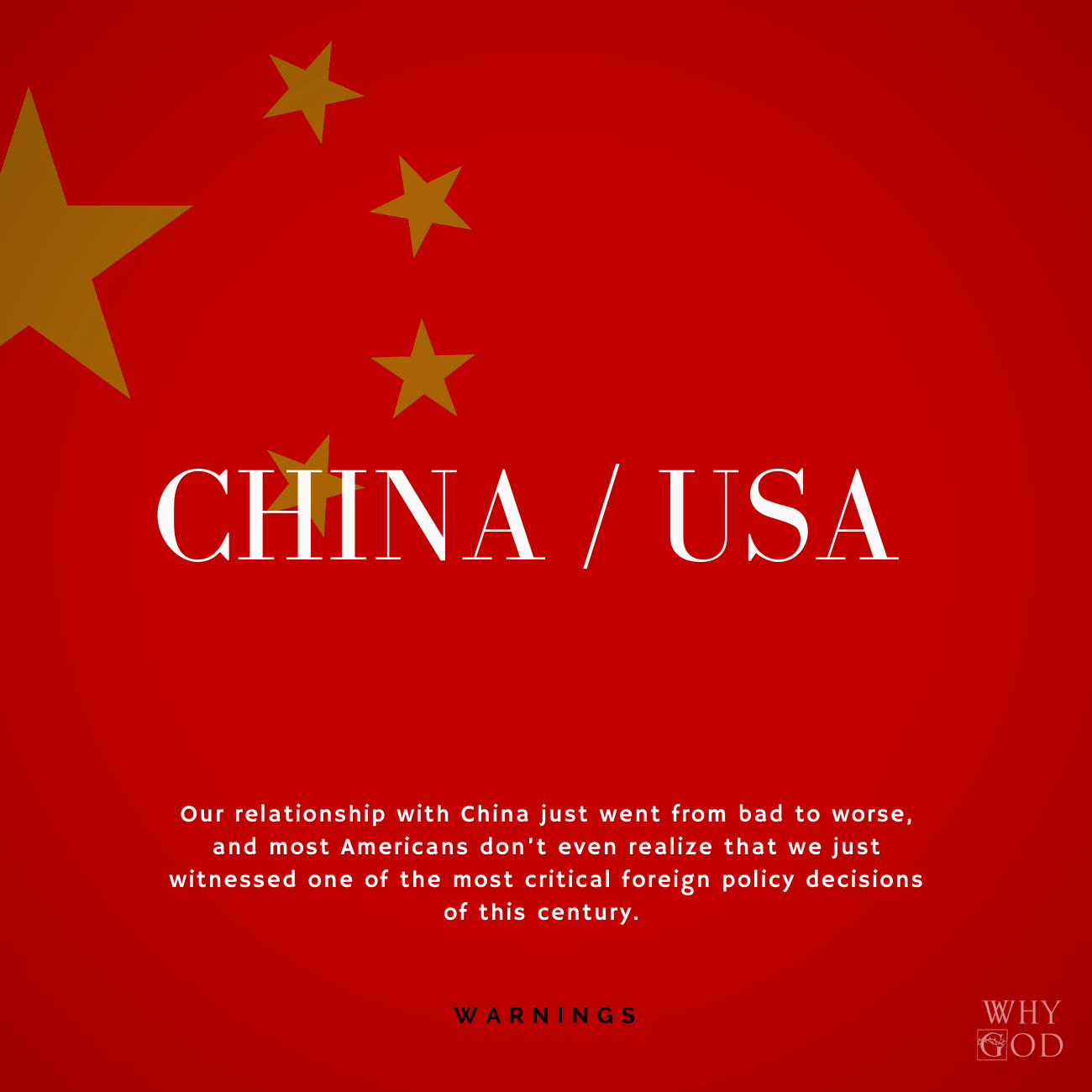 By Michael Snyder – The Most Important News

Our relationship with China just went from bad to worse, and most Americans don’t even realize that we just witnessed one of the most critical foreign policy decisions of this century. The U.S. Senate just unanimously passed the “Hong Kong Human Rights and Democracy Act of 2019”, and the Chinese are absolutely seething with anger. Violent protests have been rocking Hong Kong for months, and the Chinese have repeatedly accused the United States of being behind the protests. Whether that is true or not, the U.S. Senate has openly sided with the protesters by passing this bill, and there is no turning back now.

The protesters in Hong Kong have been waving American flags, singing our national anthem and they have made it exceedingly clear that they want independence from China. And all of us should certainly be able to understand why they would want that, because China is a deeply tyrannical regime. But to the Chinese government, this move by the U.S. Senate is essentially an assault on China itself. They are going to argue that the U.S. is inciting a revolution in Hong Kong, and after what the Senate has just done it will be very difficult to claim that is not true.

The Chinese take matters of internal security very seriously, and the status of Hong Kong is one of those issues that they are super sensitive about. China will never, ever compromise when it comes to Hong Kong, and if the U.S. keeps pushing this issue it could literally take us to the brink of a military conflict.

And you can forget about a comprehensive trade agreement ever happening. Even if a Democrat is elected in 2020, that Democrat is going to back what the Senate just did. That is why it was such a major deal that this bill passed by unanimous consent. It sent a message to the Chinese that Republicans and Democrats are united on this issue and that the next election is not going to change anything.

And the trade deal that President Trump was trying to put together was already on exceedingly shaky ground. “Phase one” was extremely limited, nothing was ever put in writing, and nothing was ever signed. And in recent days it became quite clear that both sides couldn’t even agree about what “phase one” was supposed to cover…

A spokesperson for China’s Commerce Ministry said earlier this month that both countries had agreed to cancel some existing tariffs simultaneously. Trump later said that he had not agreed to scrap the tariffs, lowering hopes for a deal.

“They’d like to have a rollback. I haven’t agreed to anything,” the president said.

On Tuesday, Trump was visibly frustrated by how things are going with China, and he publicly warned the Chinese that he could soon “raise the tariffs even higher”…

President Donald Trump threatened higher tariffs on Chinese goods if that country does not make a deal on trade.

The comments came during a meeting with the president’s Cabinet on Tuesday. The U.S. and China, the world’s two largest economies, have been locked in an apparent stalemate in trade negotiations that have lasted nearly two years.

“If we don’t make a deal with China, I’ll just raise the tariffs even higher,” Trump said in the meeting.

Unfortunately, raising tariffs isn’t going to fix anything at this point.

In fact, Trump can raise tariffs until the cows come home but it isn’t going to cause the Chinese to budge.

That is because on Tuesday evening everything changed.

When they passed the “Hong Kong Human Rights and Democracy Act of 2019” by unanimous consent, the U.S. Senate essentially doused our relationship with China with kerosene and set it on fire. The following comes from Zero Hedge…

In a widely anticipated move, just after 6pm ET on Tuesday, the Senate unanimously passed a bipartisan bill, S.1838, showing support for pro-democracy protesters in Hong Kong by requiring an annual review of whether the city is sufficiently autonomous from Beijing to justify its special trading status. In doing so, the Senate has delivered a warning to China against a violent suppression of the demonstrations, a stark contrast to President Donald Trump’s near-silence on the issue, the result of a behind the scenes agreement whereby China would allow the S&P to rise indefinitely as long as Trump kept his mouth shut.

As we reported last week, the vote marks the most aggressively diplomatic challenge to the government in Beijing just as the US and China seek to close the “Phase 1” of their agreement to end their trade war. The Senate measure would require annual reviews of Hong Kong’s special status under U.S. law to assess the extent to which China has chipped away the city’s autonomy; in light of recent events, Hong Kong would not pass. It’s unclear what would happen next.

I am finding it difficult to find the words to describe what this means to the Chinese.

We have deeply insulted their national honor, and our relationship with them will never be the same again.

Many will debate whether standing up to China on this issue was the right thing to do, but in this article I am trying to get you to understand that there will be severe consequences for what the U.S. Senate just did.

There isn’t going to be a comprehensive trade deal, the global economy is going to suffer greatly, and the Chinese now consider us to be their primary global adversary.

Shortly after the Senate passed the bill, a strongly worded statement was released by the Chinese government. The following excerpt comes from the first two paragraphs of that statement…

On November 19th, the US Senate passed the “Hong Kong Bill of Rights on Human Rights and Democracy.” The bill disregards the facts, confuses right and wrong, violates the axioms, plays with double standards, openly intervenes in Hong Kong affairs, interferes in China’s internal affairs, and seriously violates the basic norms of international law and international relations. The Chinese side strongly condemns and resolutely opposes this.

In the past five months, the persistent violent criminal acts in Hong Kong have seriously jeopardized the safety of the public’s life and property, seriously trampled on the rule of law and social order, seriously undermined Hong Kong’s prosperity and stability, and seriously challenged the bottom line of the “one country, two systems” principle. At present, what Hong Kong faces is not the so-called human rights and democracy issues, but the issue of ending the storms, maintaining the rule of law and restoring order as soon as possible. The Chinese central government will continue to firmly support the Hong Kong SAR Government in its administration of the law, firmly support the Hong Kong police in law enforcement, and firmly support the Hong Kong Judiciary in punishing violent criminals in accordance with the law, protecting the lives and property of Hong Kong residents and maintaining Hong Kong’s prosperity and stability.

For a long time I have been warning that U.S. relations with China would greatly deteriorate, and this is the biggest blow that we have seen yet.

The U.S. and China are now enemies, and ultimately that is going to result in a tremendous amount of pain for the entire planet.

About the Author: I am a voice crying out for change in a society that generally seems content to stay asleep. My name is Michael Snyder and I am the publisher of The Economic Collapse Blog, End Of The American Dream and The Most Important News, and the articles that I publish on those sites are republished on dozens of other prominent websites all over the globe. I have written four books that are available on Amazon.com including The Beginning Of The End, Get Prepared Now, and Living A Life That Really Matters. (#CommissionsEarned) By purchasing those books you help to support my work. I always freely and happily allow others to republish my articles on their own websites, but due to government regulations I need those that republish my articles to include this “About the Author” section with each article. In order to comply with those government regulations, I need to tell you that the controversial opinions in this article are mine alone and do not necessarily reflect the views of the websites where my work is republished. This article may contain opinions on political matters, but it is not intended to promote the candidacy of any particular political candidate. The material contained in this article is for general information purposes only, and readers should consult licensed professionals before making any legal, business, financial or health decisions. Those responding to this article by making comments are solely responsible for their viewpoints, and those viewpoints do not necessarily represent the viewpoints of Michael Snyder or the operators of the websites where my work is republished. I encourage you to follow me on social media on Facebook and Twitter, and any way that you can share these articles with others is a great help.

President of China Xi Jinping awarded the Order of Friendship of the People’s Republic of China to Vladimir Putin. The President of Russia is the first foreign leader to be awarded this high national order of China.