I have a Bible study every Saturday (Sabbath) with family members and every so often I pray and ask the Lord if He would show me new things in His word (Jer. 33:3) and to understand it (Pro. 1:23); and He does!

One thing that I have noticed is that God loves to leave us clues in His word and provides patterns in history for those willing to search. For me it is almost like using a spiritual metal-detector to discover His hidden treasure or hidden manna!

While preparing for a short study on the Menorah, I noticed how many things about the Menorah relate to the Bible. One example is there are 66 ornaments on the Menorah and 66 books in the Bible. So I put together a simple diagram to share with others

After this I began to think about and research the Temple of God.

So, I thought to myself, this is pretty cool, I cannot believe that God has not left us any clues concerning the timing of the third Temple; there has to be something, so I asked the Holy Spirit for His help and He did not disappoint me! He directed me to add up all the numbers and dates and as you can see, they all point to a small window in time: 2017 – 2018!

When I saw that Israel would have been without a Temple for approximately 2,017 or 2,018 years this year (2017), I had three witnesses to this date: The Jubilee, the Fig Tree Generation and the third Temple!

Please keep in mind that I am an ex-police officer and detective; so for me the investigation is fun, but the math and adding dates – not so much! (all dates are approximate)

Until next time – God be with you!

Your brother in Christ Kevin Trimbath 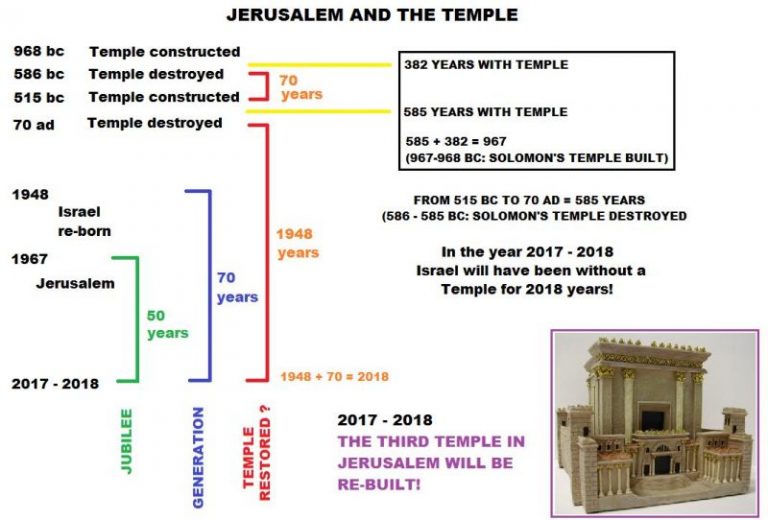 Pictures Of The Third Temple Displayed By Google Maps

–70 is a prophetic number. Daniel the prophet spoke of 70 sevens that must be fulfilled in order for redemption to come. Jeremiah the prophet spoke of 70 years of judgment in which Israel would be enslaved to Babylon. The enslavement, by the way, occurred because Israel did not keep the statutes of the Jubilee. The noble class would not let the serfs go free. Therefore the nobles were enslaved to their worst enemy, Babylon. God Like Productions