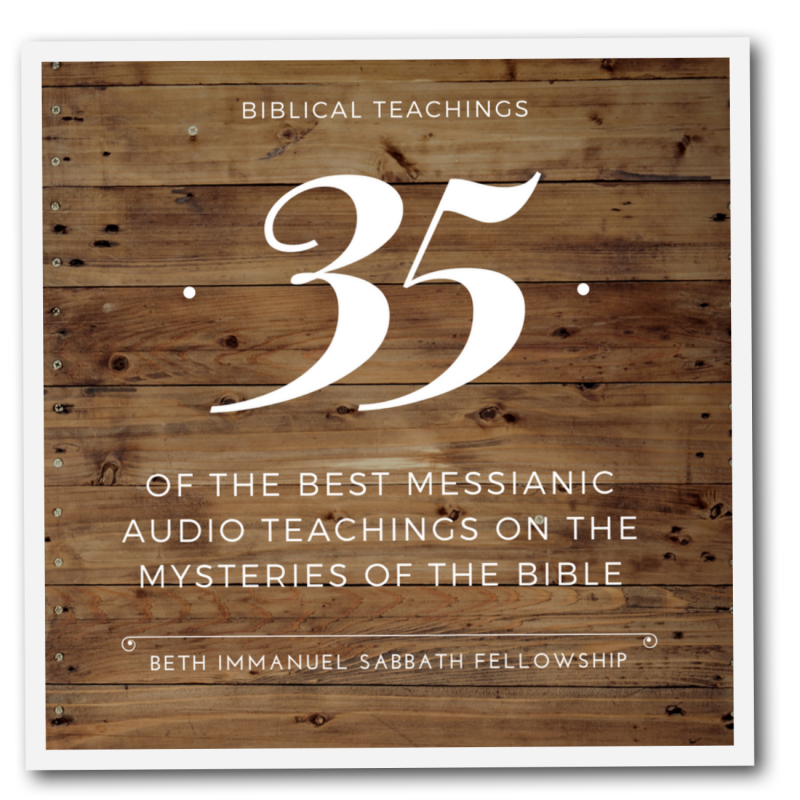 “motivatedinohio -Not sure if you guys are Messianic Believers or not, but here is the best series of sermons on it, from a Messianic Jewish Perspective, that I have ever heard. bethimmanuel.org/“

Beth Immanuel Sabbath Fellowship is a family-based, Messianic community in Hudson, Wisconsin, committed to following Jesus of Nazareth, trusting in Him for salvation, and teaching Messianic Judaism for all nations. Messianic Judaism is the practice of Judaism in the light and revelation of the New Testament, and, as such, it is the oldest form of Christianity.

1 Apocalypse of Messiah Recorded 10/08/2015- According to the first three verses of the book of Revelation, God delivered an ‘unveiling” of concealed things to his Son Yeshua. He, in turn, revealed it to his angel who revealed it to John to reveal to Yeshua’s bondservants. Apocalypse of Messiah, the first teaching in the series on the book of Revelation, introduces us to the apocalyptic genre of literature in order to provide context for the book.

2Boiled in Oil Recorded 10/14/2015 Why was John on the Island of Patmos? The tribulation was already underway in 95 AD. This teaching tells the story behind the book of Revelation from Roman histories, Church legend, and the Chronicles of the Apostles. The story of the Domitian persecution provides clues to unlock the meaning of the book of Revelation.

4  Angelic Encounters Recorded 10/28/2015 Have you ever seen an angel? The apostle John encountered a frightening heavenly being on the Island of Patmos, but its not exactly clear if this was Yeshua or an angel speaking in Yeshua’s name. Get to the bottom of the mystery of the Angel of Yeshua. This teaching compares the opening formulas of other pieces of Jewish apocalypse including the appearances of Gabriel in the book of Daniel.

6 A Lamp in Ephesus Recorded 12/09/2015 The book of Revelation begins with seven epistles to seven churches. In this teaching, we work through Revelation 2:1-7, explaining the context and deriving practical applications from Yeshua’s message to the assembly at Ephesus.

7 Deeds of the Nicolaitans Recorded 12/30/2015 Who were the mysterious Nicolaitans mentioned in the second chapter of Revelation? Why did Yeshua specifically condemn that particular sect? What did they teach and how did they begin? How do we know if we are Nicolaitans or not?  In this teaching from the Apoclypse of John, we follow the clues to unlock the mystery behind this obscure abberation on early Christianity

8 Synagogue of Satan Recorded 01/07/2016 Yeshua rebuked those who claim to be Jews but are not Jews, and he makes reference to the “synagogue of Satan.” Who are “those who say they are Jews and are not Jews” who worship in a “synagogue of Satan”?  How do you know if you might not be one yourself? In this teaching, Pastor Lancaster presents an abbreviated version of his article “Synagogue of Satan,” an article that appeared in Messiah Journal 113 and is to be included in the appendices of the forthcoming casebound edition of Torah Club: Chronicles of the Apostles.

9 Satan’s Throne Recorded 01/20/2016 The city of Pergamum was one of the most famous places in the Roman world. In addition to a spas, hospitals, and a healing center there, the city boasted an enormous altar to the god Zeus. The story of Satan’s throne in Pergamum and the martyr Antipas has a frightening corrolary in the modern world. Listen to a teaching on Revelation 2:13 to discover the meaning behind these cryptic references

11 Jezebel Spirit Recorded 02/03/2016 Revelation chapter two and the epistle to the assembly at Thyatira warns about a mysterious prophetess called Jezebel. Who is Jezebel of Thyatira, and what are the deep things of Satan which she taught? What does it mean to have a “Jezebel Spirit”? This teaching goes into the details of the Master’s epistle to Thyatira, revealing a fascinating correlation to the Apostolic Decree in Acts 15.

12 Thief in the Night Recorded 02/11/2016 What does it mean that Yeshua comes as a “thief in the night”? The assembly of disciples in Sardis had a false reputation for being alive. The angel of Yeshua warned them to wake up or face the unwelcome and unanticipated visit of the thief in the night. This teaching explores Revelation 3:1-6 with emphasis on piety and connection to God in the practice of our faith.

13 Key of David Recorded 02/17/2016 Our Master Yeshua possesses the mysterious key of David, but what does the key of David unlock? This teaching about the message to the assembly at Philadelphia opens new doors of understanding and includes a glimpse of the prophetic new name for the city of Jerusalem and a new name for Messiah.

14 Stand at the Door and Knock Recorded 02/24/2016 “Since you are neither hot nor cold, but lukewarm, I will spew you out of my mouth!” What does it mean to be neither cold nor hot? This teaching on the assembly at Laodicea contains several suprises including unscheduled visits to Proverbs 8 and Song of Songs. Find out what it means that Yeshua stands at the door and knocks. This discussion concludes the teachings on the seven epistles to the seven angels of the seven assemblies.

What are the four living creatures around the throne of glory? What is the meaning of the face of the lion, the ox, the eagle, and the man? Take a peek behind the veil at the throne of glory and the worship of the Almighty in Revelation 4. This teaching on the heavenly temple reveals the connection between the heavenly worship service and the kedushah prayer in the synagogue liturgy today: Holy, Holy, Holy is the Lord of Hosts

17 Plagues of Egypt Recorded 04/22/2016 The plagues on Egypt foreshadow a future coming time of tribulation when God will judge the whole earth, as he once judged Egypt. This time, judgment comes on all the nations, as God redeems his people from the nations. Just as the redemption from Egypt began with plagues, judgments, signs and wonders on the earth, likewise, the final redemption will be prefaced by the same types of omens, calamities, and judgments, which Christians refer to as “the tribulation” and Jews refer to as the “Birth Pains of Messiah,” leading up to the conflict of Armageddon, the great war of Gog and Magog.

18 The Four Horsemen Recorded 04/28/2016 Have the four horsemen of the apocalypse already begun to ride through the earth? Who are the mysterious riders? Discover the identity of the rider on the white horse, and learn to listen for the approaching hoofbeats–the footsteps of Messiah.

19The Mark of the LORD Recorded 05/11/2016 The fifth seal opens and John sees the souls of those martyred “under the altar.” The sixth seal is opened and “the sun became black as sackcloth, the full moon became like blood” (Revelation 6:12). With the sixth seal, the tribulation on the nations begins, but not before an angel marks 144,000 from Israel. Discover the meaning behind the mark with which the angel seals the 144,000.

20 The 144,000 Recorded 05/18/2016 Who are the 144,000 “servants of the Lord” in the book of Revelation, and what is their role? In the exciting season finale of the Apocalypse of John, we follow the story up to the brink of the opening of the seventh seal. This teaching focuses on a discusion of the 12,000 sealed from each of the twelve tribes of Israel.

21 Vision for a Time of Tribulation Recorded 09/07/2016 Are you ready for the coming tribulation? It’s already here, and it has been underway for the last two thousand years. The four horsemen of the apocalypse have already ridden out; five of the seven seals on the scroll with seven seals have already been opened, and we are just about to see the opening of the sixth seal. Take a quick look at the first seven chapters of Revelation with this  season one recap of the Apocalypse of John.

22 Seven Trumpets Recorded 09/14/2016 When the seventh seal on the scroll is broken, heaven falls silent for half an hour. The prayers of the martyrs rise before God like incense. Seven angels take up seven trumpets, and with each blast of the trumpet, a new calamity falls upon the inhabitants of the earth. This teaching from the book of Revelation takes us through the first four trumpet blasts–a prelude to the three woes.

23 Abaddon and Apollyon Recorded 09/21/2016 A fifth trumpet sounds. A star falls to earth. The star is given a key to unlock the abyss. (Not a good idea.) A sixth trumpet releases the four angels bound at the Euphrates. In this teaching from Revelation 9, we learn about who is in the abyss and we meet the hosts of Abaddon.

24 Secret of the Seven Thunders Recorded 09/28/2016 John sees an angel straddling land and sea with the small scroll open in his hand. He hears the voices of seven thunders speak to him from heaven. He eats a scroll that tastes like honey but turns his stomach sour. In this teaching, we unravel these riddles and more as we prepare for the seventh angel to sound the seventh trumpet.

25 25 Times of the Gentiles Recorded 10/26/2016 What is the “time of the Gentiles” and how long does it last. This teaching on Revelation 11:1-2 provides the background for the command to “rise and measure the temple” and insights into the trampling of the holy city.

26The Two Witnesses Recorded 11/16/2016 Who are the two witnesses of Revelation 11? What is their function in the end times? This intriguing teaching brings material from ancient Jewish apocalypses to uncover the identity of the two witnesses and their mission.

27 The Seventh Trumpet Recorded 12/07/2016 The seventh trumpet blows, signaling the big event when the day of wrath collides with the rage of nations. The temple on earth opens and the ark of the covenant is revealed. The kingdom of this world becomes the kingdom of Hashem and his Messiah. In this study of Revelation 11:14-19, the seventh trumpet blast initiates a process whereby the kingdom will be established.

29 War in Heaven Recorded 12/14/2016 The vision of Revelation 12 involving a woman pursued by a seven-headed red dragon has inspired many different interpretations, but how would a first-century Jewish reader have understood the vision? Where is the place in the wilderness prepared for the woman? What is the flood that pours forth from the dragon’s mouth? This teaching places Revelation 12 back in its context, explaining the symbolism.

30 The Beast from the Sea Recorded 12/21/2016 The Book of Revelation depicts a terrifying beast rising out of the sea. The whole world goes astray after the beast, worshipping it and asking, “Who is like the Beast?” Who is the Beast? What do the seven heads, ten horns, and diadems represent? This teaching makes the connection between Daniel’s vision of four beasts and the Beast that rises out of the sea.

32 Name of the Beast Recorded 01/22/2017 The mysterious number 666 is code for the name of a human being considered to be the antichrist and endtimes incarnation of evil. Can we crack the code? This teaching takes a look at the puzzle from a first-century perspective to offer an answer to the old question, “What is the name of the beast?”

33 33 Blood to the Horse’s Bridle Recorded 01/18/2017 In the way of encouragement for those who must sacrifice their lives rather than accept the mark of the beast or worship his image, the Apocalypse of John grants a glimpse of the final redemption, the coming of the Messiah, the Lamb on Mount Zion with the 144,000, and the defeat of Gog and Magog.

34 Song of the Lamb Recorded 01/25/2017 A majestic prelude to the final act of the redemption comes with a heavenly recitation of the Song of Moses and the Song of the Lamb. We see the seven angels preparing to pour out seven bowls of God’s wrath upon the earth while the heavenly spirits of the martyrs take their places in the supernal temple to provide a choral accompaniment for soundtrack of the final redemption.