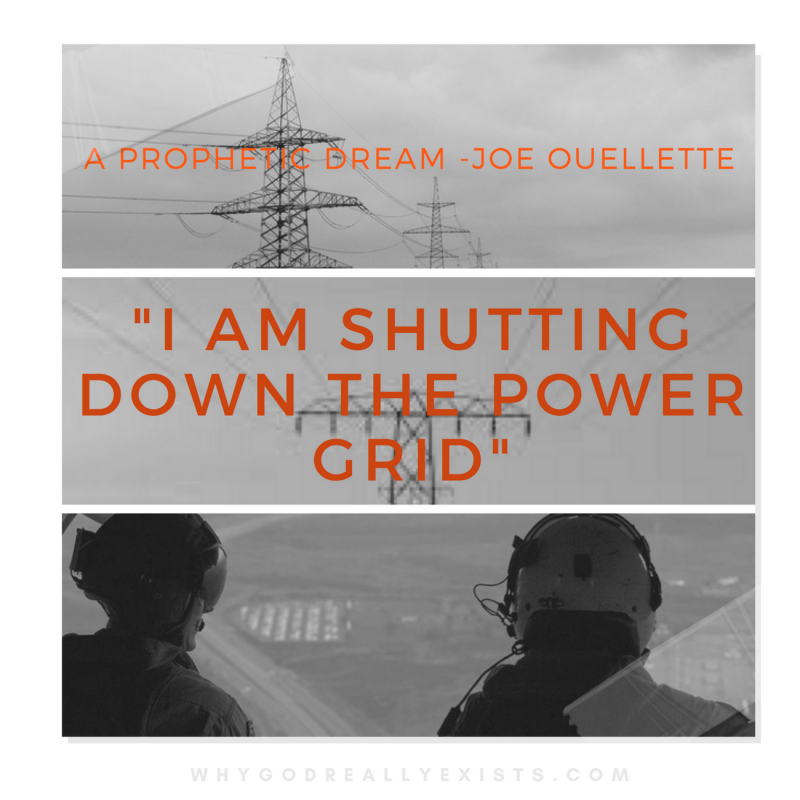 I dreamt I was looking at a map of the USA and started to sing a song that I knew was a prophecy. I can’t remember all the words but it went something like this.

“They call themselves a Christian nation, but their hearts are bent on war. They kill they’re own brothers, all in the name of God. I am coming against these wicked people that call themselves sons of God. I will slaughter every one of them and show the world my hand. Only a remnant will be left standing, those that hate the wickedness in that wicked land.”

When I awoke God spoke to me and said “I am coming against this wicked nation only a remnant will be left” I then saw a vision and the USA was now about the size of Italy. He then went on to say “I am shutting down the grid”

So you were dreaming about a map, then in the dream you were singing a prophetic song. Then when you woke up, you got a word from God, and THEN a vision from Him?

There is no doubt that there will be an emp some day. I have read many prophecies that this will happen. Though I wanted to get your opinions on the size of the United States that you saw. Was it the physical mass the size of Italy, or do you think the remnant was the size of Italy? I have looked at some other maps, and have seen the coastlines disappear, Florida, the new madrid cut out in the center, and then usually a gigantic whole of water around the Utah area, but they tend to change from map to map. Do you have some more details about this?

(Joe, I am going to be putting this question and your answer in my post…. as I think many people would want to know more about this)

Gosh, what an encounter!!!

LOL I often type these out at 3am when I have the dream. Mistakes are made. The rest of the US was taken over by other nations like Russia and China. The part that was still under the US flag looked like about 1/8th of the current land mass and its shaped reminded me of italy. I assumed it would be a solar disruption from the sun that takes out the grid. Only thing is it could also happen shortly as to usher in Martial law which I have also dreamed about. This would fulfill the prophecy of Obama being the last president as this would cancel the election. It also could be man made to ensure no one gets in.
Joe

I am about to publish the prophecy you had about the last president.

Though with the timing, you are just making speculations about it happening soon. It could happen later in the time line as well. I thought the detail about the land mass that was seen was under the flag. Do you remember any other details?

Definitely speculation. LOL I cant think of anything except I had a feeling this whole thing happened over years.
I had the dream in 2013

“The rest of the US was taken over by other nations like Russia and China. The part that was still under the US flag looked like about 1/8th of the current land mass and its shaped reminded me of italy”

So, I wonder, this may not be about land disappearing…..  as I would likely assume, but maybe occupation?  Foreign occupation?  It could very well mean a number of things.  The detail about Russia and China, and what was LEFT under the flag I think are the keys to this dream

It was about a takeover after the war.