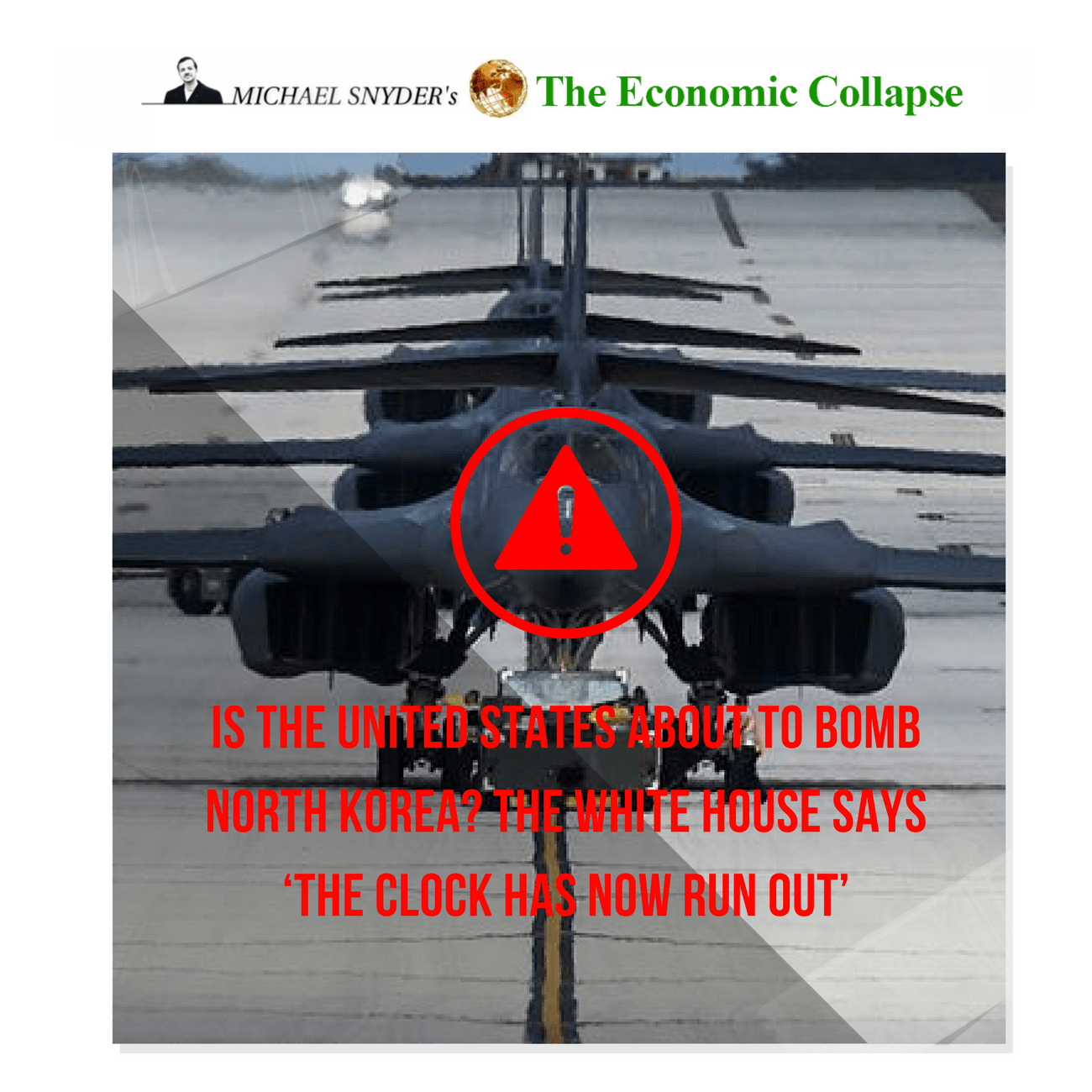 I got chills when I saw a CNN report that said that a White House official has just warned that “the clock has now run out” on North Korea’s nuclear program and that “all options are on the table”. That second phrase has been repeatedly used by members of the Trump administration in recent days, and everyone knows what it means. When I wrote that a conflict with North Korea could be “Trump’s first war” last month, I was still hoping that cooler heads would prevail and that a military conflict could be avoided. Unfortunately, it appears that a peaceful solution is not in the cards, and that means that the United States may soon start bombing North Korea. And of course if that happens the North Koreans will strike back with whatever they can, and that includes nuclear weapons.

I don’t know if I have the words to effectively communicate how serious this situation could become. We have gotten to the point where the White House is openly talking of going to war with a nuclear power…

A senior White House official issued a dire warning to reporters Tuesday on the state of North Korea’s nuclear program, declaring “the clock has now run out and all options are on the table.”

“The clock has now run out, and all options are on the table,” the official said, pointing to the failure of successive administration’s efforts to negotiate an end to North Korea’s nuclear program.

Later this week, President Trump is going to meet with Chinese President Xi Jinping in Florida. The eyes of the entire world will be on this summit, because everyone knows that Trump is going to press the Chinese leader for help on resolving the crisis with North Korea.

But what can China actually do?

The Chinese could cut off trade with North Korea, and that would definitely hurt, but North Korean leader Kim Jong Un appears to have become convinced that long range nuclear missiles are the key to the survival of his regime, and so he will never give up his nuclear program.

And the Chinese will certainly not strike North Korea militarily, and so ultimately if something is going to be done to stop North Korea from getting long range nuclear missiles it will be up to the United States.

On Tuesday morning, North Korea once again showed their defiance by firing yet another test missile into the Sea of Japan…

The missile was fired from the Sinpo region at 10.40pm GMT (6.10am local time) on the communist nation’s east coast and landed into the sea off the Korean peninsula, South Korean military officials confirmed.

The rocket is believed to have flown around 37 miles before crashing into the sea. Specific details about the type of projectile were not immediately available.

Kim Jong Un conducted more missile tests in 2016 than his father did in nearly two decades.

It has become crystal clear that North Korea is not going to back down.

President Trump is still hoping that China will step up to the plate, but if the Chinese don’t he has already stated that the United States is fully prepared to “act alone”. In fact, he made headlines all over the planet when he told the Financial Times the following: “Well if China is not going to solve North Korea, we will. That is all I am telling you.”

It doesn’t take much imagination to figure out what Trump is saying there.

Previous administrations have tried sanctions and negotiations for decades, and they all failed.

In the end, Trump is going to be faced with a choice whether to bomb North Korea or not, and four-star general Jack Keane says that bombing North Korea “may be the only option left”…

A four-star general with close ties to Donald Trump has warned that military strikes are ‘rapidly’ becoming the only solution to North Korea’s nuclear program.

But bombing North Korea is not like bombing Afghanistan, Iraq, Libya or Syria.

The North Koreans already have nuclear weapons, and the U.S. better destroy them all in an overwhelming initial assault, because Kim Jong Un will use any that survive to strike back.

A senior North Korean defector has told NBC News that the country’s “desperate” dictator is prepared to use nuclear weapons to strike the United States and its allies.

Thae Yong Ho is the most high profile North Korean defector in two decades, meaning he is able to give a rare insight into the secretive, authoritarian regime.

According to Thae, North Korean dictator Kim Jong Un is “desperate in maintaining his rule by relying on his [development of] nuclear weapons and ICBM.” He was using an acronym for intercontinental ballistic missiles — a long range rocket that in theory would be capable of hitting the U.S.

North Korea is currently developing an intercontinental ballistic missile known as the “Taepodong 2” that will have a range of approximately 8000 kilometers.

In other words, it would be capable of striking cities in the western portion of the United States.

It is unthinkable that we would allow a tyrannical leader that is literally insane and that is obsessed with destroying the United States to have such a weapon.

But the moment that we start dropping bombs on North Korea we will start a war in which millions could die. Whatever nuclear weapons are missed in the first assault will likely be fired at U.S. military bases in Japan or at South Korea’s capital city of Seoul. Approximately 10 million people live in Seoul, so the death toll would be absolutely enormous. And even if all North Korean nuclear devices are destroyed by the first attack, the North Koreans still have thousands of artillery guns and rocket launchers trained on Seoul, and they would not hesitate to use their vast stockpile of chemical warheads.

After the initial North Korean barrage, the fourth largest military on the entire planet would start pouring across the border in a massive invasion of South Korea. The U.S. military would be forced to respond with large scale ground forces if South Korea would have any chance of surviving, and just like in the first Korean War the Chinese may decide to respond to that move by committing their own troops to the war on the side of North Korea.

This is a season of “wars and rumors of wars”, and most Americans have no idea how dangerously close we are to the beginning of World War III. My hope is that a peaceful way out of this crisis can still be found, but at this point that is becoming increasingly difficult to imagine.

If Donald Trump decides to go to war with North Korea, he needs to hit them with an absolutely overwhelming first strike that takes out every single North Korean nuke, the bulk of North Korea’s artillery and rockets, and the entire North Korean leadership team within the first few minutes of the attack.

It is hard to imagine a scenario that does not involve nukes that would accomplish that.

And Donald Trump better get the public approval of South Korean and Japanese leadership before ever attempting such an attack, because they will likely pay the highest price if North Korea is able to strike back.

If South Korea or Japan balk at backing such an operation and then they get hit by North Korean nukes, the United States could lose them as friends and allies forever.

The stakes are incredibly high, and there are so many things that could go wrong.

So let us pray for peace, because the alternative is almost too horrible to imagine.