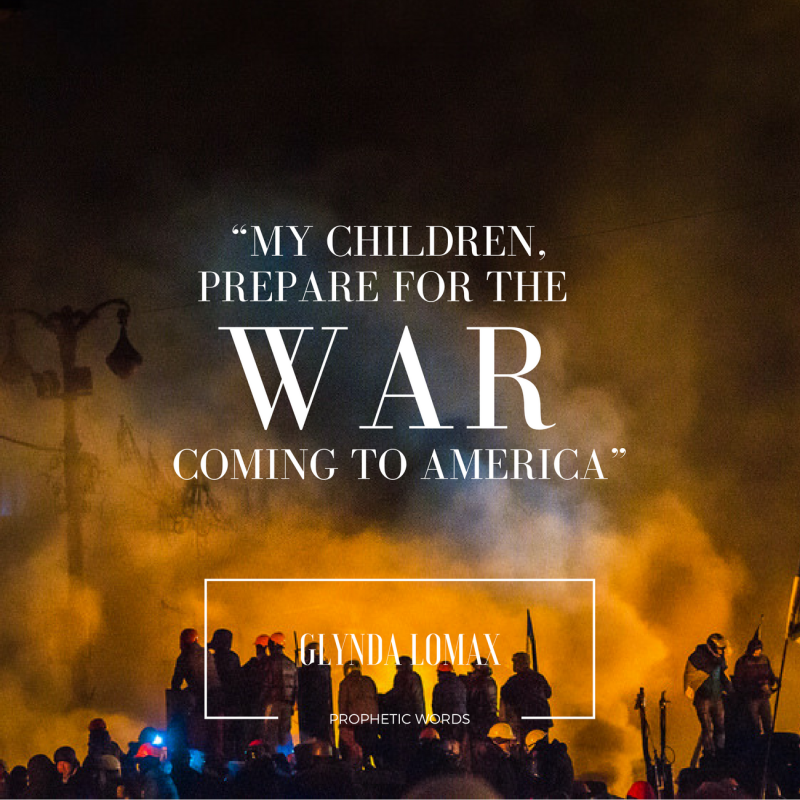 My children, prepare for the war that is coming to America. This will not be a war fought in other countries, but a war fought in your own streets. You will see many you know die before your eyes.

There is dissension brewing in the heart of America, and it will soon boil over. America, though greeted by smiles, also has many enemies. The combination of the two shall be her downfall.

My people are not ready for war, for they hesitate even at using the weapons I have left them in My Word. They are a people faint of heart, unaccustomed to seeing bloodshed, and not courageous for battle.

My people, do you not know I am a God of War? Do you not know I am coming back for the final battle against all evil? Why then do you shy away from the battle before you? Why are My churches filled with smiling imposters, who cannot even face their own sins? How do you plan to survive what is on its way to you? Do you think courage shall suddenly overtake you and you will be filled with faith?

My servant David did not learn faith and courage from doing nothing, but from battling the enemies he met on the way to where he was going. First the lion, then the bear, then the armies who came against Israel.

13 Enter ye in at the strait gate: for wide is the gate, and broad is the way, that leadeth to destruction, and many there be which go in thereat: (Matthew 7:13)

21 When a strong man armed keepeth his palace, his goods are in peace:
22 But when a stronger than he shall come upon him, and overcome him, he taketh from him all his armour wherein he trusted, and divideth his spoils.
23 He that is not with me is against me: and he that gathereth not with me scattereth. (Luke 11:21-23)

6 Be strong and of a good courage, fear not, nor be afraid of them: for the Lord thy God, he it is that doth go with thee; he will not fail thee, nor forsake thee. (Deuteronomy 31:6)

The Lord began giving Glynda Lomax prophetic words and visions when she was in her twenties. She began to have visions and dream visions, which at that time related to her personal life, but it was not until 1996 that she truly got into an intimate walk with Him. In 1997, she began to receive very vivid open visions as well as dream visions and prophetic words. In early 2008, the open visions came with a new intensity, so powerful that she would feel as if a wall of wind had hit her as the visions opened up before her. In December of 2008, the Lord began to show her end times visions. Just before 2011 began, He gave her several consecutive words in a short period of time for His people. She inquired of Him about receiving so many words in such a short time and He sent her a word the next day through a prophet that He is going to pour out His Spirit. That night He spoke to her to begin a blog to release them to His people, which is when she started Wings of Prophecy.

© 2017, Z3 News. All rights reserved. This content may be freely reproduced in full or in part online, email, or other digital formats but only with full attribution to the author, a clickable link to http://Z3news.com, and no changes to the title or body of the article. For permission to reproduce this content in other media formats please contact us.

“My People Will See the Invisible Realm” August 25, 2016 By Glynda Lomax

“A Plan is Underway to Surprise You With an Attack That Will Shock the World”
July 26, 2016 By Glynda Lomax

My People Are Poised for a New Beginning-April 17, 2016 By Glynda Lomax

The Coming Storm is One of Great Spiritual Darkness October 27, 2015 8:20 pm By Glynda Lomax