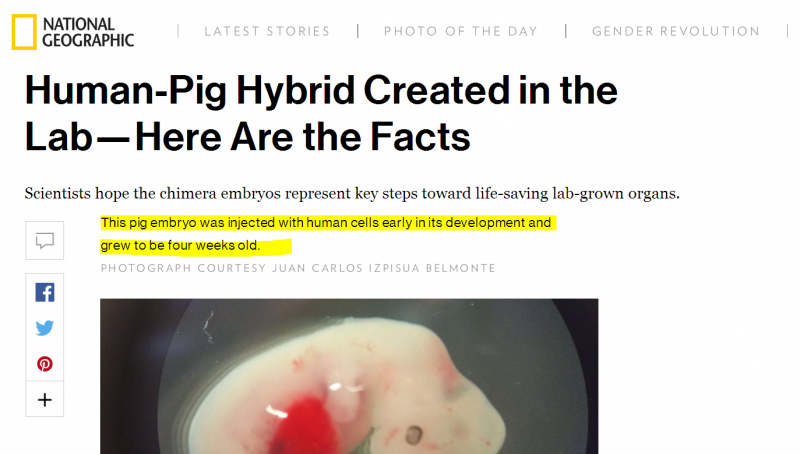 (Meranda’s note- I doubt this is the first human-animal hybrid.  There are a lot of labs that have been testing this for some time.  We are at the same point when God judged those in Noah’s time for doing the exact same thing.  Notice in the article they underline in yellow the positives to this research.  These groups are a lot more advanced than they admit.  These public articles just are meant to warm the public up to the idea to accept it)

In a remarkable—if likely controversial—feat, scientists announced today that they have created the first successful human-animal hybrids. The project proves that human cells can be introduced into a non-human organism, survive, and even grow inside a host animal, in this case, pigs.

Public opinion, too, has hampered the creation of organisms that are part human, part animal.

But for lead study author Jun Wu of the Salk Institute, we need only look to mythical chimeras—like the human-bird hybrids we know as angels—for a different perspective.

“In ancient civilizations, chimeras were associated with God,” he says, and our ancestors thought “the chimeric form can guard humans.” In a sense, that’s what the team hopes human-animal hybrids will one day do.

Genesis 6:1-22 – And it came to pass, when men began to multiply on the face of the earth, and daughters were born unto them,

Genesis 6:1-4 – And it came to pass, when men began to multiply on the face of the earth, and daughters were born unto them,

Genesis 6:1-8 – And it came to pass, when men began to multiply on the face of the earth, and daughters were born unto them,

Numbers 13:30-33 – And Caleb stilled the people before Moses, and said, Let us go up at once, and possess it; for we are well able to overcome it.

Genesis 6:1-7 – And it came to pass, when men began to multiply on the face of the earth, and daughters were born unto them,

Jude 1:6-7 – And the angels which kept not their first estate, but left their own habitation, he hath reserved in everlasting chains under darkness unto the judgment of the great day.

2 Samuel 21:20 – And there was yet a battle in Gath, where was a man of [great] stature, that had on every hand six fingers, and on every foot six toes, four and twenty in number; and he also was born to the giant.

Deuteronomy 3:11 – For only Og king of Bashan remained of the remnant of giants; behold, his bedstead [was] a bedstead of iron; [is] it not in Rabbath of the children of Ammon? nine cubits [was] the length thereof, and four cubits the breadth of it, after the cubit of a man.

Genesis 6:2 – That the sons of God saw the daughters of men that they [were] fair; and they took them wives of all which they chose.

2 Samuel 21:16 – And Ishbibenob, which [was] of the sons of the giant, the weight of whose spear [weighed] three hundred [shekels] of brass in weight, he being girded with a new [sword], thought to have slain David.

Job 1:6 – Now there was a day when the sons of God came to present themselves before the LORD, and Satan came also among them.

Amos 2:9 – Yet destroyed I the Amorite before them, whose height [was] like the height of the cedars, and he [was] strong as the oaks; yet I destroyed his fruit from above, and his roots from beneath.

Genesis 6:1-2 – And it came to pass, when men began to multiply on the face of the earth, and daughters were born unto them, (Read More…)

Joshua 14:15 – And the name of Hebron before [was] Kirjatharba; [which Arba was] a great man among the Anakims. And the land had rest from war.

1 Corinthians 15:38-39 ESV / But God gives it a body as he has chosen, and to each kind of seed its own body. For not all flesh is the same, but there is one kind for humans, another for animals, another for birds, and another for fish.

Romans 1:22-23 Claiming to be wise, they became fools, and exchanged the glory of the immortal God for images resembling mortal man and birds and animals and creeping things.

Psalm 139:13-16 ESVFor you formed my inward parts; you knitted me together in my mother’s womb. I praise you, for I am fearfully and wonderfully made. Wonderful are your works; my soul knows it very well. My frame was not hidden from you, when I was being made in secret, intricately woven in the depths of the earth. Your eyes saw my unformed substance; in your book were written, every one of them, the days that were formed for me, when as yet there was none of them.

Genesis 1:26-27 Then God said, “Let us make man in our image, after our likeness. And let them have dominion over the fish of the sea and over the birds of the heavens and over the livestock and over all the earth and over every creeping thing that creeps on the earth.” So God created man in his own image, in the image of God he created him; male and female he created them.