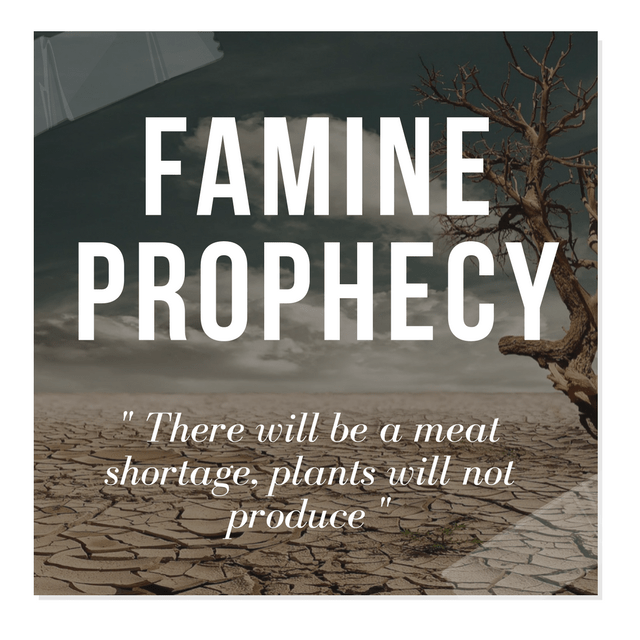 I left a comment here a while back when I received this vivid vision from the Lord on 1/20/17. I do get dreams and words/sentences from the Holy Spirit. However, this was full narration of what I was seeing, which I have never experienced before.

I was standing in a forest and I saw animals fighting to survive, specifically deer. The Lord’s voice spoke and said “A great Famine is coming, Animals would die off and there will be a meat shortage, plants will not produce.”

Then, I was standing in front of my daughters school where the cafeteria line is. I saw students walking with their trays and I specifically remember seeing popcorn on the trays. They were being chaperoned by adults back to their classroom.

The Lord said, “When this happens there will be much fear in the school systems. There will be rules made that kids will not be able to share or touch any other students’ food.” I knew these rules where made to prevent bullying towards children who had desirable lunches.

And parents were concerned about their child’s food security at school. I saw children eating independently without conversing with other students. Then the Lord said, “But, in Great Britain they will do things differently.” I saw kids sitting in a large circle and the little food that they did have was gathered in the middle and shared, they ate communally, they had joy on their faces. The Lord said, “Surely I will bless and multiply their food.”

I immediately grabbed my journal and recorded everything I just shared. Now for the confirmation.

Later that day I sent my prayer group a text explaining this AMAZING encounter I had. (The day prior we had met and one of the group members sensed that God wanted to release something to me, so they laid hands on my shoulders and prayed for an outpouring of the Holy Spirit to come upon me.) As soon as I wrote the vision out in the text message and pressed send, a massive roll of thunder came in the natural. We had a crazy winter where I live with hardly any thunder that I can recall. This roll of thunder on a day that was not a thunder kind of day shook me to the core. My friend immediately responded “did you just hear that?” I told her that I had literally just pressed send and it happened. Then moments later there was a hailstorm outside, I peeked my head outside with the kids to watch, I looked up and I saw a bolt of lightning. Then, within another few minutes the sky cleared and it was blue. It was so bizarre!!!

I opened my One year Bible I am reading and went to January 20th. The two and a half pages of old testament just happened to be Genesis 41:17-42:17 which is about Joseph interpreting pharaoh’s dream about famine and giving him instruction on what to do.

My new testament was Matthew 13:24-46. My psalm for that day was Psalm 18:1-15 “With hailstones and bolts of lightening. The Lord thundered from heaven; the voice of the Most High resounded.”

My proverbs was Proverbs 4:1-6 “Get wisdom, get understanding; do not forget my words or swerve from them. Do not forsake wisdom, and she will protect you; love her, and she will watch over you.” God is so good to confirm what came from HIM!!

I believe the Lord wants to warn His people that a famine is coming, but we are not to be fearful. Many on this site are sensing the need to prepare from the Lord, but those preparations are to advance the Kingdom of God. We are to share not hoard for ourselves and our family. And, God will be faithful to multiply.

Just one more thing to share. About a month ago I had been questioning God’s prophetic call on my life. He then instructed me to look up my name Jessica, I was absolutely shocked at what it meant, it means “foresight” and “Gift from God.” The Lord sure knew how to kill the doubt that had crept in!!!