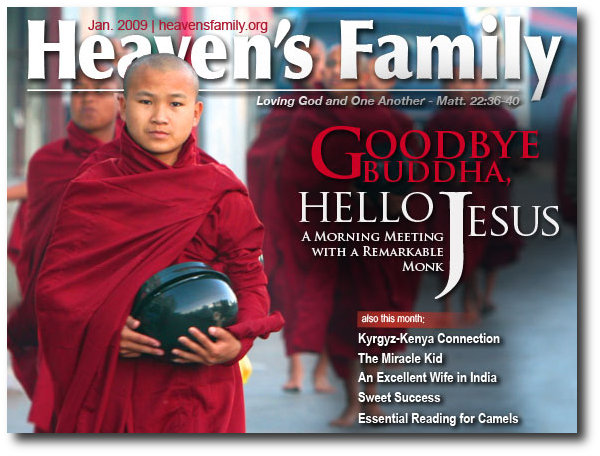 By far, the most compelling reason that a great number of other religious faiths turn their lives over to Christ is the power of love that is within Jesus. Nearly half of all Muslims who have made a shift of faith allegiance have affirmed that the love of God was a critical key in their decision.  A testimony of a former Nichiren Shoshu Buddhist finds the master he was searching for.

“I was in a train station in Japan, making a pilgrimage to the head Buddhist temple Daisekiji at the foot of Mount Fuji, when a young man — in perfect English — warned: “Beware the winds of Himeiji!” Three and one-half hours later, I was leaning over to put some postcards into my travel bag and heard someone yell a warning in Japanese. The next thing I knew, a sign weighing nearly 200 pounds came crashing down on my back. I was in shock and my right arm was paralyzed. I couldn’t believe this was happening to me!

The railroad authorities didn’t want to take responsibility for what had happened. They offered me money as a bribe; they wanted to forget the accident had ever happened. But I refused the offer, after obtaining advice from the U.S. embassy. Had I accepted the money, the embassy told me, that would have relieved the railroad authorities of all obligations and responsibility.

This episode caused me to become very discouraged, and I desperately needed someone to lean on. In a wheelchair and all alone, I decided to seek help from leaders at the Soka Gakkai Buddhist headquarters in Tokyo. But my efforts were in vain. They had no compassion whatsoever for me or my unfortunate turn of events; they simply urged me to continue my pilgrimage, even though I was confined to a wheelchair.

After this experience, I had no desire to finish the pilgrimage. All I wanted to do was go home to my loving family. So I flew back to the United States. To say the least, I was beginning to have major doubts in my mind about Buddhism.

Accidents have a way of bringing us face to face with life’s precious realities. As a Nichiren Shoshu Buddhist, I had for fourteen years invested my energy, prayers, and hopes for a better life in the philosophy of Nichiren Daishonin, a thirteenth-century Japanese monk who claimed to have found the “true Buddhism.” In the United States his followers are organized by the Nichiren
Shoshu Academy (NSA), also known as Soka Gakkai. The main goal of NSA is “Kosenrufu,” or “world peace through the propagation of Buddhism.” And for years, I had enthusiastically sought Kosenrufu.

As I reflect back on those years, it strikes me that my commitment to NSA could be questioned by none. As a young Nichiren Shoshu Buddhist, I became a member of the Brass Band — a musical group founded specifically for the young men’s division of NSA. The band was intended as a training activity for developing character in young men. As a member of this band, I attended a multitude of conventions and was often called to the headquarters for musical performances for overseas dignitaries.

It was not long after this that I decided to make a pilgrimage to Japan — a decision largely motivated by my yearning for truth. I had become deeply involved in my commitment to see Buddhism spread throughout the United States, but I found a tremendous lack of translated material. As a result, I began to search. Little did I know that I would soon uncover some things that would give me a new perspective.

Open forums and meetings with fellow Buddhists began to shed a new (and negative) light on the Buddhist religion for me. During these sessions, like-minded Buddhists began to ask questions like, “Why must we have a picture of sect President Daisaku Ikeda on the wall? Doesn’t that make it look like we’re worshipping him? Why must we wear white? Why can’t men wear beards? Why must men and women sit apart from one another? And where is all the money going in NSA?” We felt that we should have a little more control over what was going on.

During one period, some of the Japanese leadership attended the meetings and were later overheard behind closed doors saying, “these meetings must be stopped.” And so, one by one, the meetings were  stopped. This caused me a great deal of disillusionment.

As a senior leader in NSA, I encountered more and more hypocrisy in the upper leadership levels and made sincere attempts to resolve organizational and philosophical deficiencies. However, these attempts were only met by deceit, jealousy, power maneuvers, and even threats against my life. I made a last-ditch effort by talking with top Soka Gakkai leaders, but it only confirmed my need to talk to President Daisaku Ikeda, “master” of the sect, who is praised and glorified by Nichiren Shoshu devotees. (Ikeda’s
picture is prominently placed near Nichiren Shoshu altars worldwide.)

I tried to make legitimate appointments with President Ikeda by letter, by phone, and in person — only to be denied and pushed aside. But — undaunted — I was determined to see him. One day he was coming out of the World Culture Center in Santa Monica (which is the North American headquarters for NSA), and was heading for his car behind a wall of Buddhist bodyguards. I rushed across the street to within just a few feet of him and cried out to him. I _know_ that he heard me, but he refused to even look my
way. I was coldly shunned as he got into his limousine and sped away. At that point, I was a spiritually broken man. I felt totally lost.

Even after that incident, I was unwilling to abandon fourteen years of Buddhist practice, and yet I was noticing in myself more and more depravity until I could scarcely identify with a pure conscience anymore. The leaders were not the only hypocrites. I, too, was living a lie. I was painfully lost in a spiritual wasteland and was weighed down with sin. I realized that while
Buddhism had benefited me in many ways, it ultimately led to a spiritual dead end. As a great wise man, King Solomon, once said: “There is a way that seems right to a man, but in the end it leads to death” (Prov. 16:25).

But God was soon to show me the way to life.  One day a young Christian architect friend of mine, Laurie, who had been sharing with me earlier, came into the blueprint store where I was working. My spiritual hunger prompted me to confide in her that I was seeking spiritual truth. She responded by saying, “I’ve got a present for you that I’ll bring by tomorrow.” As she left, she looked back at me behind the counter and said, “I’ve been praying
for you.” I was deeply moved by her concern for me.

The next morning, there was a package waiting for me with a card on top which said, “Seek ye first the Kingdom of God and His righteousness and all these things shall be added unto you.” There were also two books: one by J. Isamu Yamamoto called Beyond Buddhism, and another by Josh McDowell, More Than a Carpenter.  After reading these books, I wondered, “Could this be the perfect Master I was seeking, but didn’t know?”

Soon after this, another Christian friend named Craig saw my spiritual confusion, and challenged me to “go home and get down on my knees and pray and ask God whether I ght in Buddhism. Often top Nichiren Shoshu leaders would mockingly exclaim, “Can you believe a religion that worships a dead man on a cross?” But here in this book was the Living Master — the One my heart had sought so desperately in men.

I was then introduced by my father to a pastor from a church in Santa Monica who shared the truth of the Living God with me. He read to me the words of Christ: “I am the bread of life; he who comes to Me shall not hunger, and he who believes in Me shall never thirst.” Convicted of my sin against a holy God, I laid down my burden at the Savior’s feet and gave my life to Him. That night, my wife — a Nichiren Shoshu Buddhist for 16 years — also
believed. What grace!

Nichiren, the self-proclaimed Japanese True Buddha that we had followed for so many years, said that if he found a teacher greater than himself he would follow him. In our case, we  were found by a greater Teacher — the Good Shepherd, the Lord JesusChrist, the eternal God, before whom “every knee shall bow.”