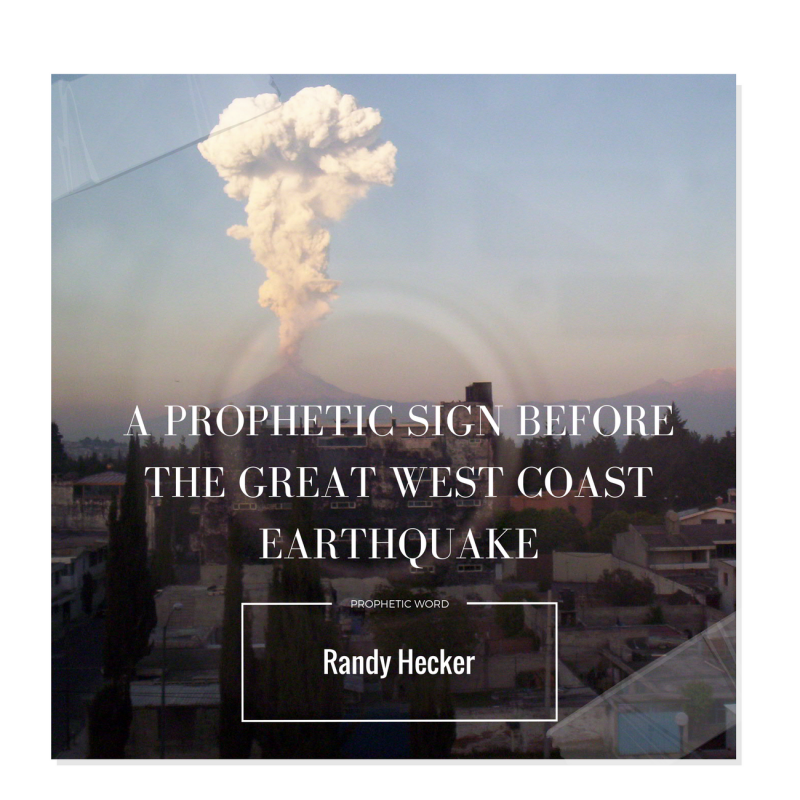 “The Lord has shown me that there would a mass migration out of Mexico and other Central American countries.  This has started but it will finally reach millions streaming north.The Lord has also shown me that the crust of the planet along the western margin of Central and North America will begin to break up before this quake., because of early effects of the incoming Destroyer.  The 4.8 magnitude earthquake outside of Las Vegas, where the water of Lake Mead is draining into the earth, is a clear indication that this has started.”

“ A massive earthquake is coming to Mexico City.  During this quake large areas of the world’s biggest city will be swallowed up and millions with die.  The volcanoes will erupt.  There will be a massive eruption of Mt. Popocatepetl.  When the smoke clears Mexico City will be no more.  Be warned that when this earthquake happens it is the final warning sign for the coming Great West Coast Earthquake.”

Posted by randyhecker  For five years now I have been warning about Mega Earthquake that will strike the San Andreas Fault and cause massive devastation to the California Southland.  I have stated that it measure between 9.5 and 10.5 but it would be preceded by two warning shocks.

I do not know the time interval between the first and second quake, or how long it will be after that before the Big One strikes.

Twice before this pattern of quakes has hit without the Big One.  But I believe now the Big One is clearly coming.  This is based on other things the Lord has shown me.  The Lord has shown me that there would a mass migration out of Mexico and other Central American countries.  This has started but it will finally reach millions streaming north.The Lord has also shown me that the crust of the planet along the western margin of Central and North America will begin to break up before this quake., because of early effects of the incoming Destroyer.  The 4.8 magnitude earthquake outside of Las Vegas, where the water of Lake Mead is draining into the earth, is a clear indication that this has started.

Recently I received a communication from a seismologist in Southern California who stated it was simply impossible for the San Andreas to generate that magnitude an earthquake.   Under normal circumstances he is completely right.  The grinding between two tectonic plates is not sufficient to generate that kind of energy.

But there are things that will generate this great event.  First is the natural capacity of the San Andreas Fault to generate 7 to 8 magnitude earthquake.  Second is the use of seismic and tectonic weaponry that will be focused on the fault line.  And third is the judgment of God upon the unrighteous.   If I was a betting man (which I am not) I would put my money on Number Three.

This is coming as surely as the dawn comes.

I am a Watchman on the Wall.  My duty is to give warning of the coming things has shown me.  I am not a prophet.  The duty of a Prophet of God is give revelation as he receives it and to call the nation unto repentance.  I will continue to give warning for as long as I can, but the time is growing incredible short.

I am sorry that it has taken me so long to return to this blog and post information.  A lot of things have happened since my last post, including three major surgeries.

Anyway, there are many things that the Lord has shown me that did not have a connecting pattern.  As an example, why would our government use its own nuclear weapons on its own citizens.  When Obama was in office anything could happen.  They have tried to start a nuclear conflict with the Russians on several occasions.

All of a sudden things they have been planning in secret for many years have come out into the open.  I am reminded of the scripture that says, “And the secret things shall be made known.”

There is a plan for California to succeed from the Union and declare itself to a free and independent country.  It is planned that Hillary Clinton shall be the President of the Republic of California. This will be a country based upon progressive principals (communism).  It will be the first step in building the Kingdom of the Beast as it will be governed by followers of Moloch.

The new capitol will be Bohemian Grove where the elite go to conduct human sacrifice to appease  Moloch.

The Republic of California will be based upon every manner of human depravity there is.  All churches will be outlawed, except those that convert to the worship of Moloch.  They will also seize the vast amount of military hardware that exists in California.  They will seize all of the nuclear weapons stored at multiple facilities.

Three times former President Obama (the future Anti-Christ) tried to initiate nuclear conflicts with Russia.  The only thing that stopped him was our generals and admirals who kept the nuclear football and the launch codes out of his hands.

Once they acquire these weapons it will only be a matter of time before they are used to burn the rest of America, and launch attacks upon Russian, China, and North Korea

The coming Great West Coast Earthquake will be the sign of God’s judgment upon them.

If you remember what I wrote about this terrible event, then recall that I said there would be two warning earthquakes preceding the big one.  There would be a 5.5 to a 6.5 out in the desert.  At an unknown time after that there would a 6.5 to 7.5 also in the desert.  This cycle has already occurred twice without the following great earthquake. These two cycles served a warning that was mostly ignored.  Now the cycle has begun for the third time with two recent 5.7 earthquakes occurring within hours of each other near Walker Lake,  Nevada.  There will not be a fourth cycle.

I am watching for the 6.5 to 7.5 quake to hit in the area of Brawley to Mexicali, California.

If you are a follower of Jesus Christ, the only Messiah and your Redeemer, then go to him in humbleness and seek the answer to whether you should leave California or stay there.  Many times the answer will be to stay because the Lord will need you there as a trusted servant.

Do as the spirit leads you.

Your brother in Jesus Christ, Randy

A Spiritual Trumpet Warning Heard In The Heavenlies- Could A Warning Be Issued?