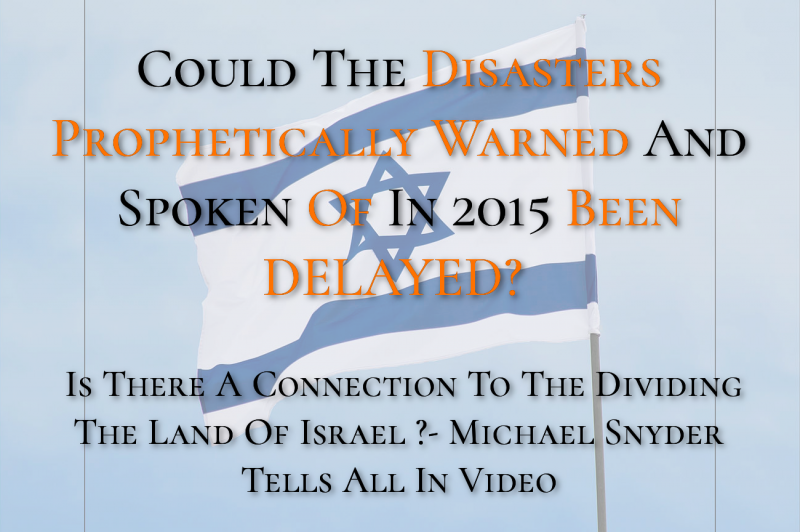 Michael Snyder shares his thoughts WHY the disasters so many women and men of God saw prophetically in 2015 were DELAYED.  Michael talks about what we should be keeping our eyes on- The dividing of the LAND OF ISRAEL.   He also walks through Rachel Baxter’s 10 prophetic judgments coming to America.  – This was taped on Aug 11th 2016 at the Jim Bakker Show

The Obama administration is absolutely furious with Israel.  At the end of July, the U.S. State Department issued a scathing press statement in which it publicly rebuked the government for Israel for “settlement activity” in East Jerusalem which the Obama administration considers to be “corrosive to the cause of peace”.  There has always been tension between the Netanyahu government and the Obama administration, but I don’t know if we have ever seen the State Department use such strong language to condemn Israeli activity.  Unfortunately, the rapid deterioration of the relationship between the United States and Israel could have some very serious implications for the entire region in the months ahead.  As you will see below, Newsweek is reporting that France is ready to make a renewed push for a UN Security Council resolution that would formally establish a Palestinian state, and this time around the Obama administration may be ready to go along with such a resolution.

The core issue that is causing so much contention between the United States and Israel right now is the expansion of housing in areas of East Jerusalem where Jewish people already live.  The Netanyahu government doesn’t see anything wrong with this, but the Obama administration wants those areas of East Jerusalem to be handed over to the Palestinians as part of any peace deal.  So the fact that more Jewish homes could be built on land that the Obama administration believes will soon belong to the Palestinians is making them very angry.  The following is the entire press statement on this matter that was published on the official State Department website.  I have bolded certain areas for emphasis…

We are deeply concerned by reports today that the Government of Israel has published tenders for 323 units in East Jerusalem settlements.  This follows Monday’s announcement of plans for 770 units in the settlement of Gilo.

We strongly oppose settlement activity, which is corrosive to the cause of peace. These steps by Israeli authorities are the latest examples of what appears to be a steady acceleration of settlement activity that is systematically undermining the prospects for a two- state solution.

In just the past few weeks, we have seen reports of the advancement of plans for 531 units in Ma’ale Adumim, 19 in Har Homa, 120 in Ramot, and 30 in Pisgat Ze’ev; the advancement of a plan to retroactively legalize an outpost near Ramallah; and the issuance of tenders for 42 units in Kiryat Arba.

As the recent Quartet Report highlighted, this is part of an ongoing process of land seizures, settlement expansion, legalizations of outposts, and denial of Palestinian development that risk entrenching a one-state reality of perpetual occupation and conflict.  We remain troubled that Israel continues this pattern of provocative and counterproductive action, which raises serious questions about Israel’s ultimate commitment to a peaceful, negotiated settlement with the Palestinians.

But in Israel, they see things very differently.  Thousands of Jewish people already lives in these areas, and the Netanyahu government has already stated that it has absolutely no intention of dividing the city of Jerusalem as part of any peace deal.  Israeli authorities were quite alarmed by this recent State Department press statement, and the Jerusalem Post went so far as to accuse the State Department of essentially siding with Palestinian terrorists…

But above all, in fixating on settlements, the State Department is deliberately turning a blind eye to the mortal danger of Islamic terrorism and the hatred of Jews that permeates Palestinian society. In so doing, the department is in fact giving a green light to the Palestinian leadership, media and administrative bodies that openly incite, encourage and support terrorism, violence and boycotts against Israel.

By the same token, the State Department is giving sanction to the EU and its constituent member states, as well as to the UN and its specialized agencies to exacerbate their hostile policies against Israel. By their logic, if the US State Department takes such a slanted and hostile position, they can now exacerbate their own hostility toward Israel.

Something appears to be very, very wrong within the State Department.

Neither side is going to back down, and in the weeks ahead this may be the impetus that causes the Obama administration to finally do something that it has long considered doing.  About this time last year, the French were ready to go ahead with a UN Security Council resolution that would have divided the land of Israel and set the parameters for a Palestinian state, but the Obama administration wouldn’t go along with it so the French backed down.

But now the French are ready to move forward again, and Newsweek is reporting that we may see something happen before the next U.S. president is sworn in…

The recent U.S. condemnation is anything but overstated; it is an indication of mounting global concern over the imminent extinction of the two state solution. In the next six months, until January 20, 2017, the window for saving it remains open, albeit narrowly.

In a courageous attempt to sustain the fumes of hope for the two state paradigm, the French government is driving an initiative to convene an international conference in 2016—a tent for organizing consensus toward a draft U.N. Security Council resolution to revive peace talks. If the conference can achieve the support of nine out of 15 Security Council members for its suggested draft-resolution, with the U.S. agreeing not to exercise its veto, the two state solution will be able to cling to its ninth life.

Barack Obama knows that he only has a few months left to make his mark in the Middle East, and a few months ago the Wall Street Journal reported that for the very first time the Obama administration was publicly admitting that a UN Security Council resolution that would divide the land of Israel was on the table…

At this point, we don’t know if this will or will not happen by the time Obama leaves office.

But we do know that the French want this resolution to happen, and the only member of the Security Council that would be in a position to block it would be the United States.

So what will Obama do?

Only time will tell, but we will find out soon one way or the other, because Obama’s time in the White House is rapidly drawing to a close.