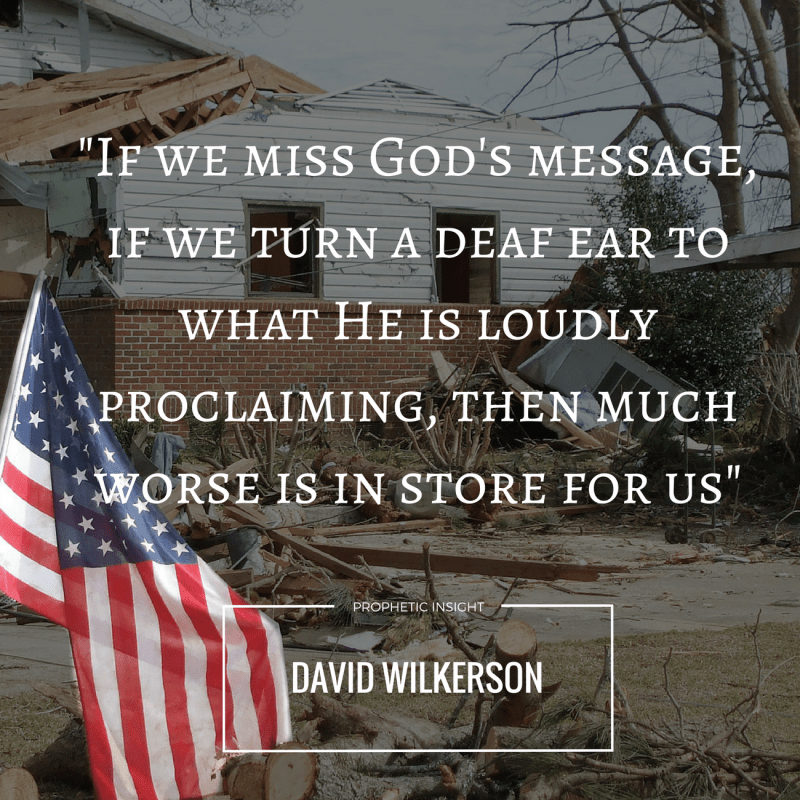 Ministers and theologians everywhere are saying, “God has nothing to do with disasters. He wouldn’t allow awful things to happen.” Yet, nothing could be further from the truth. This kind of thinking is causing our nation to rapidly miss the message God wants to speak to us through tragedy.

The fact is, we have to have a word from God. Like many pastors, I’ve wept and grieved over awful calamities. I’ve sought the Lord in prayer and through His Word. And I want to tell you, I’ve experienced a grief that’s even deeper than the mourning for innocent people dying. It’s a grief that says if we miss God’s message, if we turn a deaf ear to what He is loudly proclaiming, then much worse is in store for us.

The prophet Isaiah speaks directly to what we’ve experienced. If you object to using the Old Testament for examples, consider Paul’s words on the subject: “All these things happened unto them for examples: and they are written for our admonition, upon whom the ends of the world are come” (1 Corinthians 10:11). Paul makes it clear that the examples of the Old Testament reveal just how God moves in times like ours.

At the time that Isaiah prophesied, God had been dealing patiently with Israel for about 250 years. The Lord had sent “light afflictions” upon His people, calling them to repentance. He was trying to woo them out of their brazen idolatry and back into His blessing and favor.

All the prophets throughout the years had spoken to Israel the same essential word: “Humble yourselves.” Scripture says, “They served idols . . . yet the Lord testified against Israel, and against Judah, by all the prophets, and by all the seers, saying, Turn ye from your evil ways, and keep my commandments and my statutes” (2 Kings 17:12-13).

But God’s chosen nation rejected His call to repentance. “They would not hear, but hardened their necks” (17:14). These people mocked the prophets who called them to humility. And, instead, they “followed vanity, and became vain . . . and they left all the commandments of the Lord their God . . . and sold themselves to do evil in the sight of the Lord. . . . Therefore the Lord was very angry with Israel” (2 Kings 17:15-18).