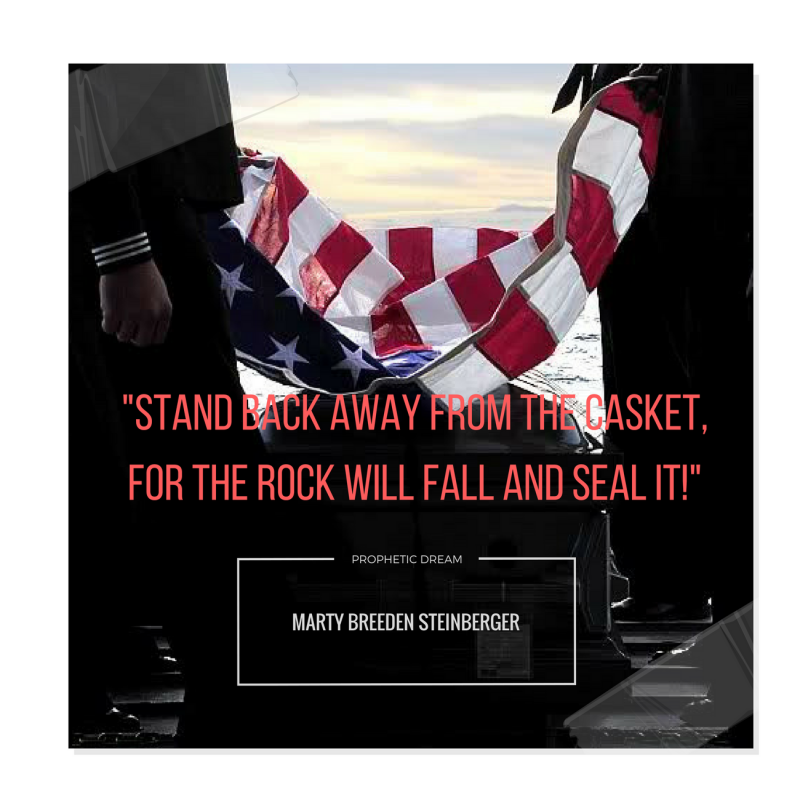 “I have had, what I consider to be 3 significant and prophetic dreams since December 18….then Another on January 4,….then the last one on January 27th. I’m very aware that certainly not all dreams , nor prophetic, nor to be shared….some I’ve had have been specifically for me. I, being the typical 52 year old Daddy of 2 daughters and husband, and Cop running in a thousand directions can hardly remember my own name at times!,….but when I have a dream that I know is from the Lord, I awake with absolute PERFECT recall of every detail and sequence….then I know. Provided that it’s always weighed against and in complete harmony with the Holy scripture.!!….this was one of those indeed”

I told the officiants that the funeral could not start yet,and that they were not ready, because the casket had not been sealed.I then heard the Lord say…”Stand back away from the casket, for the rock will fall and seal it!”Normally the caskets would be sealed as called for, but on this occasion, a huge rock fell from the top of the post ONTO the American flag that was already loosely draped over the coffin, sealing it with great force….the rock remained on of top coffin.The officiants handling this funeral were obviously drunken and ill prepared.

They were mocking and disheveled and I could hardly believe their lack of care or concern over this sacred event.

The “professional church” is STILL standing back drunken with the world and the things of the world. They clearly see the death around them but they do NOT take it seriously, they do not count the cost, they do not care.

Regardless, and still,the “Rock” is about to fall on America, and sealing it in a way that no one ever expected. The ones standing and watching “Guard” at this time are not the “professionals”, but it is the no named seemingly out of place persons that are  clearly hearing that the “Rock” is about to fall….heeding the warning until they hear the Lord say “Step Back now!”…Something is coming…….and it’s big and it’s sudden and it’s life altering!

The setting was in a huge auditorium, where the casket was draped in the U.S. Flag.  Over the intercom, the people were to remain seated as the President makes his entrance. An unusual event happens.  The Presidential limousine drives into the auditorium and flips on its side.

Pastor’s dream is reminiscent of Justice Antonin Scalia.  Pastor Begley then talks about a stand  or riser that Justice Scalia was laid to rest on had not been used since Abraham Lincoln’s assassination.