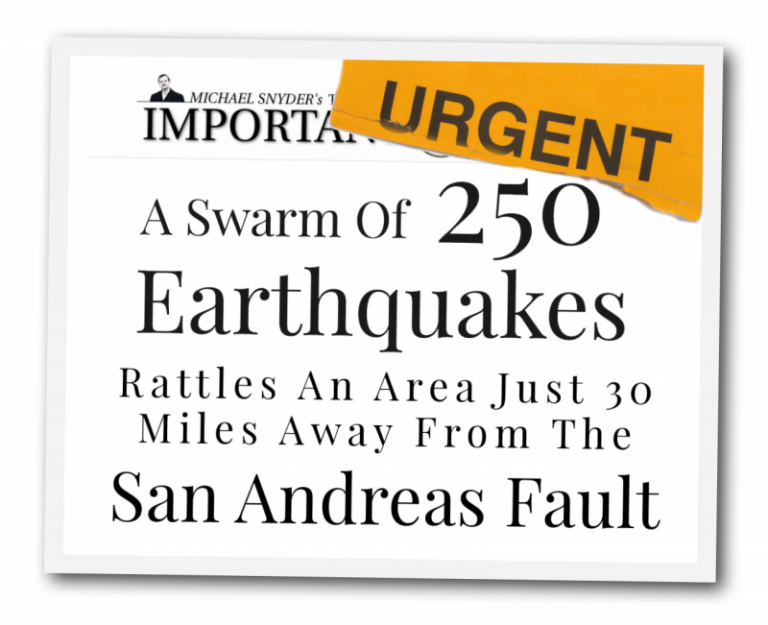 The Most Important News.com

We definitely have already seen quite a bit of “shaking” in 2017, and the new year has only just begun.  Since New Year’s Eve, there have been more than 250 earthquakes near the border between California and Mexico.  These quakes appear to be centered around the town of Brawley, which is only about 30 miles away from the San Andreas fault.  But even before the new year began there was a tremendous amount of shaking in the region.

In fact, on December 28th the Daily Mail reported that almost 700 earthquakes had shaken California and Nevada over the previous week.

Many experts are concerned that all of this shaking could be leading up to “the Big One”, and a lot of people living in southern California are deeply alarmed right at this moment.

The area where these latest earthquakes have been happening is known as “the Brawley Seismic Zone”.  It actually connects the San Andreas fault with the Imperial fault, and according to the Los Angeles Times, scientists tell us that this is a place where “the Earth’s crust is getting stretched out”…

The earthquakes struck in the southern end of the Brawley Seismic Zone, a seismically active region where tectonic plates are moving away from each other and the Earth’s crust is getting stretched out “and basically adding land,” said Caltech seismologist Egill Hauksson.

The Brawley Seismic Zone is particularly important to watch because it is the region that connects the San Andreas and Imperial faults, both of which can produce damaging earthquakes. The seismic zone extends for about 30 miles from the city of Brawley, across the Salton Sea’s southern half, and ends near Bombay Beach.

Fortunately this latest earthquake swarm occurred at the southern end of the Brawley Seismic Zone and not the northern end.  Because as the Los Angeles Times tells us, quakes on the northern end can potentially “trigger a major event on the San Andreas fault”…

Earthquake swarms that occur in the other end of the Brawley Seismic Zone — to the north — could trigger a major event on the San Andreas fault, one of California’s most dangerous, that could send catastrophic shaking into Riverside, San Bernardino and Los Angeles counties.

In late September, one such swarm began in the northern Brawley Seismic Zone, with three measuring above magnitude 4. That event led the U.S. Geological Survey to warn that chances of a magnitude 7 or greater earthquake on the San Andreas fault had risen as a result of the swarm.

Hopefully this current surge in earthquake activity will not lead to a major catastrophic event.

But experts assure us that it is inevitable that a major catastrophic event will hit the region someday.  For example, just consider what Thomas Jordan recently told a stunned audience at one conference…

Experts have warned that the fault line has been quiet for far too long and is due to erupt at any time.

Thomas Jordan, director of the Southern California Earthquake Centre, told a conference in Long Beach: “The springs on the San Andreas system have been wound very, very tight. And the southern San Andreas fault, in particular, looks like it’s locked, loaded and ready to go.”

Seismologists have said that over the past 1,400 to 1,500 monster earthquakes have ruptured at 150-year intervals.

And scientists are discovering that the great earthquake that is coming to southern California could ultimately end up being far more devastating than they had originally been anticipating.  In a previous piece, I quoted a Fox News article which talked about a major study that came to the conclusion that the 800-mile-long San Andreas fault “could unzip all at once”…

For years, scientists believed the mighty San Andreas—the 800-mile-long fault running the length of California where the Pacific and North American plates meet—could only rupture in isolated sections.

But a recent study by federal, state and academic researchers showed that much of the fault could unzip all at once, unleashing a rare, singular catastrophe. Now, insurers have used that research to come up with a new analysis of the damage that could be caused by statewide break of the San Andreas.

I don’t what is going to happen next, but just as I have been writing this article there have been more earthquakes in California and Nevada.

Throughout 2016 our planet showed that it is becoming increasingly unstable, and 2017 is already starting off with a whole lot of shaking going on.

At some point a catastrophic earthquake is going to occur, and it may happen when we least expect it.