Jim Staley released a prophetic word on January 12, 2022 which is a message that talks about a new turn.  It also talks about a coming judgement, a separation of people, but also hope for the people of God.

The word talks a new adventure for those who walk closely with God.  Perhaps even new missions, provisions for groups of believers.

It also seems to hint to the end time prophecies we have been waiting for with Ephraim, a wilderness, and His bride.

Here is the transcript of message:

Jim Staley :  I received early this morning. I was praying in the spirit for probably well over 30 minutes and after I finished the spirit made it very clear that I am to write down everything that I heard in the spirit.

So I’m a little shook up right now. I’ve never received a word from The Lord of this magnitude and of this weight and I feel like I’m shaking under its weight.

So I’m just going to read this as I heard it and and I’m going to say no more. This is really hard. 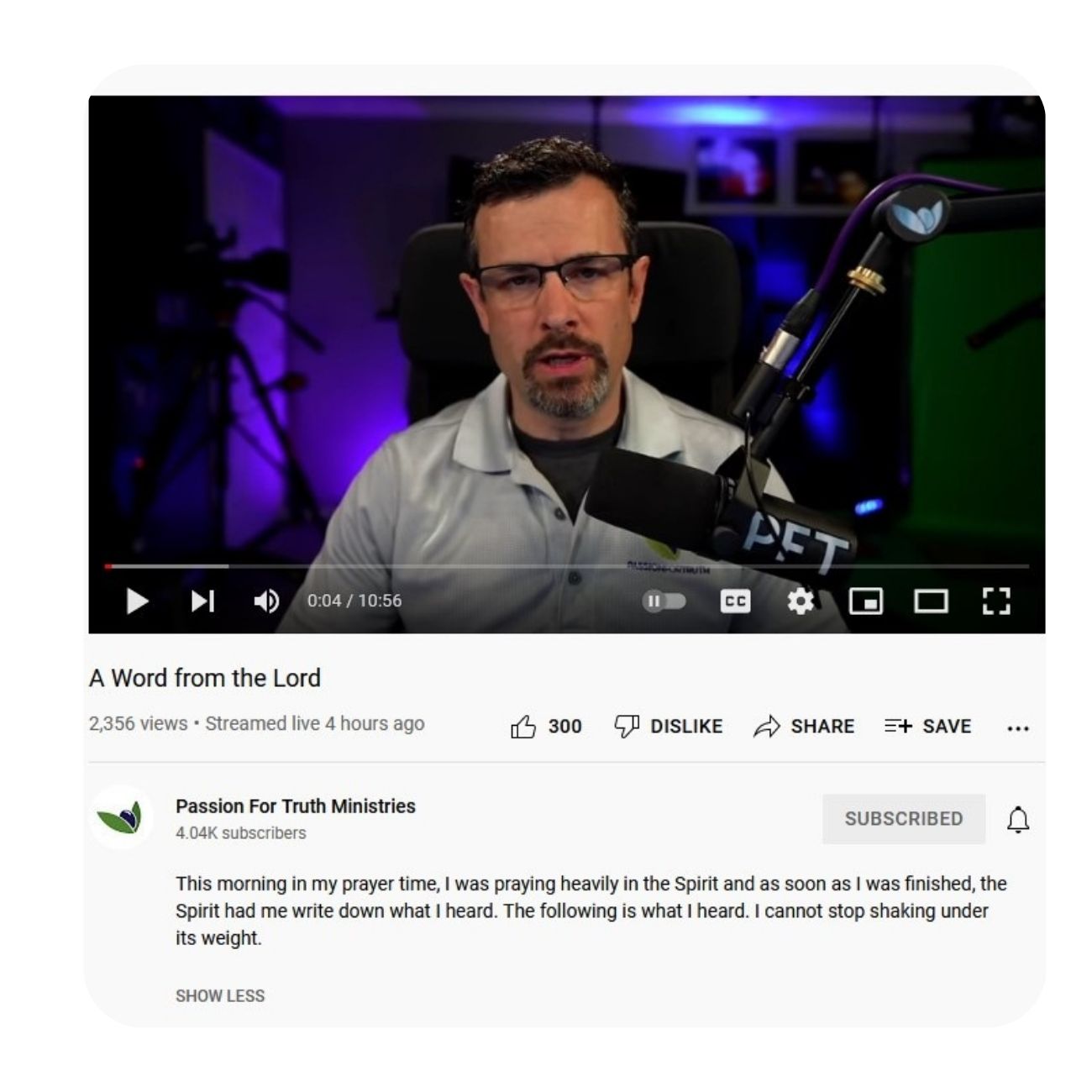 This is the moment of judgment among my people. The Wilderness is over and the banks of the Jordan overflow and excitement for this day. The mixture in the heart and on the hands of my people shall be no more. Only those with clean Hands and a pure heart shall pass. Only those that hold loosely to the sands of their past will be chosen.

I have set apart a new generation to carry my heart and to carry out my will. I will wash the loose sand in the waters of crossing.

I have put my hand up against all that is not purely of me and no amount of human equity will bring to pass that which I have reserved for my chosen ones.

The Wilderness generation was filled with jealousy, deceit, wayward hearts and their own agendas. They spent no time in the dark with me and they cared little about keeping the law of the internal and eternal.

Iniquity was found in them and the way was blocked by my very hand. My Holiness will not be sold or cheapened and I will not be paraded on anything but the litter of my word. And all those that choose to do so will find the fate of Uzza at their door.

Now is the time and today is the day of the new season. This is the season of flooding. The season will bring the Paradox of flooding and dryland crossings.

A tsunami is coming and will carry my chosen ones in the spirit across the banks of the Jordan into the first step of the promised land.

Their hearts are already being circumsized in the sands of their flesh are being washed from them as they cross the dividing river that separates the way of the 10 from the way of the two.

You are living in the days of deja vu, where things that were begun in the Flesh shall be redone in the spirit.

There will be a likeness of familiarity but the mixture will be removed. The end result will be my original plan and the fingerprints and mans signature quote power of attorney will no longer have authority over my will in my ways.

And all those that refuse to repent and confess will be stripped naked before me and before men.

The times are short and my will is sure.

The days of Slumber are over and Ephraim shall be awakened to the fields of his former glory. My temple is being cleaned and the road of my spirit is being paved.

In the gilgal, My true name will be known. My heart shall be infused into Joshua and Caleb and the power of their Unity shall shake the foundations of the Earth.

The chosen ones from the desert have been inaugurated even now for a task to take back what was before mine and still is.

The wheels beneath my Throne are turning even now. In the eyes of my holy ones around me have open wide in the desert to discern the hearts of men.

Those who have called themselves my people are not all my people.

The four faces shall discern in the wings of my Throne shall blow back all those that have chosen to bring to me and Unholy sacrifice of their own praise.

This is the moment where the scale of prayer is before men.

This is the time when the true weight of the worth of men will be before me.

All that is found lacking on that scale will be burned in the fire of my very presence in all that is artificially placed there by the secret motivations of the heart will be removed not only from the book of incense recordings but removed from the book of remembrance of their very name.

The time of empowerment has come and the groaning of my chosen ones have been heard in the desert.

No longer shall they be unequally yoked with those that know not my heart, or know even less about my Spirit or my true ways. The yolk is being broke at the boundary stones of the river.

And my angel is being re-commissioned to lead my bride into the very soul of my first step with them.

The musicians are being gathered and the Warriors that have been trained through the Holy Fire that flows from my Throne or about to meet.

You are living in the days of deja vu and once again my people shall see the walls of the Fortress fall before them.

But this time before the healing of their circumcision is even complete.

Before the horn is blown in before the enemy realizes his demise the walls will fall.

The bones of Joseph shall unite and the children of Rachel shall arise to sing praises and a temple not bait made by human hands.

My judgment is now.

And my grace will find its line at the boundary Stones within the river of separation.

I Will Blast from my nostrils and the river will be open for my holy ones.

No resistance is there anointing.

Favor shall flow for my throne and that way seems impossible will be there daily food.

They will drink from my cup and I will commission them with the anointing of Nehemiah.

They will be sustained and even funded by unlikely sources as I transfer from one account to another while they are sleeping.

All we’ll see but only the those who have clean hands and a pure heart will actually eat from the grapes and drink from the new wine of my favor.

News will travel far and wide that the Giants are falling but only my chosen ones will feel the shaking of the ground beneath their feet and a fire of my presence before them.

The light of my Flames will become more dim to those who chose to stay in the comfort of their own desert.

They will retire into the sunset like they have retired the true power of my word.

My love for them is great but my favor is with my chosen ones who left the foreskins of their hearts on the hill at the Crossing.

These are the ones who truly understand the processional of my ways that encircle my throne.

The memorial stones of Manasseh are calling out and his children are being moved into place.

A new season is coming with that a flood of favor for all those that have ears to hear and eyes to the see the seasons of my ways.

That which can be shaken has been and will be shaking.

That which remains will remain and then be carried under the Wings of Fire into battles already won.

The walls of my city will be raised again in my ways will be established among men although they will be despised by those that can still see from the other side of the dividing river that flows for my throne.

The Echoes of dissension are waning in the trumpet blast of my holy one that leads my people is drowning out the frequency that is polluted my temple.

These are the days of separation, circumcision, and the release of my favor.

These are the days of my holy flood.

These are the days that my holy ones will be drawn from the river and separated from their brothers.

They will be raised by the royalty within my Gates and empowered to lead armies unaware to them at the moment.

This is the moment of salvation for my people and the Songbird of spring has already begun to pierce the darkness of winter.

Before he finishes his song my people will have crossed into the first step of my favor.

The scales of prayer are before me in the hearts of those who call on my name or in the eyes of my fiery ones that Minister before me.

The river swells at my very thought for my beloved.

Crossover my beloved for you are mine.

Crossover in the midst of your brothers for they know not the heart of my ways and they will be left to build their own cities in the very Sands of their own minds.

The Judgment starts now at the feet of those carrying the heart of my true Covenant.

The boundary stones are being laid at the feet and the promise is secure.

The children of Joshua and the daughters of Caleb were about to eat from the fruit of my land.

Do not look back across the river from which I have taken you.

For the heads of grain or before you even now.

Harvest them and live in Tower.

For Mana was only for the weak-hearted but you my beloved or not weak but are strong in my spirit.

My natural will will be manifested in yours and the manna generation will not recognize it as from me.

You shall eat from the fruit of the land I have set before you because your faith has exceeded the need of mana and you did not need to see miracles to believe me.

Your satisfaction was just in knowing I was with you all along.

And so your centurions faith shall raise up the gates of the Ancient of Days in the land and All Shall hear the works I do before you.

So humble yourselves and bow before the scales I have placed at The River’s Edge.

For my judgment has begun and the bridal gown of my beloved has already been taken to our chamber.

Other prophetic words that relate: